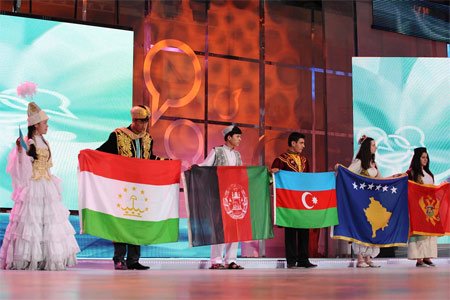 Foreign students from 135 countries will attend the 10th International Turkish Olympiads, which brings together hundreds of foreign students each year from Turkish schools established throughout the world.

A total of 1,500 students will compete at this year’s Olympiads, organized by the International Turkish Education Association (TÜRKÇEDER), in singing and poetry recitation contests, fascinating audiences with their outstanding performances of popular Turkish songs and well-known Turkish poems.

The theme of this year’s Olympiads, which will run from May 30-June 14, is “İnsanlık için el ele” (Hand-in-hand for humanity). Last year’s slogan was “One language, 7 billion people,” signifying the world uniting under one common language.

This year’s competitions will be predominantly held in Ankara and İstanbul, but there will also be activities in 38 other Turkish cities.

Ankara’s Kızılcahamam Asya Thermal Complex will host the Turkish-speaking children of the world for the duration of their two-week stay.

Foreign schools whose students attend the Olympiads will be able to set up tables to introduce their cultures at a cultural festival to be held mainly at the İstanbul World Trade Center.

Tuncay Öztürk, secretary-general of TÜRKÇEDER, told Today’s Zaman that interest in the Olympiads increases with each passing year. Regarding the theme of this year’s competition, Öztürk said, “Our aim is to bring together all people in an atmosphere of love and dialogue.” He added that the Olympiads will be a feast of Turkish language that will be celebrated enthusiastically in every corner of Anatolia.