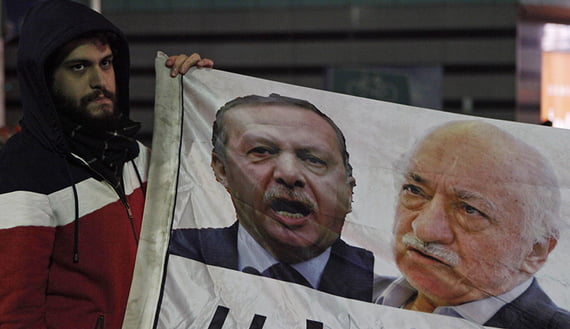 Erdogan’s approach to this scandal, however, is best challenged — surprisingly — by his very own party members. Justice and Development Party (AKP) Burdur Deputy Hasan Hami Yildirim resigned on the last day of 2013, bringing the total resigned deputies from the ruling party to seven.

“It’s necessary to correctly identify the problem and the request,” he said Dec. 31. “The issue is not to cut short Turkey’s growing success story. The issue does not embed a conspiracy, foreign powers’ intervention, a mob or a gang. And it certainly is not a coup attempt against the government. In simple terms, the problem and the request is a call for democracy. The people demand that the ruling party not cover up these corruption allegations, but faces them, to come clean.”

Yildirim added, “If, however, there needs to be a conspiracy, I believe that conspiracy is the government’s approach in presenting anything negative about its policies as a conspiracy.” Other resigning deputies echoed Yildirim and warned the public that the government is trying to cover up the corruption allegations, and that is not acceptable.

The AKP’s deputy chair, former Justice Minister Mehmet Ali Sahin, said Dec. 30, “I heard about a criminal case about a well-known businessman. He has been convicted in a criminal case in the lower court. The case then was brought up to the High Court of Appeals. There, a judge known as the ‘imam of the Cemaat’ [the Gulen religious movement] — I withhold his name, but I know who he is — prepares a brief summary of the case and sends it off to Pennsylvania [where Gulen lives] to get his opinion on the ruling.” Sahin gave no specifics about the date or the names involved. “I asked myself how a judge could do such a thing, but when I investigated, I reached the conclusion that this judge did act this way.” Sahin also stressed that Gulen advised the judge to rule according to the premises of the rule of law.

In response, the High Court of Appeals issued a written statement Dec. 31 calling for Sahin to share what he knows about this case so that it can take the appropriate legal action to prevent such a thing happening again.

“These accusations as publicly stated do not constitute enough factual information to reach a conclusive judgment. If [Sahin] provides us with factual data about this allegation, we will immediately start the legal procedure,” the statement read. Sahin responded that if the court makes the official proper appeal to learn what he knows, he will share it.

The Union of Judges and Prosecutors, however, filed a legal complaint. The Ankara chief prosecutor’s office announced Jan. 2 that an investigation was opened to see whether this accusation has any truth. Sahin will be called for testimony and will be asked to share what he knows about the case. Legal analysts state that if this allegation is confirmed, it is going to have an effect on all judges, as no one should surrender his or her independent judgment while deciding on a case.

Burhan Kuzu, head of the parliamentary constitution commission, also sent out two controversial tweets on Dec. 31, speculating that the government prevented a major witch hunt in state institutions clearing all Gulen followers. “In an intelligence report presented to the prime minister,” Kuzu wrote, “There are 2,000 senior members of the police force, academia, bureaucrats, judges, prosecutors, journalists and businessmen who make up the parallel state within the state. A witch hunt that would take place in 42 provinces was prevented.”

While Kuzu later explained that this was not something known to him, but that he read it in a Turkish daily, many opposition party members and analysts fiercely reacted, asking how, then, he could explain why the government dismissed more than 700 police officers since the corruption scandal broke last month, and stressed that labeling people in whatever shape and form — based on their religion, ethnicity or whatnot — is against the norms of any democracy.

Kuzu tweeted Jan. 2, “I don’t understand one thing: I really don’t understand why our friends in the Cemaat take it upon themselves when we talk about a state within a state.” The answer, however, should be clear. The prime minister said Dec. 27, “We took issue with the private tutoring halls, and see where this issue came up to!,” which was an open reference to the Cemaat, as it runs a significant share of the country’s private tutoring halls, and the organization publicly opposes the government policy that closed them.

The Turkish chief of general staff has also officially asked for a retrial of his members behind bars. His application cites Erdogan adviser Yalcin Akdogan’s Dec. 25 statement, in which he publicly wrote that the Cemaat “had conspired against its own military.” Over 200 military personnel have been convicted of being members of a terrorist organization called “Ergenekon,” aiming to bring down the Erdogan government. Although the conviction is a private and individual matter, the public perception has been that they have been thrown behind bars as scapegoats to white-wash the troubles that were created by the country’s past military coups, although the evidence that led to their long-term imprisonment was all found to be forged.

Whether to trust the country’s judiciary at this stage is becoming challenging, but one thing is clear: On Jan. 2, another Istanbul court denied the request of those arrested in the graft probe — Halkbank CEO Suleyman Aslan, the interior minister’s son Baris Guler and 10 more — to be released pending charges on the grounds that there is enough evidence that ties them to the charges, and that they constitute a flight risk and may destroy the evidence. And with that, the ultimate questions waits to be answered: Is there corruption or not?