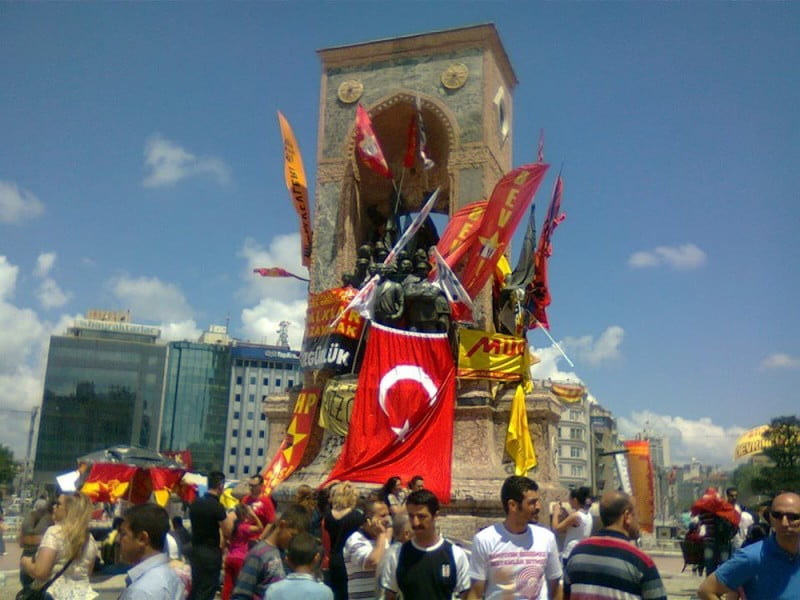 My phone began ringing at 4 a.m. in San Antonio. Still half-asleep, I stumbled on to the internet and slowly began to grasp the events unfolding in my former home nearly 6,000 miles away in Istanbul, Turkey. It was March 4, a Friday, and the government had seized Zaman, the country’s largest newspaper and one of the country’s last remaining independent news outlets.

For 17 years, Istanbul had been my home as an expatriate living and working in Europe’s largest city, where East meets West, home to 15 million Muslims and Christians, a city so old it’s had many names: Constantinople, Byzantium and now Istanbul. Its ancient heart is a UNESCO World Heritage site.

It’s the capital of Eurasia, crossroads to the five billion people who live in Europe and Asia. And it’s under the ever-tightening grip of  the city’s former mayor, longtime prime minister, and now President Recep Tayyip Erdogan, who has shown less and less tolerance for political and public dissent to his policies or even his very ideas.

I repeatedly tried my former editor’s number. Finally, after hours had passed, I reached her in the newsroom, where she said they were awaiting the arrival of the Turkish police. Staff members frantically posted updates online before all operations were shut down. No one knew exactly what was coming. It could be a shutdown, firings, perhaps even arrests and violence. The only thing the Zaman journalists could do was wait, and the only thing I could was watch from afar.

From the roof of the building housing Zaman, cameras broadcast images of the growing crowd on the street in front of the complex and the employees gathered inside the front gates.

Chants rose in the air: “Free press cannot be silenced.”

It felt surreal to be staring at a computer screen in San Antonio, watching as riot police opened fire on the crowds with water cannons and tear gas. Zaman’s employees opened the gates to police without resistance, but they, too, were met with tear gas, which wafted in clouds that engulfed the building.

The newspaper once was sympathetic towards the goals of the ruling Justice and Development Party (AKP), but the ties between Zaman and the Erdogan government quickly unraveled in 2013. Zaman openly criticized the handling of nationwide protests that summer, the government’s stance on the Syrian civil war next door, and the administration’s growing hostility toward Israel.

When Zaman supported the investigation into corruption charges leveled against Erdogan, still prime minister at the time, and his inner circle, he struck back against the political opposition. He declared the Hizmet movement inspired by Fethullah Gulen, a moderate cleric residing in the U.S., a terrorist organization.

Hizmet promotes interfaith and intercultural dialogue, education and secular democracy. Erdogan once had close ties to the group. However, as his grip tightens on the country, criticism is no longer tolerated. Television stations and media outlets are shut and journalists jailed. Academics calling for peace are arrested. High school and college students continue to be dragged from classrooms for posting critical comments on their personal social media accounts. Citizens can be labeled a terrorist or traitor if they voice any objections.

A banner inside of Zaman in June 2015 before the seizure:  “We Will Not Be Silenced.” Photo at the top right corner is Ekrem Dumanli, former editor-in-chief. Photo by Kathy Hamilton.

As I watched the takeover from afar, well-meaning friends sent messages saying how glad they were my son Ali and I had left Turkey only months earlier. I had worked as an Istanbul-based freelance journalist for 17 years. Ali was born and raised there. I was a correspondent and weekly columnist for Today’s Zaman, the newspaper’s English edition of Zaman, for nine of those 17 years.

My family’s relationship with Istanbul changed in the summer of 2013. As the Gezi Park protests morphed from an environmental sit-in against the razing of one of the last green spaces in the city to a nationwide outcry against an increasingly repressive regime, millions began to demand human rights and freedom. Peaceful protests were met with police violence: tear gas, water cannons, rubber bullets and even live ammunition. City-wide lockdowns meant that police were planning particularly brutal raids. When lockdowns were announced, people marched from all corners of the city to the affected areas in support of the protests.

Although only certain neighborhoods witnessed street fighting between police and protestors, everyone was affected as the country’s population grew increasingly polarized. Thousands were arrested for taking part in protests, more than 8,000 were injured on the city’s streets, and 11 citizens were killed by police. Physicians were arrested for providing unauthorized emergency medical treatment to those attacked by police. Lawyers waited at police stations 24/7, to represent protestors pro bono and ensure that they were not mistreated in detention. A virtual countrywide news blackout of the continuing unrest meant that the real news came from independent news outlets and social media.

This was the summer Ali, then 12 years old, learned to cut the effects of tear gas by rubbing lemons or liquid antacid on his face. We never left home without swim goggles and bandanas in our pockets because there was no way of knowing when police would attack without warning. Before leaving home to cover the protests for international media, I quizzed Ali on what he would do if I did not come home or answer my phone. With tears in his eyes, Ali carefully recited his memorized instructions.

A group of security police. Photo by Kathy Hamilton.

We both knew if I did not come home, the only reasons were that I was arrested for reporting news, in the hospital after being beaten by police, or killed. As the riot police attacking peaceful protestors grew more violent, my son begged me to start wearing a Kevlar vest while reporting. We both knew, though, that a vest would do little good. It was common knowledge on the streets that the police were firing tear gas canisters directly at heads of protestors and reporters covering the protests..

Friends and colleagues were arrested for reporting news or writing critical comments about the president in print and on social media. We began to fear unexpected knocks at the door late at night. Citizens were arrested for ‘liking’ Facebook posts or retweeting anything critical of the government. Everyone began self-censoring their words, first in public, and then even with friends and family. A simple disagreement or argument could cause resentments that resulted in the offending party turning to the police with a charge that someone had insulted the president.

In spite of the growing authoritarianism, we desperately clung to our city, hoping the political environment would change. Surely, we thought, the day would come when we awoke from this nightmare of police violence and government intimidation. That would not happen.

Finally, Ali and I agreed it was time for us to leave our beloved city. We told friends that our move back to my hometown of San Antonio would allow Ali to enroll in an American high school, and allow me to be close to Nancy, my aging mother, who was experiencing health problems. The explanations were true, but the reality is we were being driven out of our home by oppression. We no longer had the stamina to remain, and more importantly, we did not have to stay. Unlike everyone else, we had another home awaiting us.

Our adjustment has not been quick or easy. Arriving with four suitcases, we camped out in my mother’s one-bedroom condo while I looked for work. We lost our close-knit support system. We do not understand First World problems. We remember the burn of tear gas. We cannot forget the sound that water cannons make before they open fire. We still see the hatred in the eyes of riot police. There is no way to shake the images of refugees desperate to escape the war. We feel guilty for leaving friends behind.

Before the live feed was cut from the Zaman building on that Friday in March, I watched police shoot rubber bullets into the crowd gathered to protest the paper’s seizure. Bloodied, the crowd retreated, still screaming for free speech but knowing hope was gone. Further calls to colleagues went unanswered as police searched the building,  threatening employees who objected.

Internet and intranet were shut down, effectively stopping all interoffice and outside communication. The following week, all of the online archived articles of both the Turkish and English editions of the paper were deleted as part of the seizure, destroying years of work by me and my many colleagues. Trustees appointed by the government-controlled court were determined to erase any record of criticism.

Ali is now a freshman at Churchill High School. We live 10 minutes from Hardberger Park. It’s peaceful now. Together we are starting over in San Antonio.

Top image: Ataturk statute in Taksim Square during the barricading of Gezi Park by protestors to keep police out in June 2013. Photo by Kathy Hamilton.