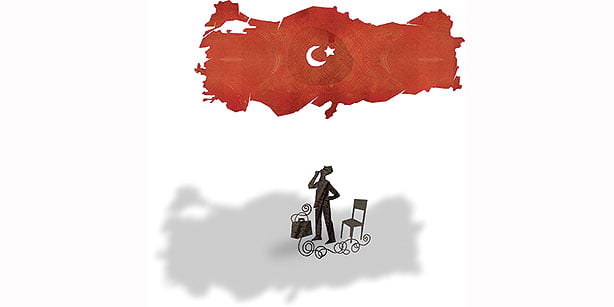 In the wake of the Dec. 17 corruption operations that took place in Turkey, the government removed and changed such an extraordinarily high number of people from their positions in the police force, the justice system and the national education structure that these changes certainly would not have been possible in a state of law.

An attempt was made to see these changes happen within the framework of heavy propaganda about the concept of the existence of a “parallel state.”

What has occurred is that the ruling party has accused the Hizmet movement of forming a structure that works as an alternative to the government; this is what the government is referring to when it refers to the “parallel state.”

Until now, these accusations have all elicited consistent and strong responses from academic as well as political circles, in Turkey and abroad. Despite this, little examination of the government’s use of the phrase “parallel state,” and what it means conceptually, has actually occurred. Personally, I believe we are experiencing a real lack of statements and explanations. No doubt one of the reasons for this is that the political agenda in Turkey changes with such speed and intensity that it simply doesn’t allow for deep analyses or examinations of the conceptual dimensions of much anything. In addition, the truth is that the very same intelligentsia who should normally be debating the topics, concepts, and methods at hand wind up using more journalistic approach to talk about and deal with these fast-unfolding and intense events.

It should be pointed out that the term “journalistic approach” is not meant to be a pejorative. But the simple truth is, not all topics should be treated simply as “news.” Just as important as these factors is that some factions seem to be pursuing a way to influence wide factions of society using propaganda, rather than trying to illuminate the truth. The fact that those who actually possess an academic kind of discipline in their thinking are not playing enough of a role right now is also a problem or a deficiency. This entire chain of deficiencies has caused not only misinformation being given to the public, but also excessive importance being placed on de facto statements, which then leads to debates and false directions.

The accusations made against the Hizmet movement by both the ruling party and certain societal factions, who are chronically judgmental, are made possible by the fact that certain reference-less and baseless rhetoric takes on the appearance of being true.

Along these lines, the creator of the concept of a “parallel state” is American political scientist and historian Robert Paxton. Paxton, who still works as an emeritus professor in connection with the history department at Columbia University, used this concept for the first time ever when he was doing his research on Nazi Germany for this doctoral thesis. But it was with the publishing of Paxton’s 2004 book “The Anatomy of Fascism” that this concept gained fame and global recognition. In this work, Paxton explains the political and psychological methods used by fascist regimes in Italy and Germany, giving examples that show how the incorporation of a fascist regime takes place in five different stages.

According to Paxton’s work, a fascist order first and foremost begins organizing in the arena of politics, and later tries to increase its influence and power step by step in the political arena, as quickly as possible. Later, the supporters of this fascist leadership style take over the leadership offices through the help of a political elite that has been trained and prepared within their own ranks. The fourth step herein is that the ruling party and all its mechanisms are turned into vehicles for spreading these ways of thinking. In this way, some of the tools used to implement democracy –such as elections, referendums, legal debate arenas, and even parliaments — are turned into basic tools meant to serve the goals of the ruling party. What happens in the long run then is that the regime — along with its foreign policy approach, its needs and its economic structure — winds up being altered according to a fascistic worldview.

There can be little question that the first four of these steps occur in a basically invisible way.

According to Paxton, the formation of a parallel state would actually begin to take on weight during the second stage of the above-summarized stages. Within the various departments of the state, the foundations are laid for the coming changes, although in a way that is not directly felt, as this all unfolds in the eyes of the legislative wing of the government. During this process, media outlets (which represent one of the most important duty arenas of the state) get to work preparing the way for changes set to take place in public perception in later stages.

At this stage, some of the “soft” transition maneuvers aimed at bringing legitimacy to the parallel state leadership are put into implementation. The parallel state, coordinated directly by the executive branch of the government, is defined by a leading name when it comes to structuralist thought, Louis Althusser, as being under the control of the state’s ideological networks. In the meantime, education policies, armed forces, police, media and other institutions are all re-shaped by the parallel state, which manages to give off the impression that it is not intervening. In order that all these oppressive policies on the part of the executive branch be carried out more easily, these processes are carried out under the supervision and with the complete knowledge of said executive branch.

In his work, Paxton talks about two important characteristics of the parallel state. The first is the civil organization that is formed in a separate structural sense from the official state. Despite this, this civil organization is directly created by the executive branch and cannot in any way be separated from it. In this sense, its arena of influence shrinks and grows in accordance with that of the executive branch. It should be added that other structures are created as the result of personal interventions. These are structures that have been seen often throughout the 20th century, especially in Italy, Germany, and Spain; they bear the important characteristic of being state-supported. Thus, the executive branch of the government meets the parallel state’s human resources and financial needs. What’s more, any legal problems that these structures face are generally made easier to deal with by virtue of legal reconfigurations carried out by the executive administration. If one had to summarize it briefly, one could say that the parallel state is in fact the invisible operational arm of the executive part of the government.

And now, to return to the debates unfolding in Turkey in light of the above summation, the government’s accusations that the Hizmet movement is in fact a parallel state are irrational on five main points. First, as I have already touched upon, a parallel state and the executive branch of an administration need to possess the same system of thought and the same worldview as one another. But keep in mind that, from the very start, the members of the Justice and Development Party (AK Party) and the Hizmet movement possessed extremely differing thoughts and mindsets when it came to the European Union, foreign policy and the Kurdish issues. In addition to this, it is very clear that the AK Party and the Hizmet movement possess completely different historical roots, different traditions and are nourished by very different socialization practices.

Second, in order to speak of state structure, one would have to be able to say that it was being supported by the executive branch in terms of material goods as well as financially. In the meantime, it has been determined by many academic studies that the Hizmet movement is supported by the voluntary efforts of civilians throughout the world. In addition to this, it ought to be noted that the activities of the Hizmet movement are around four times the legal age of the current administration of Turkey, which means that to allege that the Hizmet movement is in some sort of financial relation with the administration, or that they were “discovered” by the administration, is simply mistaken. According to what Paxton says, a parallel state and a political leadership should move within the same ideological plane.

But to the contrary of this, to define the people who give their time and efforts to the  Hizmet movement as belonging to some sort of shared ideology actually runs counter to the wide spectrum and basic philosophy of this movement. The final irrational point herein is that the parallel state, according to Paxton, becomes a tool by which the executive branch imposes its ideas and goals onto society. Today in Turkey, we see that the ruling party has enfolded the media, civil society organizations, professional groups, and other organizations into its own arena of power, turning them into vehicles for its own policies. So if the Hizmet movement were really a parallel state, these groups would have to be directly tied to the movement.

The members of the Hizmet movement make it clear through statements about their devotion to a free and dependable democracy the value they place in the supremacy of law. Contrary to this though, the ruling party — including the prime minister — have made it clear through law-making processes or other actions just how much they have begun to use law and democracy as vehicles for their own goals.

Finally, recent months in Turkey have seen some extremely wrong normative and procedural practices take place. One way to straighten out some of these mistakes is through the correct use of language, which is of course a political tool. When political actors intentionally use this tool to implement their goals and populist practices — in this modern world where concepts are so deeply important — it creates ethical problems, incorrect information and almost impossible to fix problems for the more and more ordinary Turkish academy. What is necessary is to approach the events of the day in a more rational and calmer manner.