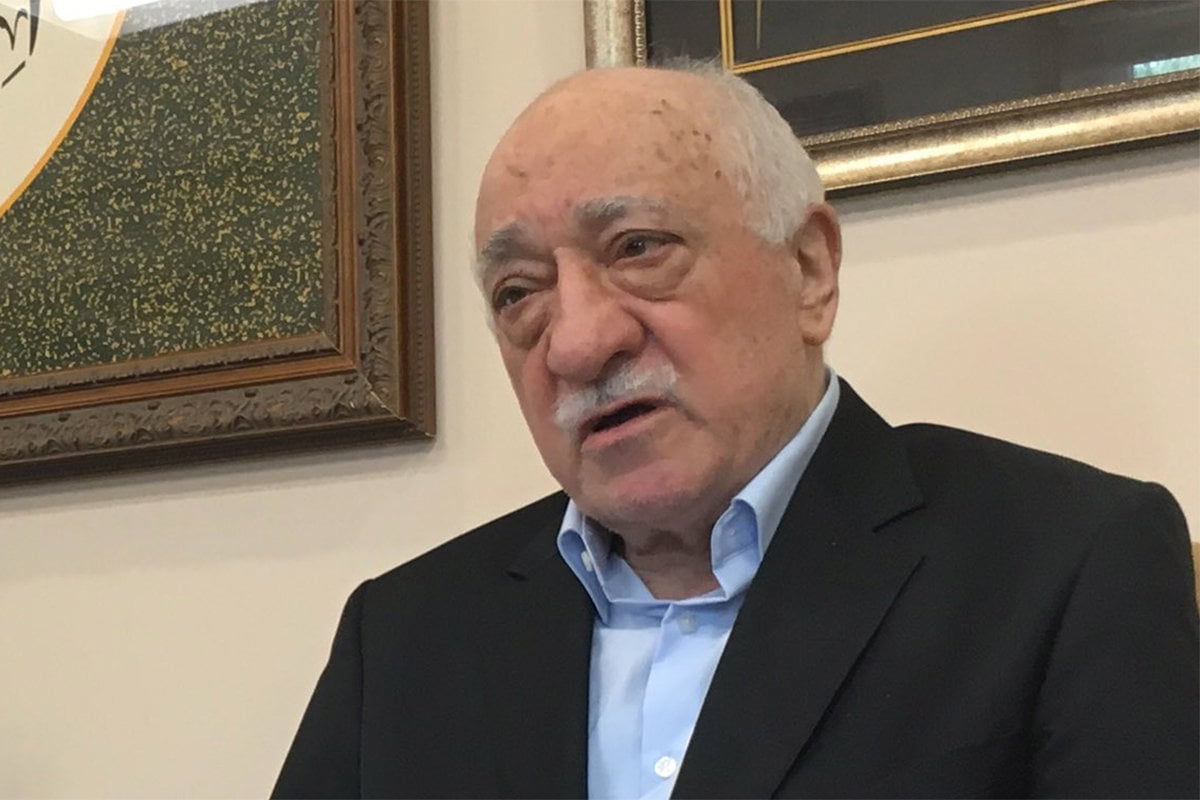 Fethullah Gulen, cleric that Turkey blames for the coup, says Sunday that he is not worried at prospect that U.S. will send him back JEREMY ROEBUCK / STAFF

Could an old man in Pennsylvania really be responsible for an attempted coup that nearly unseated a NATO ally and threatens America’s fight against ISIS?

Thanks to the Gulen uproar, Turkish media are filled with anti-American conspiracy theories charging Washington with endorsing the plot – a charge even some of Erdogan’s cabinet ministers are making.

At a time when the administration needs the help of its NATO ally to crush ISIS, the extradition flap could poison U.S.-Turkish relations. The flap already called into question, briefly, whether U.S. planes would still be allowed to fly out of Incirlik air base to strike ISIS targets in Syria.

But Secretary of State John Kerry is absolutely correct to resist Turkish demands to turn Gulen over. Kerry’s message to Turkey Sunday on CNN was: “Show us the evidence – not allegations, but evidence. We need a solid legal foundation for extradition.” The big question is whether Erdogan’s government can produce such evidence against Gulen – or if they even want to – and what will happen to U.S.-Turkish relations if they don’t.

Indeed, some observers believe that it is far more convenient for Erdogan to let Gulen stay on as the bogeyman in Pennsylvania whom he can blame for Turkey’s continuing problems.

The cleric is a mysterious and controversial character but hardly seems threatening, at least on the surface. From his spare study, he posts website sermons promoting a modern form of Islam that stresses education, free markets, and democratic elections.

His foundations promote warm relations with other religions. His followers have run a network of industries, media companies, and college-tutoring schools in Turkey as well as a global network of 2,000 schools, including about 120 U.S. charter schools.

However, the FBI and Departments of Labor and Education have launched investigations as to whether some of the U.S. charter school teachers were kicking back part of their salaries to fund his activities.

Meanwhile, in Turkey, tapes leaked in 1999 famously show Gulen urging his followers to infiltrate government institutions, and numerous Gulenists took jobs over the decades in Turkey’s police and judiciary.

Yet – and here comes the really interesting part – Gulen and Erdogan were de facto allies for years in a mutual effort to weaken the Turkish army and introduce a more religious climate into officially secular Turkey.

Their cooperation was at its best – and worst – when Gulenists in the press and judiciary, along with the Erdogan government, conducted two bizarre show trials over five years that rounded up hundreds of military officers, intellectuals, university presidents, women’s rights advocates, and writers.

These unfortunate targets were accused of plotting to overthrow Erdogan’s government in 2002 and of a conspiracy against a previous government. Higher courts ultimately found that the alleged plots – known as Ergenekon and Sledgehammer – were faked, but only after many of the falsely accused had languished in prison for years.

Relations between the two allies gradually soured and broke in 2013 when Turkish prosecutors – allegedly Gulenists – brought corruption charges against allies of Erdogan, including his son.

“Erdogan turned the tables on Gulen after the corruption allegations,” said the Woodrow Wilson Center’s Henri Barkey. The Turkish leader purged hundreds, if not thousands, of supposed Gulenists from the police and judicial system and closed many Gulen schools in Turkey.

That’s when Erdogan began denouncing “the man from Pennsylvania” and calling for Washington to extradite him – but Ankara never submitted an extradition request. Perhaps the Turkish leader was worried that the cleric knew too many secrets about Erdogan’s modus operandi and might reveal them during a trial.

Fast-forward to the present. Is it possible that Gulen was the puppeteer who organized a complex but clumsily conducted coup from afar?

Many experts doubt that Gulenists could have had so much success in penetrating the professional and still mostly secular army. “The idea that there are so many Gulenist generals is absurd,” said Turkey expert Barkey, speaking by phone from Istanbul, where 103 generals and admirals have been arrested. (Six thousand military personnel have also been arrested, and thousands more police, civil servants, and judges detained or suspended).

“My opinion is, it seems a little fishy,” I was told by Joshua Hendrick, the author ofGulen: The Ambiguous Politics of Market Islam in Turkey and the World.

Hendrick said Gulen’s followers have no history of participating in organized violence, and their rhetoric has been anti-coup and pro-elections for decades. Whatever their grievances with Erdogan, backing a military coup that was so “antithetical to who they say they are” would undermine the “moderate” image that Gulen had labored to create over many decades. It would undermine the Gulenists’ interests around the world, including in the United States.

Bottom line, it is up to Ankara to provide clear evidence of Gulen’s role, to show that Gulen is not just a convenient cover to justify a purge of thousands of possible enemies unconnected to the plot. If Gulen was the coup’s brains, prove it.

Helen Rose Ebaugh, an American professor specializing in the sociology of religion, sees the movement founded by the controversial Turkish preacher Fethullah Gülen as both an opportunity for the West and a serious alternative to religious extremism.