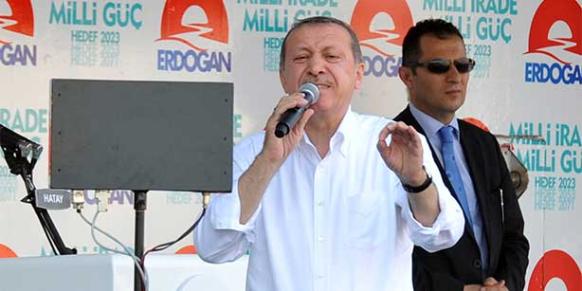 Super judges, or penal judges of peace, refer to judges who have been granted many powers through a recently approved omnibus law introduced by the Justice and Development Party (AK Party). These judges are criticized for being endowed with broad powers over investigations and other courts’ rulings.

While speaking to a group of journalists on board a plane from Ordu to Ankara on Sunday evening, Prime Minister Recep Tayyip Erdoğan was asked if the new structure of the Supreme Board of Judges and Prosecutors (HSYK) will impact an ongoing struggle of the government against Hizmet. In response, the prime minister said, “HSYK’s powers are restricted. A legal process [against Hizmet] is about to begin soon. The process will be handled by penal judges of peace. All evidence collected so far has proven that the parallel structure is a fact, not a rumor.”

The prime minister has been harshly criticized for his remarks by observers and legal experts, who agree the remarks have come as a clear indication that the prime minister is directly involved in a planned legal action against a civil society group — the Hizmet movement. According to the prime minister’s plans against Hizmet, it is already clear which court and judges will handle the legal case against the movement, who the suspects to stand trial in the case are, and what these suspects will be accused of — a process which is diametrically opposed to the principles of law.

Former Justice Minister Hikmet Sami Türk, a law professor, has criticized the government’s move which does away with penal courts of peace while creating an all-powerful penal judge of peace, saying, “The judicial system that the government is trying to establish is unconstitutional and against the basic principles of law.”

“The penal judges of peace will handle offenses linked to the ‘parallel structure’ and no other authority will able to be appeal except another penal judge of peace to object its rulings. This is also against the principle of the state of law,” he added.

It is the First Chamber of the Supreme Board of Judges and Prosecutors (HSYK), the composition of which was redesigned by the government following the Dec. 17 corruption investigation, which will make the appointments to these super-powerful new posts.

A single judge who serves in the post of the penal judges of peace will be authorized in all matters related to issues such as issuing warrants for the searching of a house, taking someone into custody as well as appeals to judges’ decisions concerning these issues.

Osman Kaşıkçı, the dean of Fatih University’s faculty of law, also believes the government’s step represents a violation of the rule of law, international conventions as well as of fundamental human rights. “What the government has done concerning this issue is against international conventions. You cannot endow a judge with such broad authority. It is reminiscent of the independence tribunals, here in 2014 [set up in the 1920s to hear those who are against the establishment of the Turkish Republic],” he has told Today’s Zaman.

Previously, appeals to the decision of a judge on such issues were brought before a team of judges and a majority vote was needed for a ruling of the court. But in the current system a decision given by a single judge will be sufficient.

Given the extraordinary authority granted to this new class of judges, it has raised questions that the position could be manipulated and potentially be designed to serve and protect the interests of the government, which has been fighting a corruption and bribery scandal since Dec. 17 of last year.

Retired military judge Ümit Kardaş, in remarks for Today’s Zaman, said that authorizing certain judges in all matters is problematic, something which is against the principles of law. “The independence and objectivity of judges is directly related to the [independent] structure of the HSYK. But if the government — or the justice minister — has a say in the appointment of penal judges of peace, then the government or the minister will directly have a role in decisions to be made by those judges,” he stated.

Kardaş also said that the government may use super judges to punish all its critics. “We may be faced with major problems related to personal rights and freedoms. The government’s right to have a say in the appointment of [super] judges is a big problem on its own,” he added.

The Hizmet movement promotes interfaith dialogue and the resolution of problems through peaceful means throughout the world. However, Prime Minister Erdoğan’s AK Party has recently been engaged in a bitter struggle against the movement. This conflict intensified after Dec. 17, 2013, when a major government graft operation became public. The prime minister claims the operation was orchestrated by the Hizmet movement, which intended to overthrow his government. However, he has not provided any evidence to prove his claim. The movement denies the accusation.

Günal Kurşun, a professor of penal law at Çukurova University, strongly believes the Constitutional Court will annul the move because it is unconstitutional. “This is an action which you would not [normally] encounter in a state of law. It is a great mistake to abolish the penal court of peace,” he told Today’s Zaman.

The HSYK has already appointed over 110 penal judges of peace across Turkey and six of them will serve in İstanbul.

Among these judges are those who made a number of controversial decisions in the aftermath of the Dec. 17 corruption and bribery operation as part of which over 50 people, including the sons of some then-Cabinet ministers, businessmen and bureaucrats, were detained.

Journalist and writer Taha Akyol lashed out at the controversial appointments in a column he wrote for the Hürriyet daily on July 19. He sarcastically exclaimed that the members of HSYK have picked pro-freedom super judges as a result of meticulous work. “Congratulations! Here is an independent and objective judiciary for us all!” he said.

According to retired public prosecutor of the Supreme Court of Appeals Ahmet Gündel, the Penal Judgeship of Peace may produce good results for the justice system provided that it is used properly. “But it may produce bad results if not used properly,” he cautioned. When asked to comment on Prime Minister Erdoğan’s remarks on a witch hunt against Hizmet, Gündel said he does not find the remarks appropriate for a politician. “The judiciary is not a power that can be used against certain groups of people. Those who misuse the judiciary will be called to account sooner or later,” he added.

Since Dec. 17 more than 40,000 police officers, bureaucrats, judges and prosecutors have been reassigned for no official reason other than their suspected links to the Hizmet movement. Critics have described the arbitrary reassignments as a “witch hunt.”

In a public address in May, the prime minister effectively confessed that he was carrying out a witch hunt. Commenting on the reassignments, the prime minister — without providing the slightest shred of evidence — accused the reassigned officers of “betraying Turkey” because of their suspected alliances with the Hizmet movement, which he currently views as, “… enemy number one. If reassigning individuals who betray this country is called a witch hunt, then, yes, we will carry out a witch hunt,” Erdoğan said.

According to lawyer Orhan Kemal Cengiz, a veteran in human rights cases, the move represents a totalitarian siege on individuals’ rights and freedoms, while bestowing on a single person a tremendous amount of power.

“The individual is being weakened in every way [by legislation recently passed by the government], while the state is being reinforced without accountability. This is what I call a totalitarian siege,” Cengiz has told Today’s Zaman.

For some, the establishment of the Penal Judgeship of Peace by the government is a maneuver to facilitate an escape from the major corruption investigation of Dec. 17, 2013, which has implicated Prime Minister Erdoğan, members of his family, close associates, and four former cabinet ministers.

According to terrorism expert Emre Uslu, who is also a columnist and writer, the prime minister’s remarks suggest that the Penal Judgeship of Peace has been established with a sole motive — to deal with a legal case against Hizmet. “Erdoğan’s remarks have cast doubt on the [impartiality of the] penal judges of peace,” he stated.

Faruk Bal, a deputy of the Nationalist Movement Party (MHP), said the AK Party is stuck in corruption and, thus, it is employing every means at its disposal to save itself. “The AK Party is aware that it cannot control the operations to be carried out by the police in such fields as corruption, money laundering and bribery. For this reason, it seeks to place judges under control in an attempt to have a say in who will be detained or arrested by those judges. The penal judges of peace are few in number because the AK Party wants them to be so in order to easily monitor their activities,” he noted.