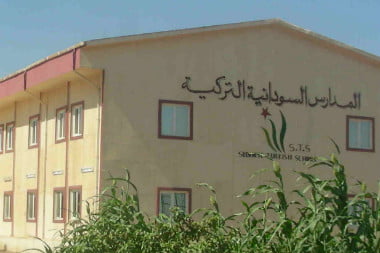 Turkish aid organization Kimse Yok Mu (Is Anybody There) has laid the foundation for the Kimse Yok Mu Education and Culture Complex, which contains four schools, to be built in South Darfur, Sudan.

Speaking at the ceremony, Governor Kasha described the project as a great step in the relationship between the two nations. “This is a model project. We have laid the foundation for the culture complex and model school project. Moreover, Turkey will construct a $50 million-dollar hospital here. Kimse Yok Mu conducted more than 7,000 cataract surgeries in Darfur. They opened water wells. They are building an educational complex and establishing the Orhaniye Town. These projects, aiming at Darfur’s security and stability, are very important social projects. We are indebted to Turkey for these,” he said.

Ambassador Küçük highlighted the fact that the schools were a symbol of friendship and solidarity between Sudan and Turkey. He said that these schools would be places of love and dialogue as they were in other parts of the world.

People can contribute to the Kimse Yok Mu cataract campaign through donations of TL 5 through by sending a text message to 5777. Further information is available through the organization’s website at www.kimseyokmu.org.tr and their hotline, 44 44 593. The cost of enabling one person to gain the gift of sight through the campaign is TL 150. The complex will be sponsored by the Tekmen Group. The Kimse Yok Mu Education and Culture Complex will encompass the Emine Anne Girls’ Primary School, Emine Anne Girls’ College, Emine Anne Boys’ Primary School and Emine Anne Boys’ College.

Leaving Turkey on April 19 with the aim of providing assistance to tens of thousands of refugees seeking sanctuary in Tunisia, teams from the charitable organization conducted investigations in Tunisia’s Djerba, Zarzis, Medenine and Tataouine and made contact with refugees and officials there. Kimse Yok Mu aid teams distributed one week’s worth of containers of foodstuffs to 6,400 refugees in Medenine and Tataouine. The Kimse Yok Mu team, including a group of four volunteer doctors, distributed medications to 180 patients after medical check-ups. Moreover, they provided medicine to meet the needs of 6,400 people for the next few months to Tunisian Red Crescent officials.

Stating that they investigated, on-site, the suffering of refugees fleeing Libya leaving behind all their belongings, Kimse Yok Mu Operations Chief Atıf Ulusoy indicated that at least two to three families share one house. “The scene we witnessed in Tunisia was really heart-wrenching. We saw tens of thousands of suffering refugees due to the climate of chaos and uncertainty experienced. Refugees are in extreme need of foodstuffs and medical aid in particular. The Tunisian people were of great help to us in our aid operation and greeted us very warmly. They love the Turkish people. Furthermore, they expressed their indebtedness to the people of Anatolia for their efforts,” he said.

Indicating that Ras Jedir in northern Tunisia and the mountains were refugee crossing points, Ulusoy said 12,000 refugees lived in Ras Jedir and that close to 25,000 refugees were in dire circumstances in the regions surrounding of Tataouine and Rama. While also stating that they met with officials from the United Nations, Red Cross and international health organizations, Ulusoy said they undertook their aid efforts without facing any problems and that the Libyan people were going through very difficult days and were deprived of basic commodities.