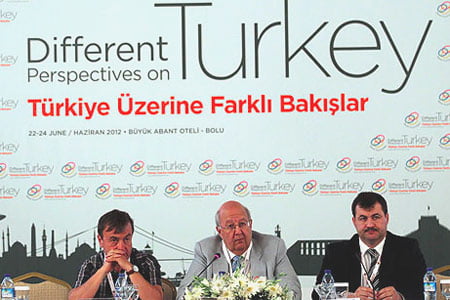 The 27th Abant Platform, titled ‘Different Perspectives on Turkey,' kicked off on Friday with the attendance of local and foreign journalists. (Photo: Today's Zaman)

Even though Turkey has achieved great economic development in the past 10 years, it is still having trouble consolidating its democracy, according to both native and non-native participants of the 27th Abant Platform.

In his introductory speech, Sabancı University’s Ersin Kalaycıoğlu said on Friday at the 27th Abant meeting, titled “Different Perspectives on Turkey” and held on June 22-24 in the Turkish province of Bolu, that one definition of democracy is competitive free and fair elections between different political parties observing the rule of law. “In Turkey, the masses like to elect who runs the government. This is an established rule. But we need to ask: Is Turkey acting democratically between elections?” he asked.

Richard Peres of Şehir University said it is generally easy for somebody coming from another country to make these observations and comments. He emphasized that the government needs to work with people, experts and civil society organizations in decision-making.

“The lack of listening to the voice of people amazes me in Turkey,” he said.

Another participant, Vangelis Kechriotis of Boğaziçi University, said he was struck by the fact that one of his university students was put in jail on the basis that she was contributing to the propaganda of a terrorist organization, stating that this was based on her phone conversation with someone who offered her a position with a publication, which she declined.

“She stayed in jail for five months for that. There are also students convicted to eight years’ prison sentence for asking for free education,” he said, adding that those developments are worrying for him. Dianne Sunar of Bilgi University said she has been living in Turkey for almost 40 years and observed that there is a great deal of devotion to leaders, as hierarchy is quite important for the society.

“This is part of the Turkish culture. Equal relations are not emphasized,” she said.

Regarding Turkish cultural codes of behavior, Jenny White of Boston University added that there are such aspects of Turkish culture as masculinity, nationalism and violence.

“Another aspect of Turkish culture is the in-group and out-group ethos. If you are not in the group, you are considered an enemy,” she said, adding that school textbooks also emphasize “the enemy.” In addition, participants dealt with the issue of majority rule, which they have found is becoming prominent.

“Whoever gets the majority vote might impose rules,” said William H. Knapp of Şehir University.

He also asked, “Where do we learn how to respect one another?” In this regards, Peres said that majoritarianism is not democracy and that he is worried that there is no talk of freedom of speech and religion in the ongoing debate with respect to making a new constitution in the country.

Another issue debated in the morning session was how to overcome difficulties in the Turkish democracy. Kalaycıoğlu said that the Turkish Penal Code (TCK) is not so different from the European code but that there is a difference in practice, legally speaking. “The interpretation of laws is curiously different in Turkey. Do we have an educational problem in law schools? Do we need reform on how they teach the penal code at universities?” he asked.

Today’s Zaman Editor-in-Chief Bülent Keneş said it is not right to suggest that Turkey has been truly democratic because democracy seemed to have been in place in one period of time but not in place for another period of time.

He also said that it is important to have governments be elected democratically, but they should also learn how to leave democratically alone and not change the rules of the game arbitrarily to stay in power. In that regard, White also said that the blame does not belong to only governments, saying that other elements in the society support intolerance.

“Yes, there are serious problems related to freedom of the press in Turkey, but the press has a record of blacklisting people,” she said.

According to Kalaycıoğlu, there is stability but not democracy in Turkey. “Businesspeople emphasize stability, not freedom. They would rather have an authoritarian government than a coalition government. However, the goal of democracy is freedom, not effectiveness. Who speaks the language of freedom in Turkey? Nobody,” he said.

The five sessions at the Abant meeting — democratization; foreign policy and the Middle East; EU accession; economic development; and the media — are designed to allow for open discussions, not expert panels, among participants about the issues at the top of Turkey’s agenda.

The participants raised concerns regarding current debates, including the implications by government officials in regards to bringing restrictions on abortion, which has been legal in Turkey since 1983. Another issue taken up at the meeting has been the detention of people in relation to spreading terrorist propaganda. The participants also debated women’s place in Turkish society, where patriarchal attitudes have been dominant.

Since the Abant Platform’s first meeting in 1998, the organizers, the Journalists and Writers Foundation (GYV), have tried to bring together people from different cultures, ideologies and religions to find common solutions to common problems.