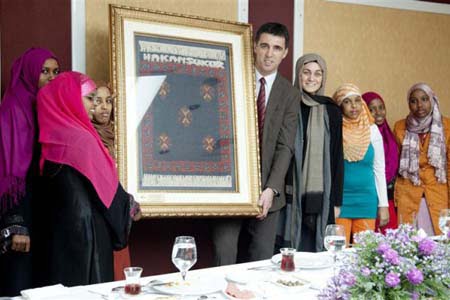 I try as much as possible to read the hundreds of e-mails I receive every day. Among the hundreds comes an array of information, documents, news or photos, ranging from those that come “out of the blue” to the ones that make me say “Wow, how could we forget things so fast!” Some, on the other hand, don’t even appeal to me due to either my occupation or different area of interest.

One of the e-mails I received last week got my attention with its content and images attached. The text and the images were so warm and friendly.

The reporting message titled “African violets of Hakan Sukur” was starting with an important introduction recalling the past:

The Somalian mothers, fleeing the drought and civil war that hit the country in 2011 and having buried their children that fell dead on the way, were able to reach the aid camps in the capital Mogadishu. Yet, thousands of them couldn’t escape death.

While the heart-wrenching scenes still linger in minds, thousands of Africans held on to life thanks to a Kimse Yok Mu foundation initiative, “Humanity still exists” campaign that was aired live and contributed by the prime minister Recep Tayyip Erdogan too with an on-air phone call. With donations over 25 million Turkish lira, supporting projects followed the emergency aid to curb the humanitarian disaster spreading beyond Horn of Africa. Hospitals, schools and kitchen have been built. Kimse Yok Mu carpet weaving trainings projects have been successfully completed. Today, the perseverant young girls of the Dark Continent are weaving beautiful carpets and rug using techniques they’ve learnt from their instructor, Kadriye Selim from Izmir.

Those girls shouldering the exploited continent’s burden are feeding their families by selling their hand woven carpets featuring unique patterns and colors to touristic markets. An absolutely remarkable service and its valuable results… Africa needs no empty words but such fruitful projects and investments. Those involved deserve congratulations.

An African carpet for Hakan Sukur

The part of the message under the title above was about one of the few world-famous players of the Turkish soccer, Hakan Sukur. Hakan Sukur is noted for his humanity as much as his football. I would like to present the narration exactly as it is rather than interpreting it as it contains its own interpretation, anyway. Here is the story:

The African girls remembered the Turkish people who contributed to the campaign saving thousands of Africans from famine and the celebrities that led the campaign. The girls who wove one of the first carpets at their looms in Mogadishu for Istanbul deputy Hakan Sukur came to Istanbul to present this meaningful gift of recognition.

The girls presented this meticulously handmade gift at a breakfast by Hakan Sukur and his wife Beyda Sukur in Florya. They thanked the Sukur family for their contributions and said they have the family in their prayers wishing them a good life with their children. Moved by such a meaningful gift, Hakan Sukur sent his thanks to Kimse Yok Mu and Turkish people for extending bridges of love. He had lengthy conversations with the girls and asked about their country, families and education. The Sukur family promised the girls to have them in their house next time and treat them to their traditional dish ‘sangos’.

Source: [in Turkish] on SorgunPostasi, 27 April 2013. English translation is retrieved from HizmetMovement.Com

The Journalists and Writers Foundation (GYV) and Is Anybody There? Association (KYM) jointly organized the conference titled “International Conference on Philanthropy and Peacebuilding” between April 12-13, 2014, with participants from 19 countries including Russia, the UK, India, Nigeria and the Philippines.