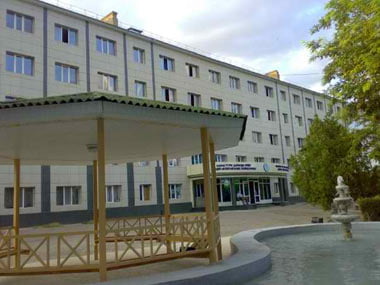 Pierre Montandon, the Honorary Professor of University of Geneva, is a retired ear, nose and throat doctor… I had met him nearly four years ago in Istanbul. He was then going to Mongolia to analyze Turkish high schools. Then, he also saw the schools in Kazakhstan, now he is trying to tell these observations and evaluations of him to a conference hall full of Swiss. Most of those who listen to him are retired professors like him, that is they are the elite of the country…

He explains what he has seen, what he has been through via slides very well. He expressed everything very clearly in half an hour.

He started his speech as follows: “Twenty years ago, a village boy who had had his PhD in Turkey (Prof. Dr. Serif Ali Tekalan) applied to our department to make studies. Then this friend of us got back to Turkey, became a professor and one day he invited me to Turkey and to see the Turkish high schools in Mongolia. I accepted his invitation; I have been there, now I will tell you these by means of photographs.”

On a map he projected on the wall, he showed the places he has been to, Mongolia, Almati, Astana. Then he showed a plane on a soil runway and his photo in front of it. “This is Bayanulge!” he said. With another photo, he explained the Mongolians welcoming him in their own Buddhist traditions.

Then he showed a building from the Soviet era and two Mongolian tents. When he said “One of the tents is the school principal’s room.” the audience started to chuckle, but they were surprised to see the modern computer network inside.

On another frame, there was a bazaar and three Mongolian students. “I wasn’t contented with what I saw at school. I started to walk in the bazaar. I met these young men. They were speaking English without accent. They had learnt to speak English in the Turkish high school. They wanted to get their higher education in Turkey or another Western country. They said they would get back to their country after having had a very good education.” he said.

On a photo frame, there is the Turkish school principal and the Mongolian deputy. “Teachers are very young…They give an attentive education. They are devoted people of high quality…They give instruction in English, Russian, Mongolian and Turkish. Turkish businessmen who support these schools are also very successful in their jobs. I have been to the graduation ceremony. The ceremonies, artistic shows and national dances were great. I saw there a Switzerland in the middle of a desert. I made a speech, too. I witnessed that teachers are on intimate terms with parents of the students. This is crucial in education. Parents and teachers should be in close relationship. The parents were very contented, they like the teachers very much. There is a good motivation. Students take part in world-wide olympiad competitions.” he said.

He later talked about his return to Istanbul, high schools he saw there…He also described workings of Surat Publications: “I saw a good effort of the same mentality. They are working like a factory.”

While he was telling about Fatih University, “a modern, clean and open-minded institution. I saw no rubbish thrown away.” he said. He stated that some try to misinform him about these schools by using words such as “radical and dangerous”, but that he replied “I try to understand these schools. They give an education of highest quality. I accept that there is a breeze of religion, too, but I approve this.” “These institutions are supported by businessmen and foundations.”

Then he said “I also met with Fethullah Gulen who openly told everybody about this idea of education. He is a person of tolerance. He met with the Pope. He proposes to accept everyone as he is. I talked about everything with him. He has a respectable character. He has knowledge in all areas.”

After telling about Mongolia and Turkey, he said that he went to Kazakhstan last year: “Conditions in Kazakhstan are different from those in Mongolia. It has got petroleum and other minerals. It is rich and developing. The Soviet effect seems to have decreased. Astana is the capital. There are people very well-dressed. Almati is a big shopping center. It’s very modern. The President Nazarbaev is very careful and effective. Turkish highschools in this country function in the same way. They are better. Turkish teachers are gradually being replaced by Kazakh ones. I participated in their graduation ceremony, it was great. Artistic groups and bands of music were really nice. He showed a picture and said “We met with the Minister of Education. Mrs. Shamsa, as a minister, had put a Kazakh flag at one side of her table and a Turkish flag at the other side. This nice lady highly approves of these schools and teachers.”

On another frame, he showed the house of a Kazakh student where he had been invited to and the meals they ate.

In the last part of his speech he said as follows:

“As a result, a very good education is given. This is an objective, dynamic and democratic working in cultural terms. This professionalism originates from Turkey’s historical and cultural heritage.”

Later there was a break of fifteen minutes, and then it was the second speaker’s turn. After the speech of the editor of the magazine Time, Harry Muller, questions were asked to both speakers.

A conference titled “Ideal Human & Ideal Society in the Thoughts of M. Fethullah Gülen,” seeking to extensively discuss the various dimensions of the Turkish Islamic scholar’s perspectives over an ideal society in a tumultuous time, will kick off on Tuesday in Lahore, Pakistan. In a press conference held at the University of the Punjab […]