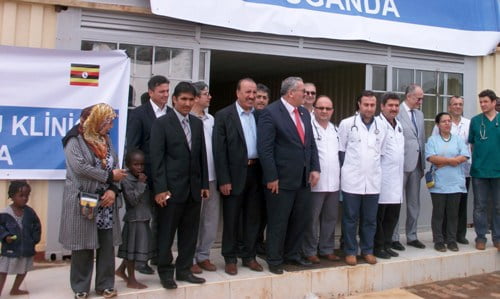 Doctors who decided to volunteer at the Nile Hospital, established by Turkish charity organization Kimse Yok Mu and set to open in Uganda in few days, have left Turkey on their way to their new posts.

The Adana branch of the Association of Health Employees (SAMEDER) held a farewell ceremony in honor of the volunteer doctors on Wednesday. Dentist Yasin Türkoğlu, who addressed the attendees of the event, said that that Dr. Necdet Kızılkaya from Adana was the first to decide to volunteer in Uganda.

The Nile Hospital will be opened very soon, Türkoğlu said, adding that the second doctor to commit to serving Ugandan patients was Sami Kiper.

“I am congratulating our colleagues, who are giving their profession its due. The prayers of our nation are with you,” Türkoğlu said, adding that Kiper will be helping the people of Uganda.

SAMEDER chairman Önder Önem said each doctor would pursue their vocation with a sense of honor. “It is good to see that our doctors under the auspices of SAMEDER and Kimse Yok Mu are continuing to take on the tasks that befit the profession of medicine. We are happy and honored to see these people,” Önem said.

Scores of doctors attended the farewell ceremony to give Kiper and Kızılkaya a proper sendoff. In a speech at the event, Kiper talked about the serious health problems Ugandans are facing, saying, “We will be trying together with my Turkish and Ugandan colleagues to help the people by providing remedies for them. During this term, our families will also be supporting us. We are also grateful to them.”

The doctors have taken their families to the Ugandan town of Jinja, which the Nile Hospital will serve.