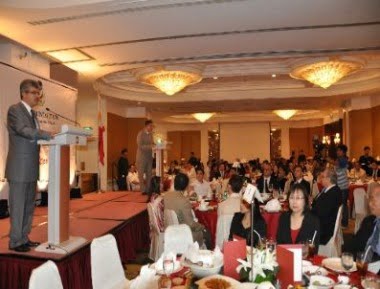 International Fountain Schools and Pacific Dialogue Platform together in Manila, Philippines, organized a “Friendship and Iftar Dinner”. Officials, businessmen, politicians, board members from the country’s top universities, congressmen, high-level government and army officials, and journalists attended this pleasant event. The Pacific Dialogue Platform had their official opening at the dinner with nearly 250 guests. Dr. Şerif Ali Tekalan, President of Fatih University in Turkey, was also in attendance.

There was a display of hand made crafts. Ceramics, copperware, hand made crafts, and Kütahya chinaware that reflect Turkish culture were displayed to the guests. Guests were bewildered at the variety one culture could pertain. At the opening of the program, a professional calligraphy artist from Turkey amazed the audience as he wrote the names of Filipino guests.

During the iftar dinner, the audience enjoyed the Whirling Dervishes that came all the way from Turkey especially for this event. Philippino-Turkish Schools students sang a folk song called “Gurbet Kuşları” which brought an emotional ambiance to the program.

Ferhat Kazkondu, the president of Pacific Dialogue Platform, gave a warm speech of how great it is to see all colors of diversity at the Friendship and Iftar Dinner. Kazkondu expressed how proud and honored he was to have the opening of Pacific Dialogue Platform in such a welcoming environment. He made an announcement that the Dialogue Platform will organize seminars, conferences, out-of-state and in-state educational and cultural field trips. Kazkondu expressed a clear goal that these seminars and continuous activities would be the start of developing and improving dialogue starting among family members, then amongst neighbors, and finally reaching public and private sectors and other groups.

Iftar Dinner at the Philippine Parliament Next Year

Malik Gencer, Philippino-Turkish Schools’ general director, notified the audience that the iftar program for next year shall be held in the Parliament. Gencer said, “The high level of kindness and participation of the Filipinos made the opening and the iftar dinner splendid. These dialogue meetings shall be held throughout the year. We want to show the Anatolian hospitality to the friends we meet and keep in touch with them through organization of periodical Turkey trips. This is how our friendship will strengthen.

After the event, Prof. Dr. Şerif Ali Tekalan, President of Fatih University,spoke about the importance of the opening of the Dialogue Platform. Tekalan told the Cihan News Agency: “The opening of Pacific Dialogue Platform holds a separate meaning. Dialogue is a necessity in a world where everyone can talk and interact with each other. There was the perfect dialogue environment tonight at this iftar dinner. It was all because people from different cultures from different races were brought together. We need to have universal dialogue. I believe that dialogue is going to benefit all people in the future. We must put in more effort for such dialogue centers.”

Senator Alan Peter S. Cayetano thanked the organizers of this event through Cihan News: “This dinner is an actual universal dinner where not only members of different religions and cultures but also people like senators, representative scholars came together. I believe that programs like this are what help us understand each other better.”

Source: http://www.beyazgazete.com/haber/2011/08/21/filipinler-de-pasifik-diyalog-platformu-ndan-iftarli-acilis.html (Original news is in Turkish. PII volunteers translated it to English)

The President Remengesau expressed his pleasure to receive the delegation and delivered a presentation on the Republic of Palau and its people. He further accentuated the significant role that intercultural activities will play in boosting Turkish-Palauan bilateral relations. He also expressed his willingness to have Palauan student participate in the coming Turkish Language Olympics.

“There are problems everywhere in the world,” he continued, “but we are the ones responsible for fixing those problems. We can’t tell one person or group to ‘fix it.’ We have to work together to fix the world and make it a better place.”