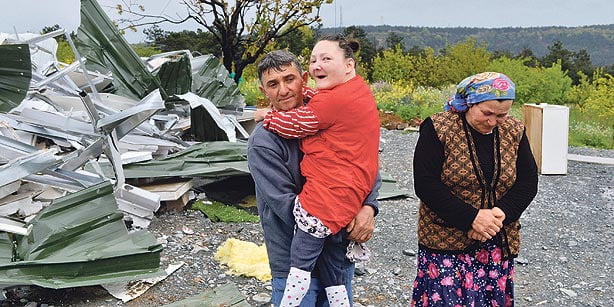 The incident came amid mounting signs of a possible government crackdown on the faith-based Hizmet movement inspired by Islamic scholar Fethullah Gülen after Prime Minister Recep Tayyip Erdoğan vowed to root out the “parallel structure” from state institutions. Erdoğan lays the blame for the Dec. 17 corruption probe that implicated some of his close associates and his own family on Hizmet, a claim firmly rejected by the movement.

Accompanied by municipal police, a group of 50-60 workers — including laborers and engineers from the Boğaziçi Zoning Directorate of the İstanbul Metropolitan Municipality — visited the empty land where a prefabricated shelter had been installed for a guard and his family to safeguard the area.

“We will settle accounts with ‘parallellists,’ we will destroy their buildings,” the police said, according to witnesses and the guard. Without offering any legitimate explanation, municipal officials decided to demolish the shelter, and construction equipment was used to destroy it. Mehtap Education Foundation head Mustafa Başaran told Today’s Zaman that he had asked municipal police for an official document that approves the demolition.

“Instead of showing any official document approving the demolition, they just threatened me. They told me to refer my complaint to another authority, whichever I prefer,” said Başaran, who appeared stunned and bewildered by inexplicable behavior of the municipal officials from the ruling Justice and Development Party (AK Party).

“To demolish a building, there must be an official decision, and the foundation should have been informed by the authorities before they carried out the demolition, according to the procedure. This was not the case here,” Başaran said.

He said that the foundation would file a complaint against the municipal officials.

After opening the first Turkish school, Bedir Academy, in Mogadishu, Somalia, Turkish entrepreneurs are this time opening an educational complex with a capacity of 700 students on the campus of the old Technical University. The complex will have a school building, a dormitory, faculty housing, guesthouses, and a theater. When it is completed, it will […]