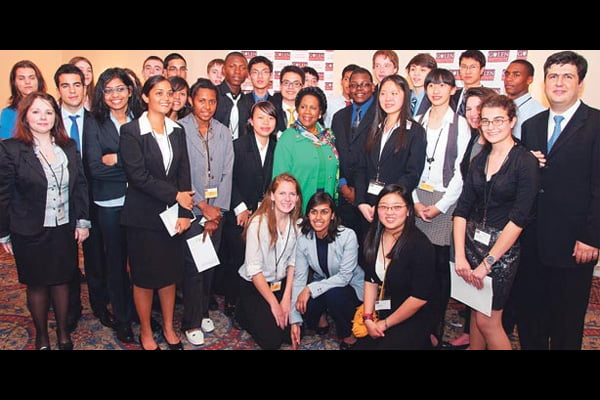 Students who won awards in an essay writing contest organized by the Gülen Institute and the Rumi Forum pose for a group photo in Washington on Wednesday.

Winning students participating in the Gülen Institute’s Dialog of Civilizations Youth Platform 2011 who competed against students from over 50 nations and 35 American states in essay writing received awards in Washington on Wednesday from U.S. Congressmen.

Congressmen presented the 36 awards to winners in Washington, D.C., with Congressional Certificates to recognize their success in the international high school essay contest that was organized by the Gülen Institute and the Rumi Forum. The contest involved 600 high school students, enrolled in ninth through 12th grades, attending public or private schools from the United States and abroad, writing on the use of military means as a solution to today’s international and national political issues.

Congresswoman Lee noted that the Gülen Institute reinforces how diplomacy and democracy can be used around the world. She also criticized Reverend Terry Jones, whose church burnt the Qur’an, calling on Muslims to condemn all kinds of violent responses to such acts. “I cannot let Terry Jones go unspoken to. I don’t want to give him publicity, but there must be a sense that this is not all of America. This is what the institute, I believe, does for all of you. I’m particularly grateful that you are in this place during these historic two days and that you gathered around essays dealing with the dialogue of civilizations, giving direction to what should be our next step,” she said.

Addressing winning students, Congressmen Poe from Texas referred to the important role that they would play in their future world and spoke of the value of public service. “No matter where you’re from in the world, you consider public service. Public service is a noble career. We are facing a lot of issues in this world. And those issues will be solved by, probably, people in this room and people of your age,” he said.

First place in the essay contest was awarded $4,000, second place $2,500, third place $1,000 and students who achieved fourth to 20th places received $300. In addition, all participating students were awarded a four-day tip to Washington, D.C., during which they will have the opportunity to meet members of Congress, participate in round table discussions and visit think tanks and tourist attractions.

In writing their essays, students were required to provide recommendations for national leaders that would prevent conflict and enhance the democratization process in their countries based on a case study from a country that has experienced a military intervention in its recent history.

One of the award-winning students was Muhammad Haroon Kohgadai from the Afghan-Turk Boys High School in Kabul. Kohgadai was unable to attend the ceremony because he was diagnosed with heart disease at the last minute. His teacher, Ahmet Fatih Baş, having travelled 40 hours, accepted the award on his behalf.

The Gülen Institute was established in October 2007 as a non-profit organization and a joint initiative of the University of Houston, the Graduate College of Social Work and the Institute of Interfaith Dialog. The Rumi Forum has been fostering interfaith and intercultural dialogue in Washington since 1999.