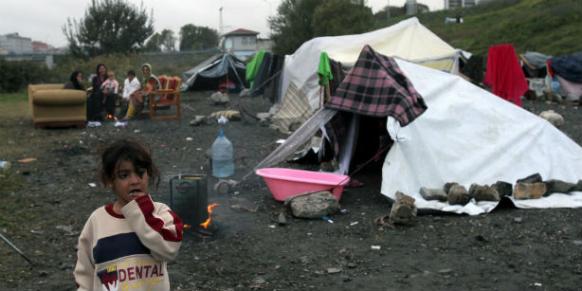 Many Syrian refugees who have taken shelter in Turkey, an ethnic Turkmen from Syria, want a house in which they can spend the winter. (Photo: Today's Zaman, Şule Tülin Üner)

Sunday’s Zaman spoke to civil society and aid organizations, which are concerned about the problems of the more than 300,000 Syrian refugees living in İstanbul and the almost 2 million in Turkey at the onset of winter. The common complaints of Syrian refugees include problems with health, medicine, education and housing but they are also seeking more understanding and hospitality from the residents of İstanbul as they had no choice but to seek refuge as a result of the war.

The Syrian Nour Association is one of the civil society organizations helping Syrian refuges in İstanbul by providing them with medical and humanitarian aid. It has offices in Syria and İstanbul. Speaking to Sunday’s, Zaman Hamid İbrahim, the director of the association’s Saadetdere branch, says the Nour Association provides medical assistance for a nominal fee and free medicine to the Syrian refugees living in Saadetdere.

İbrahim says the medical services are provided by Syrian volunteer doctors who sought refuge in İstanbul after the war. İbrahim, who was a farmer in Syria before the war, says the main problem related to the health of Syrian refugees is medicine. Those Syrians who have a residence permit and passport can seek free consultations in Turkish government hospitals, but the government stopped providing free medicine to Syrian refugees seven months ago, İbrahim said.

The Syrian Nour Association, whose main İstanbul office is in the Fatih district, receives medical assistance from Turkish and other civil society organizations to provide free health services to the refugees in İstanbul and cities bordering Syria.

İbrahim says there are many Syrian refugees in İstanbul who are professional doctors, engineers, technicians and such, but they work as construction workers, janitors or garbage collectors for minimum wage.

Another Syrian refugee, Muhammed Ali Diyye, who was a taxi driver back in Syria, told Sunday’s Zaman they are able to overcome the difficulties like health problems or difficult living conditions but the most difficult thing is being treated like dirt. Diyye says his wife and children are Turkish citizens so he has the right to a residence permit. When he goes to the police or to government departments for some paperwork he is usually made to feel embarrassed because he is Syrian, Diyye says.

According to Diyye most people in İstanbul don’t want to rent their flats to Syrian families. When they are able to find those willing to rent their homes, the amount of rent is doubled, Diyye adds. “It was TL 300 to rent a two plus one flat in the Esenyurt and Avcılar districts of İstanbul a year ago, but it starts from TL 800 this year when they hear we are Syrians,” Diyye said.

Another Syrian refugee who doesn’t want to be named says he worked with the military before the war in Syria. He had a good income in Syria but now faces many difficulties in İstanbul. He said he was staying with his son in a flat in İstanbul but because of the complaints of neighbors he had to send his son and family to another flat, despite facing a lot of difficulties finding a flat to rent. “We used to see more hospitality and welcome in the beginning from our Turkish brothers. But today they consider us wild beasts just because of some boorish Syrians,” he added.

While talking about the difficulties that the Syrians in İstanbul face, Ahmed Gannam, the public relations officer of the Syrian Society for Humanitarian Aid & Development, said the Bashar al-Assad regime sent men to Turkey to tarnish the image of Syrian refugees. Gannam said there were many people who witnessed these men from the Assad regime appearing to be Syrian refugees being involved in assault, robbery, begging and other illegal activities.

The main problem with the coming of winter is to find houses for rent for those large Syrian families who live in small flats with their families or their relatives in İstanbul, Gannam said. There have been many complaints filed with the Syrian Society for Humanitarian Aid & Development of Syrians living in difficult conditions, like staying in a two-bedroom flat with other families, for example. There have also been many cases of Syrian refugees leaving without paying the rent or bills, creating a bad image for all Syrians, Gannam added.

The Syrian Society for Humanitarian Aid & Development mostly focuses on providing medical aid to Syrians along the Turkey-Syria border and operating a hospital in the Reyhanlı district of Hatay province with special permission from the Health Ministry. The hospital sees more than 300 patients daily and does at least seven critical operations every day free of charge, Gannam said.

When asked about the refugees living on the streets of İstanbul and their children begging at stop lights. Gannam said many Syrians are scared to go out because of the reactions from Turkish society and most of them now work in various jobs with minimal wages. Gannam says they are being exploited, working up to 12 hours in a day for a salary of TL 600.

Kadimoon schools started in İstanbul three years ago to meet the educational needs of Syrian children at the beginning of the Syrian civil war, Ragipoğlu said. Kadimoon schools have three centers in the Fatih, Esenyurt and Esenler districts of İstanbul with 2,000 students from first to 12th grade. Kadimoon schools are open to all Syrians for a nominal amount of TL 300 per semester, Ragıpoğlu added.

Public offices, particularly local administrations, remain indifferent to the problems of Syrian refugees because of fears that this will increase their workload. For this reason, Turkish and Syrian aid bodies and agencies are assuming greater responsibility, Ragıpoğlu said. She also stressed that the only way to get these children off the streets is education.

Referring to the three Kadimoon schools where more than 2,000 children receive education, Ragıpoğlu said these schools operate based on aid and support from agencies like Kimse Yok Mu (Is Anybody There) as well as Turkish and Syrian philanthropists. She also notes that the Esenyurt Municipality had donated the building which they are using as a school. The teachers in the schools are mostly Syrians who used to be teachers in their home country and work for minimal wages in Turkey.

Koçak told Sunday’s Zaman that the organization has reached out to more than 100,000 families in the cities where Syrian refugees mostly live since the war in Syria began in 2011. Koçak said that hot meals are distributed to more than 4,000 Syrian refugees daily in Kilis in the soup kitchen run by Kimse Yok Mu. According to Koçak, the smear campaign conducted by the Justice and Development Party (AK Party) government against Kimse Yok Mu will greatly affect the charity’s ability to help Syrian refugees.

There are still Syrian refugees who continue to live in scrappy tents with their families in the Esenler neighborhood of İstanbul. Muhammed Ali is a Syrian Turkmen who fled from the war in Syria with 130 people from the same village as they were afraid that Arabs would kill Turkmens. Ali and his family, consisting of 20 children and 10 adults, gather around a fire to get warm and are worried about the coming winter.

Ali says they are not staying in refugee camps because they are scared of Arabs and heard that people in İstanbul would help refugees but were disappointed when they arrived. Ali, pointing out that his kids who don’t have proper shoes, clothes or a winter coat, said they cannot return to their villages in Syria or to the camps on the border as there are Arabs, Syrian opposition, Shiites and even Islamic State of Iraq and the Levant (ISIL) members who don’t like Turkmens.

Selma Tatlı and Satı Kılıçer contributed to this report.