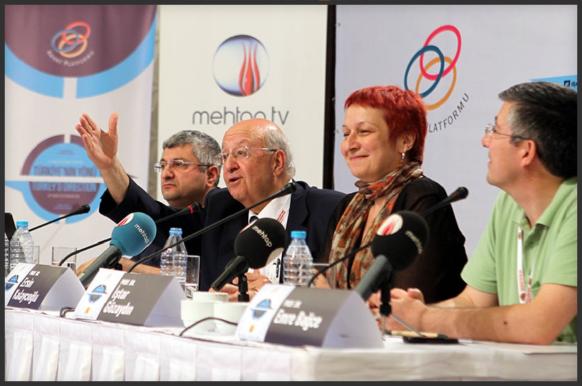 On June 20-22, the 33rd Abant Platform meeting was held in Akçakoca, Bolu province, to discuss “Turkey’s direction,” hosted by the Journalists and Writers Foundation (GYV). More than 100 intellectuals all over the world, including prominent scholars, journalists, NGO leaders and former politicians, attended the meeting.In his speech at the opening of the first session, Prof. Seyfettin Yuksel said: “If it had been said a few years ago that we would be discussing ‘Turkey’s direction’ in the coming years, none of us would have believed it. We were sure about Turkey’s direction.” Unfortunately, nowadays Turkey’s direction is seen as uncertain, and the country has strayed not only from its foreign policy but also from democratic norms and the rule of law in its domestic policies. Here are my notes from the conference.

All intellectuals who joined the conference agreed that Turkey needs to turn its face towards the European Union for democratization. In order to be an important player in the Middle East, Turkey should cooperate with the EU in its foreign policy.

For the last two years, Turkey has not been represented at the ambassadorial level in the major capitals of the Middle Eastern countries, which are Cairo, Damascus and Tel Aviv. This absence of formal representation, along with Turkey’s sectarian-centered foreign policy approach, has led to isolation in the region. While the Middle East is undergoing a new transformation with the Islamic State of Iraq and the Levant (ISIL) invasions, Turkey needs to reform its regional policy as well as its global foreign policy parameters.

The rhetoric and comments of government members no longer conform with diplomatic language. For example, anti-Western rhetoric about the invisible hand of Western powers and conspiracy theories that blame the EU and US have damaged Turkey’s perception. This has decreased Turkey’s credibility in the major European capitals and Washington.

Therefore, in its foreign policy, Turkey should keep the channels of diplomacy permanently open and be prudent about its diplomatic rhetoric.

Turkey’s soft power is much more effective than hard power. Turkey’s democracy, equality before the law and respect for freedom and rights are the basis of its attractiveness. An authoritarian Turkey is not an inspiring example or model for the Middle East.

Politics is not an area limited exclusively to politicians. Citizens have the right to be involved in politics through any means and modes. Inviting critics to form a political party or blaming them for carrying out “unregistered politics” are unacceptable. Creating a perception for ordinary citizens that “politics can only be done by political parties” and producing propaganda such as “businesspeople, the youth and professionals must be concerned with their own business, not politics” is a very wrong approach for participatory democracy.

Polls do not remove accountability to citizens; election times are not the only time in which politicians are accountable; ballot boxes cannot be presented as court decisions. Elections are not only tools for democracy; authoritarian and totalitarian regimes use elections too. Democracy is separated from them by transparency and freedom of information.

Instead of Ankara criteria and norms, Copenhagen (EU) norms should be implemented for a peaceful Turkey.

Many of the attendees expressed that the government’s authoritarian tendencies and actions will not change in the near future. There is no hope for pluralistic and participatory democracy soon.

As long as the Justice and Development Party (AK Party) does not have sufficient seats in Parliament to change the Constitution, it will continue to protect at least the fundamental rights of citizens and Turkey’s regime, a prominent constitutional professor said.

When I arrived home after the event, my wife told me that the government does not care what we discussed or what we announced in the final declaration. I told her that in democracies there are many ways to voice your concerns about politics and policies. This is one of them.

Indeed, the government prefers citizens to sit down and shut up in their home and not talk about politics. Thank to the organizers we have intellectuals who are aware that politics is an important business that cannot be left solely to politicians.

The full statement of the final declaration can be read at: http://tinyurl.com/khs49r9