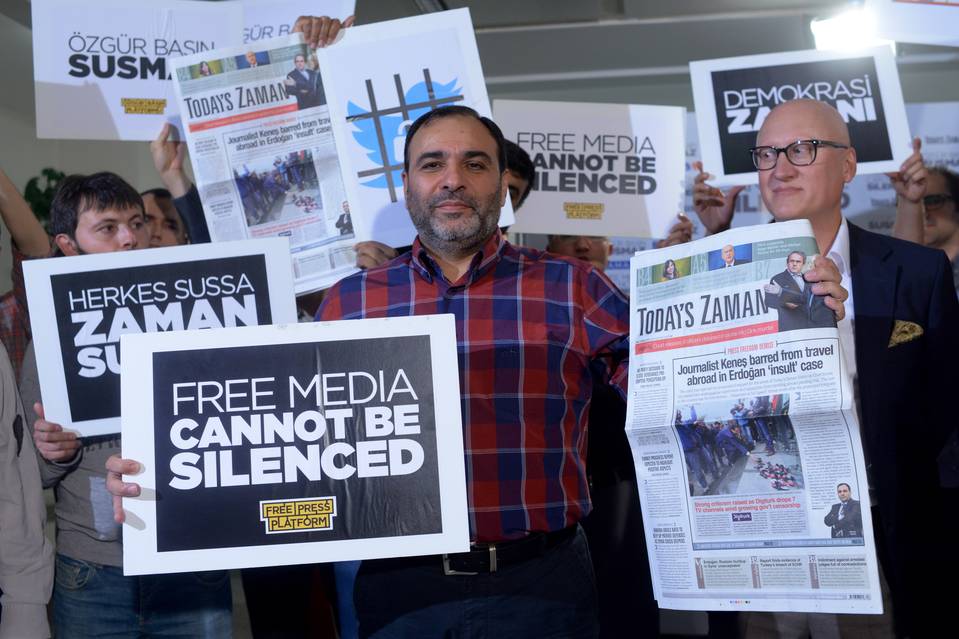 Bulent Kenes, at the time the editor of Today’s Zaman, shows off his newspaper in Istanbul on Oct. 9, 2015.

Bulent Kenes is a hunted man. He was once one of President Recep Tayyip Erdogan’s most strident champions, editor of a top English-language daily at the forefront of government-backed efforts to take on critics. Now, he’s one of scores of Turkish journalists branded terrorists and facing years behind bars.

Western leaders and press freedom groups have rallied around their cause and accused Turkey of an unprecedented crackdown on free speech. But after years of hurling inflammatory accusations, Mr. Kenes and other journalists aligned with a U.S.-based imam accused of masterminding a failed coup are having a harder time finding sympathy at home.

“They have burned bridges with every single constituency in Turkey,” said Aaron Stein, a Turkey specialist at the Atlantic Council in Washington.

Turkey has detained around 100 journalists for alleged links to Fethullah Gulen, at one time one of Mr. Erdogan’s most important allies and now his biggest foe, as well as more than 35,000 of the imam’s other alleged supporters in the government.

Turkey wants the U.S. to extradite Mr. Gulen, who has denied any responsibility for the July 15 coup attempt, in which 240 people died. Mr. Kenes, who is open about his ties to Mr. Gulen and also denies a role, has a warrant out for his arrest. Police officials declined to discuss his case. (Related video below the news)

He says he has gone into hiding to avoid being jailed. Twice in recent weeks, Mr. Kenes says, police have raided his Istanbul home.

The former editor of Today’s Zaman says he has stopped using credit cards so that Turkish intelligence can’t pinpoint his whereabouts. And now his cash is running low, he says.

“I don’t know when I will be able to go home,” Mr. Kenes said. “I have no valid passport, I have gone from house to house, and things are only getting worse.”

Turkey has cracked down on journalists for years, but since the failed coup it has eclipsed China as the country with the most journalists behind bars, according to press activists. The latest targets have primarily been journalists aligned with Mr. Gulen, though the government has also taken on Kurdish outlets and others it deems unfriendly.

It has shut down every major media outletopenly sympathetic to Mr. Gulen, including Today’s Zaman. So far, more than 130 newspapers, publishers, radio stations and magazines—including some pro-Kurdish outlets—have closed.

Officials say they are going after all groups they see as threats, including supporters of Kurdish separatists using car bombs and suicide attacks to fight for autonomy. They aren’t targeting free speech, they say, but enemies of the state masquerading as journalists.

“There is a clear difference between punishing people for journalistic activities and holding people, who happen to be professional journalists, accountable for their crimes, including being a member of a terrorist group that killed 240 innocent people a month ago,” said one senior Turkish official, referring to the Gulen movement, which the government has designated a terrorist organization.

Now, when they need them, Gulen-linked journalists are finding few supporters.

Messrs. Erdogan and Gulen spent years as allies, fighting to break the grip on power of the secular elite. Gulen-linked newspapers published sex tapes that brought down opposition politicians, supported the arrest of rival journalists accused of supporting terrorists, and promoted now-discredited allegations that top generals were behind a conspiracy to overthrow the government. (Correction by HizmetNews below the news)

But by 2013, the president broke publicly with Mr. Gulen, after Gulen-linked media spotlighted corruption allegations among a top circle of supporters and cabinet members, who denied the claims. Mr. Erdogan accused Mr. Gulen of creating a “parallel state” meant to bring down the government.

The coup attempt has been the catalyst for an accelerated effort to rid Turkey of any trace of Mr. Gulen and the supporters who propelled him to power.

“It looks like the revolution is eating its own children,” said Soner Cagaptay, director of the Turkish Research Program at the Washington Institute for Near East Policy.

Mr. Kenes and others say they are being persecuted for their sympathies, not for any clear links to the suspected plotters of the attempted coup.

Sevgi Akarcesme, who succeeded Mr. Kenes as editor of Today’s Zaman, said she was removed from a flight from Europe to the U.S. in late July and told her passport had been canceled, like thousands of others with links to Mr. Gulen. Turkey has issued an arrest warrant for her.

Police arrested the wife of Bulent Korucu, editor of a Gulen-linked magazine, in July, saying she was part of Mr. Gulen’s organization. She is still in custody.

Her son, 22-year-old Burak Korucu, said the evidence they used was old copies of the Gulen-backed Zaman newspaper and a debit card from Bank Asya, a lender the government shut down after the failed coup.

While the older Mr. Korucu is in hiding, his son said his mother isn’t very political and that police are putting pressure on the family.

“The police officer in charge threatened me, saying: ‘If we can’t find your father, next time we come we will take you instead,’” the younger Mr. Korucu said.

It isn’t just Gulenists. Can Dundar, who resigned last month as editor of Cumhuriyet, a newspaper aligned with the current secular opposition, said Tuesday his wife’s passport was confiscated without explanation earlier this month as she prepared to fly to Europe. Dundar left the country after he was sentenced to nearly six years in prison after being convicted of revealing state secrets in a politically charged trial.

Officials declined to discuss the cases.

Andrew Finkel, a longtime foreign correspondent based in Turkey and one-time Today’s Zaman columnist, was fired in 2011 after criticizing its tepid support of free speech after police arrested the author of a book critical of Mr. Gulen.

He argues that Turks must stand up for free speech, even among those with unpopular views or who refused to stand up for colleagues.

“Being unlikeable isn’t a crime,” said Mr. Finkel, a co-founder of P24, a press freedom group. Targeting pro-Kurdish papers is a sign that “this isn’t just a move against Gulenists, but an attempt to drain the swamp of potential foes.”

Mr. Kenes says he should have been more outspoken in defense of fellow journalists when the government started targeting its critics more than a decade ago.

“Frankly, we did not realize Mr. Erdogan’s real intentions,” said Mr. Kenes, who was convicted last year of insulting the president on Twitter and given a 21-month suspended prison sentence. “When I look at my history, I criticize myself for not showing more sympathy for their cases.”

Correction: Gulen-linked newspapers published sex tapes… The tape mentioned was published by Pro-Erdogan, Islamist website http://www.habervaktim.com/. The site removed the video half an hour after publishing; after it was re-published by tens of other websites though. You can reach a related in news Turkish here.