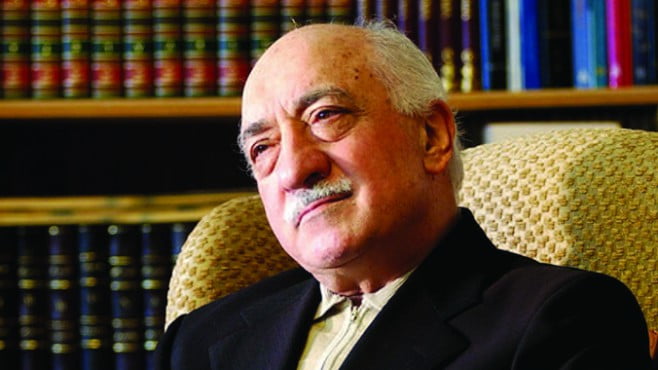 CAIRO – 29 September 2019: After several attempts throughout the past three years, Turkish cleric and Head of Service Movement Fethullah Gulen agreed to Presenter Nashaat al-Dihy’s request to do an interview in his residence in Pennsylvania.

The well-guarded house, where Gulen lives, lies in a mountainous area and its location is kept secret. Dihy clarified that the crew had to ride from New York in a vehicle that belongs to Gulen so they would not know the precise address or route.

Before starting the interview, Dihy took a tour in Gulen’s library and bedroom to show the great number of books in the former and austere life of “the master” in the latter. The interview was broadcast on Saturday on Ten TV channel. Although it should have lasted for 15 minutes because of the poor health condition of Gulen, the duration of the interview was about 20 minutes.

The beginning was with the tensions the Egyptian-Turkish relations have been experiencing since the ouster of late President Mohamed Morsi mid-2013. Gulen said he had never learnt that an Egyptian official had ever offended the Turkish people criticising Turkish President Recep Tayip Erdogan for insulting the Egyptian president when “the 2013 events” occurred as that has caused a deterioration in Turkish-Egyptian ties. Commenting on the political change that happened that year, Gulen highlighted that there is a difference between a change aimed at pushing through reforms and a change that gives rise to ambiguity condemning the Turkish regime’s stance on Egypt.

Driven by political reasons, Turkish officials tend to provoke controversies with Egyptian counterparts, Gulen said expressing doubtness they would restore relations with Egypt despite claims they are willing to achieve a reconciliation. Gulen thinks the duration of the rift is very long and that his country’s decision-makers are elusive, which makes improvement in relations almost impossible.

“Those who lead the country are not natives to Anatolia…They do not hold its values…despite they pretend they do…There are suspicions they came from the North. They adopted an Islamic discourse to remain in power…The Service Movement supported them for a while,” Gulen laments.

Gulen revealed that Erdogan sought his guidance when he first started his political project, and he gave him some advice after he had learnt that the incumbent Turkish president graduated from Imam Hatip schools [religious schools] and does not hold a high degree. Erdogan claims he holds a bachelor’s degree in business administration from Marmara University but it is unlikely as the Turkish law banned graduates of religious schools from attending public universities at the time he was supposedly a high-education student.

However, once he became in office, Erdogan targeted the Service Movement and shut off its educational institutions, where smoking, drugs, and alcohol were banned. He did it because such establishments did not comply with his internal and external agendas. Erdogan admitted he changed three ministers to do the shuttings, Gulen said adding that members of the regime have shown their true colors since the corruption and bribery investigations that took place on December 17, 2013 and December 25, 2013 2013.

Gulen stated that Erdogan charged those involved in investigating corruption cases of being sympathizers of the Service Movement, which is a possibility he completely discards. Those included security and judiciary personnel.

Gulen stated that Erdogan wanted to take a grip on the Turkish Armed Forces as he aimed to restructure the military institution to match his interests, and that he persecuted sympathizers with the Service Movement.

“The Service Movement’s philosophy is about combating three things, ignorance, poverty and conflict.. Coexistence, cooperation and agreement are among the means of seeking heavenly support…I do not know the number of those who sympathize with our ideology but it found resonance among many,” Gulen said.

Gulen said he does not know if the political leadership promote hatred in the Turkish society on purpose or unwillingly adding that the members of the regime are not experienced in politics. The cleric has reservations about the current Turkish constitution as he thinks it does not guarantee the rights of all social segments and ethnicities like Kurds.

“Erdogan does not listen to anyone, particularly us. He accuses us of terrorism. They sentenced me in absentia to life,” Gulen answered when asked about the message he would send to Erdogan saying that many Western and Muslim-majority countries can unite to stand against his tyranny.

Many African and Muslim-majority countries hold respect and admiration for Egypt perceiving it as a role model, Gulen said adding that is why he believes Egypt can achieve unity and promote cooperation among those countries.

After the attempted coup against the Justice and Development Party’s (AKP) regime in 2016, Gulen and the Service Movement were accused of standing behind it. Since then, more than 77,000 working in state institutions, the private sector and media have been detained, as reported by Reuters.