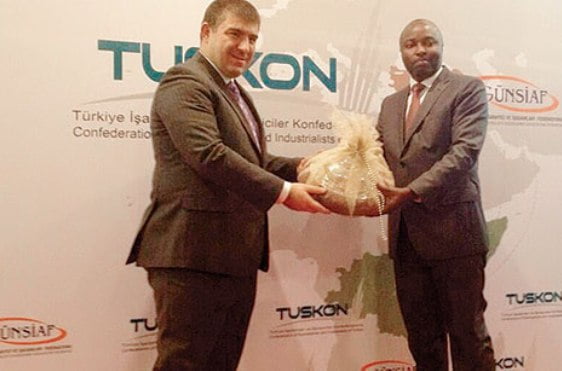 Businesses from East Africa are expecting to boost trade and investment partnerships with Turkey, company representatives told a summit held by the Turkish Confederation of Businessmen and Industrialists (TUSKON) in Gaziantep.

A total of 127 companies from 11 different countries in East Africa are participating in the Gaziantep summit, which started on Feb. 9 and will run until Feb. 12.

The Turkish and African businesspeople held roughly 5,000 bilateral business meetings. TUSKON has intensified efforts to help more Turkish firms branch out into promising African markets over the past five years. Turkey sells goods worth $813 million to East Africa per year, while imports from the region to Turkey amount to $160 million annually, according to 2013 figures. Turkish firms are keen to capitalize on increasing demand from the 350 million-strong population of the region, while African firms benefit from Turkey’s position as a bridge to surrounding markets.

The event’s official opening was held on Tuesday. Speaking at the opening ceremony, TUSKON Chairman Rızanur Meral said the confederation placed great importance on cooperation with African markets. “We are trying our best to introduce our companies to a flourishing African continent, helping them share expertise with their African partners,” he said.

State representatives from Uganda, Rwanda, Djibouti and Kenya also called on Turkish companies to enhance cooperation with East Africa and invest more in the region, which has a gross domestic product (GDP) of $350 billion.

“We will stay out of domestic political discussions and exert our energies on our primary job which is to work even harder to expand the Turkish presence in global markets,” TUSKON Secretary General Mustafa Günay told the event on Tuesday.

TUSKON has been promoting the improvement of Turkey’s trade ties with Africa and has already conducted a series of meetings to boost commercial relations with African countries. It is thanks to these efforts that Turkish firms have enjoyed considerable success in Africa.