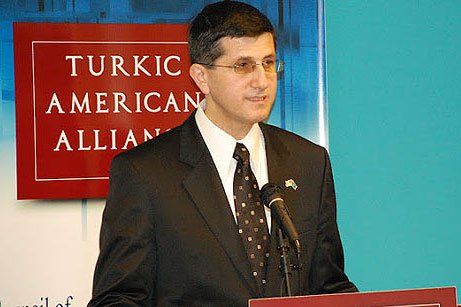 Turkish civil society organizations in the United States have condemned bomb attacks at the Boston Marathon which left three people dead and more than 100 injured on Monday.
Two bombs exploded in the crowded streets near the finish line of the Boston Marathon, killing at least three people and injuring more than 140 in a bloody scene of shattered glass and severed limbs.

A White House official, speaking on condition of anonymity to the Associate Press, said the explosions at one of the world’s oldest and most prestigious races was being treated as terrorism although US President Barack Obama pointedly avoided using the words “terror” or “terrorism.”

The Turkic American Alliance (TAA), a leading Turkish-American umbrella organization, released a statement on Tuesday in condemnation of the attacks.

“We, the Turkic American Alliance, are truly shocked and appalled by the news that just came regarding the explosions near the finish line of the Boston Marathon. We express our condolences for the families and loved ones of the three victims and at least 140 injured from the explosions.”

“The TAA condemns in the strongest terms this tragic event; as Turkic Americans, we stand with the people of Boston. We have no doubt that those who are responsible for this horrific attack will not escape the necessary justice. Once again we offer our deepest condolences to the families and loved ones of those who lost their lives and our thoughts and prayers go out to all those injured,” the TAA’s statement said.

The fiery twin blasts took place almost simultaneously and about 100 yards (meters) apart, knocking spectators and at least one runner off their feet, shattering windows and sending dense plumes of smoke rising over the street and through the fluttering national flags lining the course.

Raindrop Foundation President Mehmet Okumuş also made a statement on Tuesday condemning the attacks at the Boston Marathon on behalf of all Turkish Americans.

“This attack is one that was made against the whole of humanity. All terrorist activities are blows to peace. No matter for what purpose they are committed, no acts of terrorism can be condoned,” he said, offering his condolences to the families of the victims.

The Niagara Foundation, based in Chicago, also condemned the attack in a statement on Tuesday.

“As an organization with a mission to promote peace, respect and dialogue in our society, Niagara Foundation strongly condemns the attack at the Boston Marathon. We are repulsed once again by this senseless act of terrorism and saddened by the loss of innocent life. We offer our thoughts and prayers for the victims. We hope that the perpetrators will be brought to justice as soon as possible,” a statement from the foundation said.

Council of Turkic American Associations (CTAA) President Furkan Kosar said his association condemns the attack in the strongest terms possible and offered his condolences to the families and loved ones of those who lost their lives.

Emre Çelik, president of the Rumi Forum, said his association condemns the actions of those responsible for the horrific incidents in Boston on Monday.

“Our heartfelt sympathies go out to the victims and their families, the wider Boston community and all Americans. Terror, violence and the killing of innocent people can never lead to beneficial results. The Rumi Forum believes that dialogue is the most important way to bring people together to discuss differences and plays the utmost important role of overcoming prejudice and ignorance,” Çelik said in his statement.