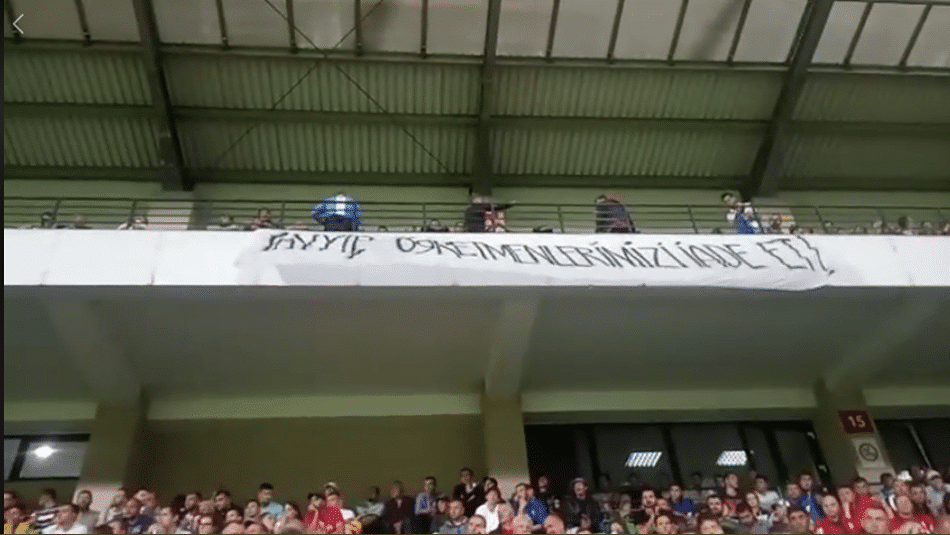 Human rights activists from the “Occupy Guguta” movement in Moldova unveiled a banner on Tuesday night at the national football match between Moldova and Turkey, with a critical message for the authoritarian Turkish President, Recep Tayyip Erdogan.

The activists at the Zimbru Stadium in Chisinau urged Erdogan to release seven Turkish teachers working in Moldova who were taken back to Turkey by force in September 2018 in a joint operation of the Moldovan and Turkish secret services.

“Erdogan, give us back our professors!” the activists wrote on their banner.

The seven teachers belonged to the private Orizont chain of high schools in Moldova, which are affiliated to the Hizmet movement of the exiled Turkish cleric and Erdogan foe Fetthulah Gulen – who Erdogan blames for a failed coup in 2016. Gulen, who lives in the US, has denied all connection with the affair.

The Turkish citizens were seized in an alleged deal between Erdogan and the pro-Russian President of Moldova, Igor Dodon, and the Moldovan oligarch Vlad Plahotniuc, who then de facto ran the ruling Democratic Party-led government in Moldova.

Andrei Lutenco, an activist with Occupy Guguta movement, told BIRN that the banner was posted for about ten minutes until the private security at the stadium came and forced them to take it down.

“They did not invoke any reason, they just came and said take it down. They didn’t explain why. At one point they ripped it [banner] from out of my hands. The security became a little violent and strong-armed my colleague, though it was not so serious,” he said.

Lutenco added that his colleague had filed a complaint to the police about the incident.

“I hope the message will get to the Turkish press also because we can do nothing here for those teachers, but those there can save their lives and return them to their families,” another activist, Ion Andronache, said on Facebook.

A deputy from the governing pro-Western ACUM bloc, which is in coalition with the Socialists, Dumitru Alaiba, said freedom of speech should be respected in Moldova.

“The message on the banner may or may not be liked. The regulations may be different. The problem resides in how to act in respect of the right of people to express themselves freely in a free country,” he said on Facebook.

The present Moldovan parliament is now investigating the suspicious case conducted last year by former Moldovan officials together with the Moldovan Security and Intelligence Service SIS.

The General Prosecutor’s Office on Tuesday said the former deputy director of the SIS, Alexandru Baltaga, detained at the end of last week over the expulsion case, would remain for the next 30 days under house arrest.

Olga Poalelungi, head of the Bureau of Migration and Asylum in Moldova, has also been charged with overstepping her official duties, with serious consequences.