Turkish government has transferred about 49,4 billion liras ($11 billion) of assets of 1,124 companies seized from those who have alleged affiliation to the Gülen movement to a special fund under a crackdown that began following a controversial coup attempt on July 15, 2016, revealed by a survey conducted by Brussels-based the Arrested Lawyers Initiative.

According to the survey, which was published by European Interest, at least 850 of the companies were seized by the government since the coup bid and have now been controlled by the Savings and Deposits Insurance Fund (TMSF).

Survey said, as of June 4, 2018, the TMSF controls 1,124 seized companies and also assets of 127 persons. Among the companies are Boydak Holding, which controls 34 separate firms including the Bellona and İstikbal furniture makers and retailers, which have 1,240 stores. Boydak employs 13,000 people and indirectly creates 110,000 jobs, the survey said.

The names of other seized major Turkish companies cited in the survey include Koza, Dumankaya, Akfa, Orkide, Sesli and Naksan

Turkey has seized the companies under presidential decrees and their owners had no judicial recourse. The proprieters are allegedly members of the Gülen movement. Trustees have been appointed to run the companies against their shareholders’ wishes.

The companies are active in all areas of business and trade such as investment, mining, petrol distribution, automotive, auto-gas, energy, transportation, food, agriculture, home textiles, furniture, jewellery, pharmaceuticals, law and IT, said the survey.

The value of the assets seized does not include those of 127 individuals, 19 unions, 15 private universities, 49 hospitals, 145 foundations, 174 media outlets, 1,419 foundations and another 2,271 education companies, it said. The total value of all assets confiscated could total 100 billion Turkish liras, added the survey.

According to the survey, at the very beginning of the state of emergency (OHAL) declared on July 23, 2016 in the aftermath of the coup bid, 934 private schools, 109 dormitories, 35 hospitals, 15 private universities, 16 unions, 104 foundations, 1,125 associations were dissolved and all their assets including real estates, chattel goods, bank accounts, intellectual properties and other financial assets were transferred to public treasury. As of June 4, at least 4,100 profit-oriented or non-profit legal entities were dissolved, and their assets were confiscated under decree laws without any judicial procedure.

“This arbitrary violation of rights to property has a devastating effect on a county’s prospects for economic development,” the survey stated and added that “Insecurity among investors, domestic or otherwise, as to their investments often result in serious economic crises in countries like Turkey which is heavily dependent on foreign investments and consequently impoverish not only dissidents but also supporters of their respective regimes.

The survey stated that the first victim of the widespread seizing practises was Koza İpek Holding, a conglomerate of 22 companies, including a media group with two TV channels and two daily newspapers. “The holding was seized by Erdoğan Regime on the October 26, 2015 and the management of all of its enterprises were given to a pro-government trustee board.”

“1,124 companies were transferred to the TMSF since July 15, 2016. According to our survey, at least 850 of them were seized after the failed coup attempt. These 1,124 separate companies are running thousands of branches. For instance, Suvari Giyim Co (clothing company) seized by decision of Adana Peace Criminal Judge has 148 branches in 14 different countries; Boydak Holding seized by decision of Kayseri Peace Criminal Judge is running 34 separate companies; only 2 of its 34 companies, Bellona and İstikbal have 1,240 furniture (franchise) stores across the world. Boydak Holding employs 13,000 workers and creates (indirectly) 110,000 jobs,” said the survey by the Arrested Lawyers Initiative. 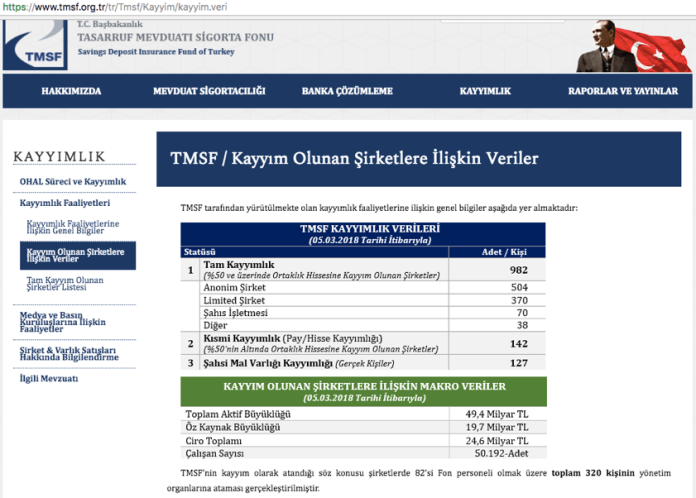 Website of the Turkey’s TMSF: As announced in the web site of the TMSF, total worth of the seized companies is 49,4 billion Turkish liras and those companies employ 50,192 workers.

Turkey has suspended or dismissed more than 150,000 judges, teachers, police and civil servants since July 15. On December 13, 2017 the Justice Ministry announced that 169,013 people have been the subject of legal proceedings on coup charges since the failed coup.

Turkish Interior Minister Süleyman Soylu announced on April 18, 2018 that the Turkish government had jailed 77,081 people between July 15, 2016 and April 11, 2018 over alleged links to the Gülen movement.