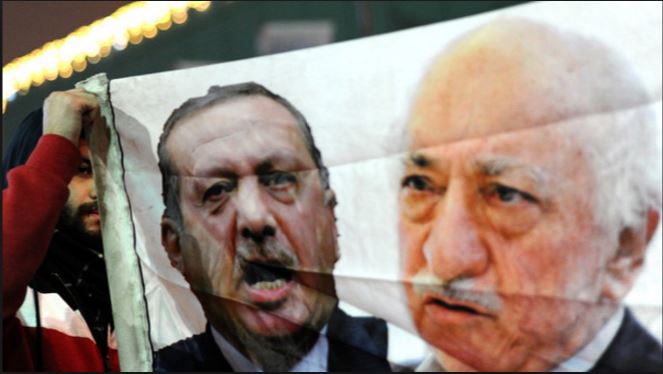 In a statement to Foreign Policy, Turkish Embassy spokesman Naci Aydan Karamanoğlu said evidence linking Gulen to the coup “will be submitted in due time.”

He added that “it would be impossible to send so much evidence on the coup attempt just days after it happened.”

But top Turkish officials have not been similarly patient when demanding the immediate deportation of Gulen, whom they call a “terrorist.”

Ahead of Joe Biden’s visit to Turkey on Wednesday, Turkish President Recep Tayyip Erdogan promised to tell the vice president that the U.S. does not “have the right to hem and haw. You have to hand him over.”

He previously warned the White House that it had to “choose between Turkey and Gulen.” Turkey, an important partner in the fight against the Islamic State, owns an airbase the U.S. uses to stage airstrikes in Syria.

Turkish demands for Gulen’s extradition have also given way to a wave of anti-American charges and criticism in the Turkish press, including unsubstantiated allegations that U.S. officials attempted to assassinate Erdogan or that the military putsch was planned by the Wilson Center, a U.S.-based think tank.

Gulen, an influential preacher and a onetime political ally of Erdogan and his AKP party, currently lives in a secluded compound in the Pocono Mountains. He and his lawyers deny any involvement in the coup.

During his visit, Biden said that it is “totally understandable why the people of Turkey are angry,” but noted that America’s system of government has separate and independent roles for the executive and judicial branches and the president could not simply order the extradition of Gulen unilaterally.

Turkey’s admission that it hasn’t sent evidence about Gulen’s activities related to the coup may have been prompted by an op-ed written by Biden in Turkey’s Milliyet newspaper on Wednesday. In it, Biden said the U.S. would deport Gulen if Turkey can prove that he masterminded the coup but added that the U.S. has yet to receive “any evidence from Turkey relating to the attempted coup.”

“It seems like a calibration in response to Vice President Biden,” said Steven Cook, a Turkey expert at the Council on Foreign Relations. “For over a month they have been insisting that Fethullah Gulen was responsible for the coup and that they had evidence of his guilt.”

Henri Barkey, a Turkey expert at the Wilson Center, said Turkey may have decided to jump the gun in demanding Gulen’s extradition in order to corner the U.S. in the “Turkish public eye.”

In an email exchange, Karamanoğlu, the embassy spokesman, said that the U.S. has received an extradition request from Turkey based on Gulen’s activities “before the July 15th failed coup attempt.”

“Fethullah Gulen was already under investigation for establishing a terrorist organization and illegal activities against the state among other charges before the coup attempt occurred,” Karamanoğlu said.

U.S. officials have never indicated that Gulen might be extradited for actions he carried out before the coup.

Aaron Stein, a Turkey expert at the Atlantic Council, said the idea that Gulen has been working to undermine the government “has been around in Turkey since the 1980s.” A warrant was issued for Gulen’s arrest in August 2000 as prosecutors claimed he had infiltrated key government institutions in order to remake the Turkish state. In 2006, a Turkish court cleared him of wrongdoing before he received a green card in 2008.

“The accusations aren’t new,” said Stein. “I think what many people should be asking is, if he was such a threat, why was he such a close AKP ally for years.”