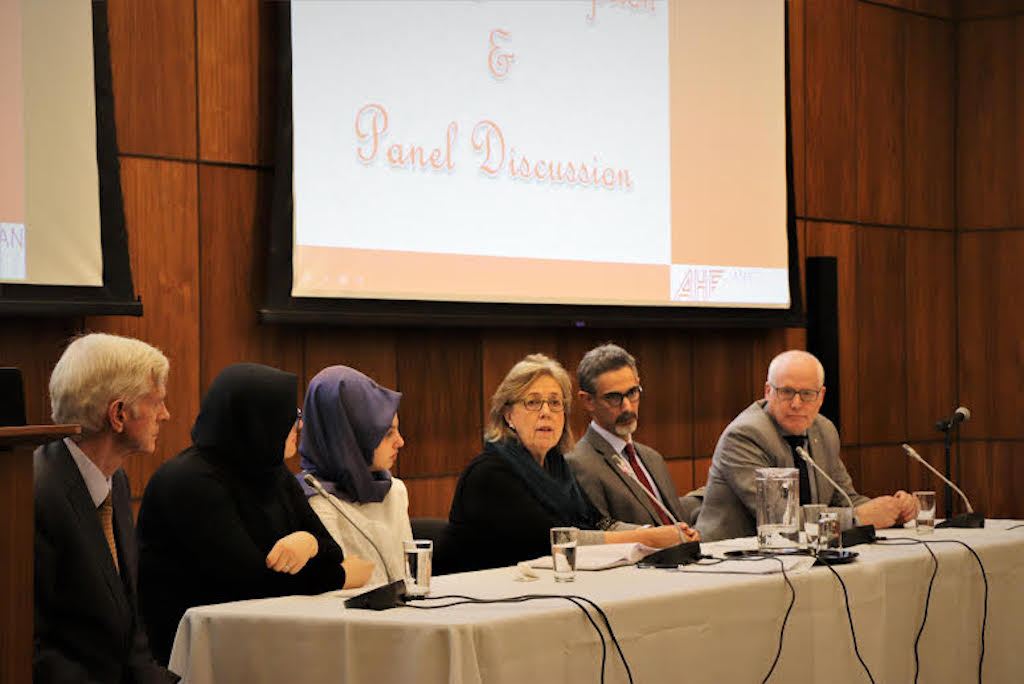 Canada’s capital city of Ottawa hosted an important panel discussion organised by the Anatolian Heritage Federation (AHF) on “Democracy in Turkey, Human Rights and Freedoms” on Tuesday evening. The discussion, moderated by Canadian human rights advocate David Kilgour, was participated in by Michael Levitt, chairman of the International Human Rights Committee in the Canadian Parliament and a member of the ruling Liberal Party; Alex Neve, secretary-general of Amnesty International Canada; and Lorne Waldman, one of Canada’s most famous lawyers, via video conferencing from Toronto. The event, which the Turkish Embassy in Ottawa tried to prevent from taking place, was attended by numerous parliamentarians.

Two female guests who were subjected to persecution by autocratic Turkish President Recep Tayyip Erdoğan’s Justice and Development Party (AKP) government also participated in the panel discussion and and shared their experiences. Around 160 attendees who filled the hall were reportedly horrified by the heartbreaking stories of the victimized women and could not hold back their tears.

Speaking on the dire situation in Turkey and the human rights violations targeting alleged members of the Gülen movement, MP Michael Levitt said: “It is bittersweet to be here with you. It is very sad that people are in this position. Families are torn apart. Academics, media professionals, students and just ordinary people on the streets of Turkey are being taken off and placed in detention without charge, without a process.”

Levitt also added that “the repression of democracy in Turkey is a great concern, something that my colleagues and I under a subcommittee from across parties are deeply concerned about. And I want to tell you that I stand here again, if my colleagues would be up here with me, we would all say that we want to hear your stories.”

“Tonight is a night with two purposes. It is a night of celebration of this wonderful community, and it is also a night for you to deliver a message to remind us all up here on the Hill that freedom and democracy in Turkey are absolutely essential, and for you to raise your voices for common cause with people in Turkey and families there,” said Levitt.

Underlining the fact that Taner Kılıç, the Turkey president of Amnesty International, was jailed on allegations of supporting the so-called “terrorist organization FETÖ” and having the ByLock mobile messaging app on his phone, even though he did not, Secretary-General of Amnesty International Canada Neve provided information about human rights violations in Turkey.

“Amnesty International [has been] active for 57 years, and they have never experienced [anything] like this before. In Turkey, any person can be detained and arrested due to having a communication app ByLock, or sending their child to a Gülen movement-affiliated school, or having a bank account in Bank Asya,” Neve said, adding that “Turkey comes first in the list by having the highest number of jailed journalists.”

“Yet, Turkey continues to see mild criticism. The United Nations Human Rights Council is in Geneva right now, an opportunity for these great concerns. Hardly a word of concern uttered. Why silence from Canada and the rest of the world? Why the unwillingness to raise concerns? Why the lack of action? This has to change,” said Neve.

Leader of Canada’s opposition Green Party Elizabeth May said during the discussion that “I am entirely horrified by the behaviour of the Turkish government. We need to be more speaking out loud.”

“I am wondering how somebody could condemn amnesty International’s officials, and place people with huge sentences in jails. It is a real condemnation of the international community as a whole. This has not been raised by the United Nations, Turkey’s traditional allies, this conduct is not acceptable. And we as allies of Turkey cannot accept this behaviour to go on. So we need to be speaking out more forcefully,” said May.

Lorne Waldman, an immigration and refugee lawyer in Toronto, connected to the event via Skype and said: “We have a large number of people who are seeking asylum, and fortunately for the most part they are accepted, but there are a few members who have not fully appreciated the seriousness of the situation in Turkey. So, we have some clients whose claims have been rejected even though it is clear to us, there is a great risk in returning to Turkey.”

“However, I believe that the government ensures that all refugee claim cases are carefully scrutinized before any refugee claimant who has been rejected has to return to Turkey,” Waldman said and added: “The second issue is that the process for family reunification for refugee claims is extremely slow. The third issue is Turkish people in Turkey and those in third countries. Canada should have a sponsorship to save those people.”

It was learned that the Turkish Foreign Ministry was disturbed by the panel discussion that brought human rights violations in Turkey to the agenda of Canada. Selçuk Ünal, Turkey’s ambassador in Ottawa, tried to prevent the event from taking place. After he failed in that endeavor, members of the Turkey-Canada Friendship Group in the Turkish Parliament wrote a letter to Canadian parliamentarians requesting that they not attend the event.

Turkey has suspended or dismissed more than 150,000 judges, teachers, police and other civil servants since July 2016. Turkey’s interior minister announced on December 12, 2017 that 55,665 people have been arrested.

Turkey’s state-run Anadolu news agency reported on March 15, 2018 that at least 402,000 people have been the subject of legal proceedings initiated by the Turkish government over alleged links to the Gülen movement.