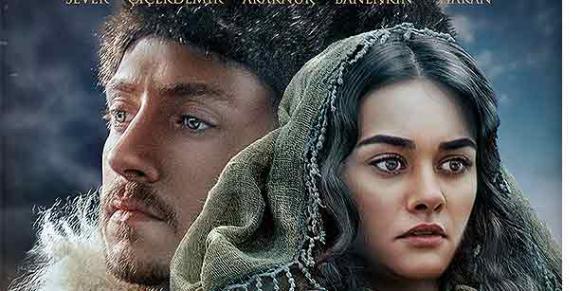 The poster of the “Birleşen Gönüller” (The Converging Hearts), a movie that was released to Turkish audiences on Friday.

The film “Birleşen Gönüller” (The Converging Hearts) was released to Turkish audiences on Friday.

I think the “money pool media” will stigmatize it in the news as a movie of the “parallel state” and condemn the actors for working for the parallel state. Such news stories are, unfortunately, quite normal in today’s Turkey. However, such piffles cannot at all overshadow the success of the film.

The film is based on a true story that begins in the Soviet Union during the years of World War II and reaches Central Asia in the 1990s.

It has a touching plot. Yunus, a committed teacher, and his wife, Dilek, leave their homeland Turkey with their two children for Kazakhstan to open a Turkish school. Dilek is reluctant to move and experiences hard days there since Yunus spends almost all of his time readying the Turkish school. Cennet, an elderly woman who has been waiting for her husband to come home for half a century, helps Dilek get accustomed to her new life. Cennet tells her story to Dilek to show her she can also be patient.

Cennet married Niyaz 50 years ago, in a time of war. Her beloved husband is taken by the Soviet army to join the military and fight against the Germans. After a while, the village where Cennet lives is occupied by the Nazis and Cennet is sent to a labor camp. Cennet and Niyaz, who escaped from the army to see his wife, find each other. They make a plan to escape the labor camp, but in the end they are pulled apart again. Cennet is still waiting for Niyaz 50 years later because she has made a promise to him.

The sacrifice and love that drive Yunus to open a school in Kazakhstan are comparable to the eternal love Cennet bears in her heart for her husband. One day, Cennet and Niyaz find one another again in a magical way, helped by Yunus and Dilek’s existence in Kazakhstan.

This film is a must-watch for any person who wants to know how the Hizmet movement has reached 160 countries. The teachers who leave everything behind to go to far-away places have only one dream: To put love and fraternity in every heart they can reach. This dream cannot be achieved without pain, patience and the shedding of tears. Thus, the tears of Dilek in the film and the pain Cennet feels mean so much more in real life.

Hizmet, through building bridges between different cultures all around the world, has succeeded in reaching more than 160 countries. Young teachers who have graduated from prestigious universities have not chosen to earn a great deal of money; they have chosen absence from home to share the invaluable things they have with people they can reach. Such a sacred commitment cannot be understood by those who don’t know what altruism means. “Birleşen Gönüller” tells us to keep our hope alive through bad times and that this is what life is meant to be.