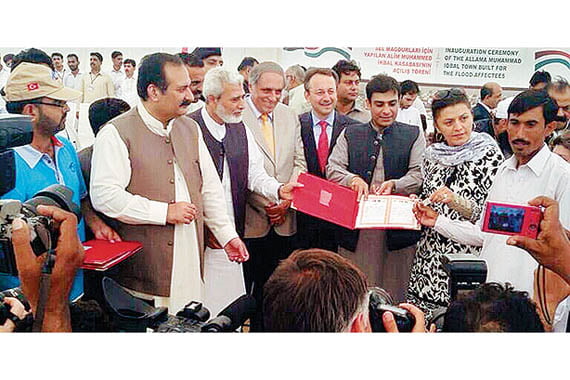 A housing complex built by a Turkish aid foundation will be named after Mohammed Iqbal, the spiritual founder of Pakistan who led a nationwide campaign to help Turkey during World War I.
In the wake of a flood that killed nearly 2,000 people and affected at least 20 million Pakistanis in 2010, the Turkish Kimse Yok Mu (Is Anybody There?) foundation went to the country to provide immediate aid including shelter, food and medicine. With $7 million in donations from Turkish philanthropists, Kimse Yok Mu built a small housing complex on a 110-decare area in the Multan area of Pakistan’s Punjab province. The model village, which was constructed in 18 months, has 296 houses, a mosque, a school, a commercial market and six plots for recreational parks. And the foundation’s executives are naming the complex Allama Mohammed Iqbal Town.

During World War I, Pakistan’s spiritual founder and national poet Iqbal led a nationwide campaign in Pakistan to send aid to war-torn Anatolia. At his urging Pakistanis sent around 7 million pounds to Anatolia.

Kimse Yok Mu has been operating in Pakistan since October 2005, when an earthquake devastated the north of the country. The foundation has sunk 178 water wells in Pakistan so far, and 86 wells are under construction. Across Pakistan, 800,000 people benefit from clean water provided by the foundation and its donors. The total aid provided by Kimse Yok Mu to the people of Pakistan exceeds $30 million.

Kimse Yok Mu Foundation, which has been giving off Ramadan joy with the slogan “Fill up your umbrella of mercy with the abundance of sharing” in 110 countries on 5 continents, lifted up this time the orphans in the Nigerien capital Niamey.