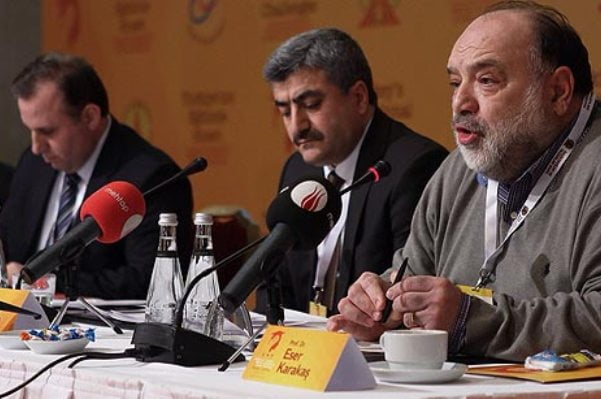 The Abant Platform, organized by the Journalists and Writers Foundation (GYV), holds its 31st meeting, titled “Turkey’s Educational Challenges: Educational Policy and the Search for Solutions” at the Conrad Hotel in İstanbul from Feb. 22-23. Educators, bureaucrats, civil society organizations and private education foundations from Turkey, Australia, Japan, Germany, South Korea, Nigeria and Brazil, among other countries have attended the meeting.

Holding the opening speech of the meeting, GYV President Mustafa Yeşil pointed to the importance of education in a country. He said that education, with no doubt, is the most important issue for any society, adding that every other issue somehow relates to that major one. Stating that the Abant Platform will be discussing basic issues of Turkey’s Educational Challenges with the contribution of expert opinions from different countries in two-day meeting.

“Like in many other countries, education is an area loaded with problems in Turkey. When we consider rapid urbanization, changing social demands, the expectations of newly opened business sectors in terms of human resources, these problems cease to be surprising. Population growth, the issue of capacity stemming from limited human resources and the ways employed to overcome the issue in terms of succession between the grades are the core topics that come to the fore. Preparation processes of entrance exams is the central theme today and that relates to policy makers, educational bureoucracy, teachers, parents and most importantly students; basically almost everyone,” Yeşil explained.

Listing some of problems in Turkish education system, Yeşil said that the legitimate complaints of teachers and those who are looking forward to be teachers are waiting for positive responses. “Text books make another urgent matter; how compatible their content is a major concern in terms of pluralist societies of the day and the attitude towards minorities. Our lack of success in foreign language education openly contradicts with the targets of the country claimed by the authorities. The provision of education for handicapped the special education students is of equal importance,” Yeşil added.

Yeşil said that the road to a healthy education system goes through joining hands of various groups of society in search of an answer to the very question of “What is the aim of education?” adding that once there is a clear consensus on the answer of this question, policy making processes will run in much more efficient ways. “The experience we had with Abant meetings show that once we lay the grounds as inclusive, democratic, civilized and free, different opinions are raised to construct a collective monument and important steps are taken towards possible solutions.” Yeşil noted.

Professor Eser Karakaş from İstanbul Bahçeşehir University was the first speaker in the first session. He harsly criticized the education curriculum of Turkey, stating that this curriculum is based on unrealizable and irrational objectives. “When we look at the curriculum of high school in Turkey, we come up with a very difficult curriculum. For example, there is even a lesson titled ‘information theory’ in high school curriculum. We experience difficulty in finding students to receive this course even at the university. Actually, I wonder how this course is given at a high school or who give this lesson. We have to set more reasonable objectives while preparing a curriculum. Antoher issue that I want to touch is the lack of importance given to postgraduate education in Turkey. High amount of money is allocated for the bachelor’s degree education in Turkey but the postgraduate education is neglected in the country. The postgraduate education should be encouraged more in Turkey to have more sophisticated generations,” Karakaş said.

Karakaş also said that the mentality of educators should also change, adding that it is very easy to access to knowledge under current technological conditions and via social media, but educators still regards education as information transfer process. “We can all access to any kind of information we want via our smart mobile phones at anywhere we want. Restricting the information transfer at schools is no longer reasonable. Turkish education system should update itself according to developments happening globally.” Karakaş highlighted.

Another speaker in the first session, Professor Yunus Çengel from the University of Nevada said that there is a serious disconnection between the education provided at Turkish schools and the real life. Çengel said that the schools should prepare students to real life, adding that students should be taught how to learn, analyze and improve their presonal talents and capabilities at schools. Stating that those who graduate from high school experience difficulty in adapting to real life after the school, Çengel also said that the character development and social skills of students should be neglected in education system.

Highlighting also the importance of dershanes, privately owned university preparation institutions, Professor Ludwig Haag from Germany said that dershanes guarantee equality of opportunity in education system. Stating that 1.5 million students benefit from dershanes in Germany, Haag said that the number of dershanes across the world has been increasing each year.

Associate Professor İlhan Dülger from the Middle East Technical University (ODTÜ) said that the dershanes are inseparable part of Turkish education system unless the Student Selection and Placement Center (ÖSYM) stops asking questions outside of school curriculums at public examinations and stop use multiple choice questions at those exams. Ülgen also said that the need for dershanes will continue to exist unless the quality differences between schools across Turkey are completely resolved.

Turkish government introduced a controversial draft bill seeking to close down dershanes in October 2013. The parliamentary Education Commission on Friday started to discuss the bill which is expected to be sent to the General Assembly within the next week.

According to the bill, exam preparatory schools will be allowed to operate until Sept. 1, 2015. All preparatory courses will be closed down after this date. Those exam prep schools that have accepted a transformation into private schools will have to meet the necessary requirements by June 2018. The bill states that those exam prep schools aiming to become private schools will be provided a certain amount of money. Those schools that fail to meet the necessary requirements by June 2018 will be closed down and the money provided to them will be paid back to the ministry with interest.

The government, in a surprise move, decided in November of last year to close down the exam prep schools, stirring a massive debate. These schools, with their affordable fees, are regarded by mostly middle or low-income families as an equalizer of educational opportunities. Although there has been a strong public reaction against the push to close these schools, the government also insists on shutting them down.