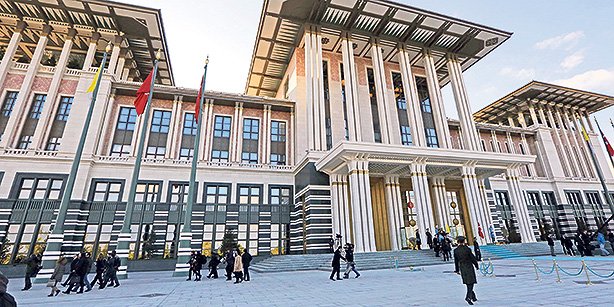 Gülen, who has appeared on the front pages of pro-government media almost every day since the corruption scandal of December 2013, is living a reclusive life in rural Pennsylvania with nearly two dozen of his students. Gülen says he pays the rent for the room he uses in the compound, which belongs to the Golden Generation Foundation, rejecting accusations that the compound is a luxurious mansion.

“They gave him 100,000-120,000 acres of land, and look at his dynasty,” Erdoğan declared before a cheering crowd of his supporters in the Black Sea province of Samsun on Monday. Erdoğan’s rally is designed to help the ruling Justice and Development Party (AK Party) secure the necessary number of seats in Parliament to transform the country’s parliamentary system into a presidential one.

Erdoğan spoke a day after a helicopter rented by the Sabah daily hovered above the compound where Gülen lives in the western Pennsylvania town of Saylorsburg. The Sabah daily is a fiercely pro-government news outlet owned by Erdoğan’s son-in-law. It was Sabah which first claimed on Monday that the foundation’s buildings are scattered across 123,000 acres of land. Emrullah Polat, an official from the foundation, dismissed the claim, clarifying that the foundation’s land is 24,000 acres.

Turkish pro-government media, along with government officials, frequently highlight the compound in order to defame Gülen as part of the orchestrated push by the authorities to bury the movement he founded. Many of Gülen’s supporters were thrown out of government jobs, their businesses raided and their schools shut down, and some of them were jailed on trumped-up charges. The authorities even canceled a bus route that carries students to Fatih University – an institution of higher learning founded by sympathizers of Gülen. Turkish ambassadors all around the world visit local officials visit to ask for the closure of schools built by followers of the Gülen movement.

Erdoğan accuses Gülen of plotting against his government, acting through twin investigations which uncovered extensive corruption in his administration in December 2013, targeting the president and his inner circle. Gülen rejects the charges.

Erdoğan has mobilized the entirety of the state’s resources in an effort to contain the corruption scandal. Since earlier last year, all suspects have been released, charges against them were dropped, prosecutors and judges supervising the investigation were removed from their positions and the police officers who carried out the probe were arrested.

The compound in which Gülen is living was built by the foundation in the early 1990s, and the Islamic scholar has been staying there since 1999. The property consists of eight townhouses that serve as dorms for guests and one main building composed of a prayer hall, a conference hall, a dining hall and Gülen’s room, along with several guest and study rooms. Gülen almost never leaves his residence in this town of slightly more than a thousand people which is surrounded by dense forests and usually covered with snow between November and April.

As Turkey approaches key parliamentary elections scheduled for June 7, Erdoğan has sharpened his rhetoric in an effort to at least preserve his support base of more than 40 percent. Debates surrounding his palace and top imam Mehmet Görmez’s luxurious car have drawn the ire of many AK Party supporters.

Government whistleblower Fuat Avni claimed last week that a poll Erdoğan sanctioned showed that the support for the ruling party has dropped as low as 39 percent and that the pro-Kurdish Peoples’ Democratic Party (HDP) has exceeded the 10 percent electoral threshold. With these figures, assuming that the two other large political parties maintain their own levels of support, the AK Party will be forced to attempt to form a coalition government. A poll by Gezici, a new research center with little credible history, revealed that AK Party rating dropped to 38 percent.

TV channels such as Samanyolu and Bugün constantly highlight Erdoğan’s lavish lifestyle, and the cost of his palace is at the center of the criticism. Last week, the authorities moved to take these TV channels off the Turkish state satellites to prevent them from broadcasting in Turkey. In Ankara, prosecutors asked TURKSAT to cancel their licenses. On Monday, former Erdoğan speechwriter and current parliamentary candidate Aydın Ünal likened the Samanyolu and Bugün TV channels to Roj TV, which is banned in Turkey for “spreading terrorist propaganda.”

“The parallel structure [Erdoğan’s epithet for the Gülen movement] which keeps speaking of the Turkish Republic’s new presidential palace in Beştepe cannot/does not say how they pay the costs of the huge 1,000-bedroom complex that the illegal structure uses as an epicenter in the US,” Sabah said on Monday as part of the ongoing campaign to restore Erdoğan’s tarnished reputation. “1,000 bedrooms” is a famous phrase used to describe Erdoğan’s own palace.

Sabah also said the residence has a parking lot that could take at least 500 cars. A reporter with Today’s Zaman counted as many as 20 cars in an almost filled parking lot on Sunday, a day when visitors come to listen to Gülen’s famous “Bamteli” Sunday talks. The talks are streamed through his website. Even Sabah’s own photos showed the small parking lot with only 10 cars parked at that time.

Sabah also seems intent on downplaying the monthly bills of Erdoğan’s palace, officially TL 20 million ($8 million). Sabah claimed at least $100,000 is spent daily for food and personnel in Gülen’s compound in Saylorsburg. Polat described the claim as a “product of imagination” and called the figure “ludicrous.” He added that the foundation employs only 10 personnel and is a transparent organization inspected by officials, inviting the reporters to take a look at publicly accessible figures.

The government’s stress on the foundation’s premises in this Pennsylvania town is a sign that the ruling party’s image has been badly damaged by the debates over the lavish lifestyle of its officials. Görmez, who was under fire for driving a Mercedes worth TL 1 million, visited Gaza on Monday. Standing outside a building damaged by an Israeli air strike last summer and with a Palestinian kaffiyeh wrapped around his neck, Görmez pledged that Turkey would help rebuild destroyed mosques in Gaza.

Prime Minister Recep Tayyip Erdoğan is getting lonelier and this makes him more ill-tempered. There are two big risk areas for Erdoğan. One of them is the total war he declared against the Gülen movement for no apparent reason.

Parties in the Tweede Kamer – the lower house of Dutch parliament – are furious about statements the Turkish ambassador to the Netherlands made pressuring the Dutch government to help hunt down supporters of the Gulen-movement. Numerous parliamentarians expressed their annoyance to NU.nl.