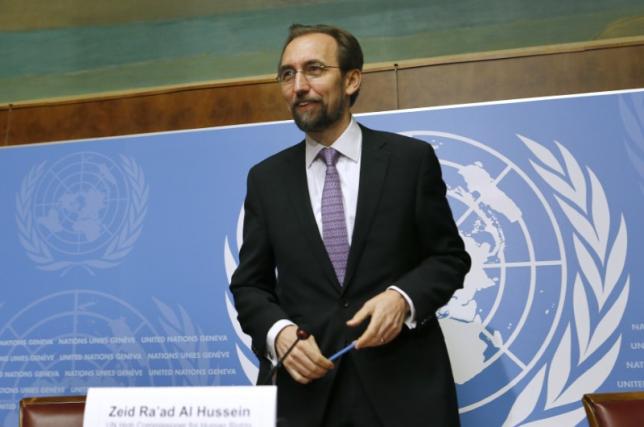 Zeid Ra’ad al-Hussein told a news conference in Geneva that Ankara had to respond to violent attacks but must not violate human rights while doing so.

Turkey expelled more than 3,900 people from the civil service and military as threats to national security on Saturday, in the second major purge since President Tayyip Erdogan won sweeping new powers in a referendum last month.

Last Wednesday, more than 9,000 police were suspended and another 1,000 detained for alleged links to the network of the U.S.-based cleric Fethullah Gulen, whom Ankara blames for a coup attempt last July. He has denied any involvement.

Erdogan has repeatedly said his government does not limit freedom of speech and that security measures are necessary given the gravity of the threats facing Turkey.

“With such a large number, it is highly unlikely that the suspensions and detentions will have met due process standards,” Zeid told journalists.

“Yes, the terror attacks need to be tackled but not at expense of human rights,” he said.

“And I’m very concerned about the renewed state of emergency which was undertaken in mid-April and the climate of fear in the country,” he added.

In all, some 120,000 people have been suspended or sacked from their jobs and more than 40,000 arrested in the aftermath of the failed putsch, which killed 240 people, mostly civilians.

Large numbers of journalists have been detained in Turkey, Zeid said.

“Journalism is not a crime in Turkey, it’s an issue which we believe the government must pay deeper attention to,” he said.

There are 151 journalists in jail in Turkey, according to the International Press Institute, which calls the country the world’s leading jailer of journalists. The majority of those were detained in the crackdown that followed the failed July coup, the institute said.

The Vienna-based institute says that government pressure on the judicial system has compromised the separation of powers and the rule of law, leaving Turkish journalists unable to effectively defend themselves in court.

(Reporting by Stephanie Nebehay in Geneva and David Dolan in Istanbul; Editing by Tom Heneghan)