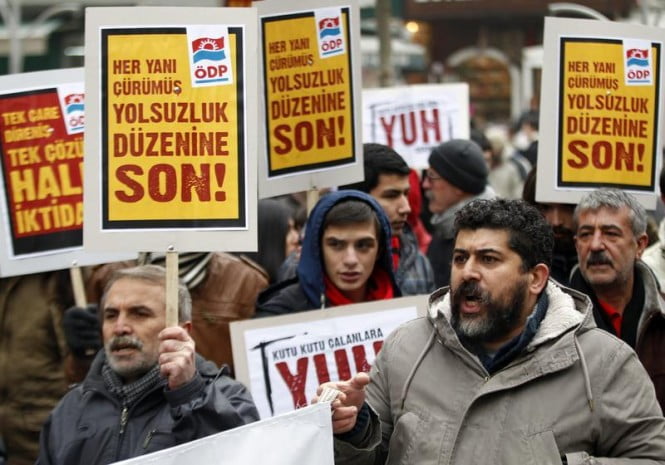 Thousands took to the streets of İstanbul on Sunday to protest against the government over a corruption scandal that has led to multiple arrests, including sons of two ministers and general manager of the state-run Halkbank.

Twenty-four people, including the sons of two ministers and the head of state-owned Halkbank, have been formally charged in connection with the corruption inquiry that Erdoğan has called a “dirty operation” to undermine his rule.

In response, Erdoğan has sacked or moved to different posts about 70 police officers, including the powerful head of İstanbul’s force, in a widening crackdown on the force that launched the investigation.

Erdoğan drew thousands of cheering supporters when he toured the north of the country on Sunday.

But in İstanbul, anti-government demonstrators flooded into Kadikoy Square, where a protest against government urbanisation plans had been scheduled to take place, before they were largely dispersed by police firing teargas and water cannon.

As in the case of the summer protests, the fiercest since he came to power in 2002, Erdoğan has pointed to foreign hands in the crisis.

“They are setting wicked and dark traps in our country, using their local pawns to disrupt Turkey’s unity and integrity,” Erdoğan said in the Black Sea city of Giresun on Sunday.

The Economy Minister and Interior Minister, whose sons were among the 16 arrested on Saturday, echoed Erdoğan on Sunday, saying via Twitter and the media that the allegations were part of ‘big trap’.

Witnesses estimated the crowd in Kadikoy Square grew to as much as 10,000 at one point.

“This gang of thieves cannot be ruling this country. The government should resign and all the dirty hands must be tried,” said Pelin Demirci, 26, who carried a banner that read “AKP get your dirty hands off our pockets.”

The prime minister has said the crackdown on people behind the corruption investigation would continue.

“Those who cast slurs on my ministers to reach their dirty goals, you should know that this nation will spoil the game. We will break those hands if they are trying to set traps in this country,” Erdoğan said on Sunday.

Those who attended Sunday’s protest in İstanbul appeared more concerned with the issue of corruption than the Gulen-Erdoğan split.

“The people are not interested in the power struggle between Erdoğan and Hizmet. The most important thing is to catch the thieves and put them in front of justice,” said Kadir Çekiç, 26, an engineer who works in the auto industry.

“I believe neither of them are innocent anyway, but for AK Party’s electorate to wake up and see some of the realities, these operations are very helpful.”