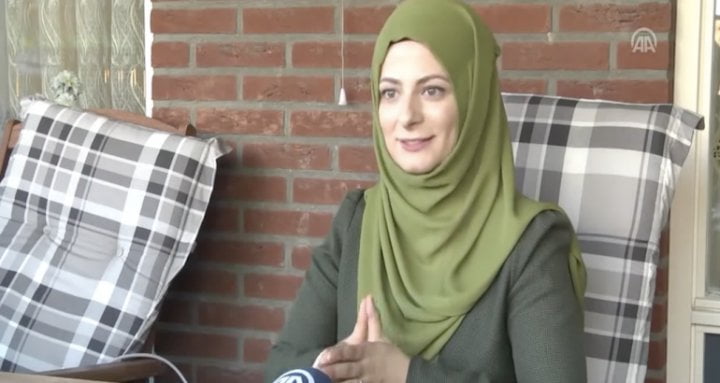 It was reported that Turkish lawyer Şükran İnce has became the chairperson of the Aid to Turkish Families Commission which was established in the aftermath the controversial coup attempt on July 15, 2016 in Turkey. İnce reportedly played an active role especially to discourage Turkish families to send their children to the schools operated by Turkish businessmen allegedly affiliated with the Gülen movement.

It was reported by pro-government Turkish media that she played a dominant role in removal of 459 students studying in schools associated with the movement in the Netherlands. However, she was dismissed from her government job by the Dutch government because of a photo she shared with Turkish Islamist President Recep Tayyip Erdoğan and her ongoing role in massive witch hunt campaign targeting alleged members of the Gülen movement.

Pro-government Turkish-Islamist daily Milat pointed to an article published in Dutch newspaper De Volkskrant on July 3, 2016, with the headline “This is the lawyer behind the evacuation of the Gülen schools,” which described İnce as a person in whom Erdoğan had trust and who was engaging in a smear campaign against Gülen schools.’’

The same paper on Sept. 15, 2016 accused İnce, who spoke numbers of time to Turkey’s state-run TRT and Anadolu news agency against the Gülen movement to smear them, of provoking Turks against Gülen sympathisers. İnce has since lost her job, Milat reported.

The Netherlands-Turkey relations took a turn for the worse in March of 2017 when Turkish efforts to hold political rallies on Dutch territory caused a stir, leading Dutch authorities to place travel restrictions on Turkish officials looking to campaign on the Turkish constitutional referendum.

During a Turkish referendum campaign in 2017 to amend the constitution and change the system of governance from a parliamentary to a presidential system, the Netherlands refused to allow Turkish Foreign Minister Mevlüt Çavuşoğlu’s plane to land in the country. Family and Social Policy Minister Fatma Betül Sayan Kaya in response went from Germany to Rotterdam by car to hold a rally and was declared persona non grata and escorted by police out of the Netherlands.

There are around 400,000 Turkish citizens living in the Netherlands.

The Stockholm Center for Freedom (SCF) has released a report on February 27, 2017 titled “Erdoğan’s Long Arm in Europe: The Case of the Netherlands” and exposed Turkish government profiling, harassment activities in Netherlands which led to physical assaults and arson attempts against Turkish President’s critics.

The Turkish government sees Fethullah Gülen as Turkey’s autocratic President Recep Tayyip Erdoğan’s main rival and blames the cleric for the failed coup. Gülen (a.k.a. Hizmet) movement is inspired by the US-based Turkish Muslim intellectual Fethullah Gülen who has been advocating science education, interfaith and intercultural dialogue and community contribution.

Gülen has been a vocal critic of Turkish government and autocratic President Erdoğan on massive corruption in the government as well as Turkey’s aiding and abetting of radical groups in Syria. Erdoğan launched an unprecedented persecution against Gülen and his followers in December 2013 right after major corruption probe that incriminated Erdoğan’s family members.

HASAN FATIH TÜRK, ROME Lawmakers, ambassadors, diplomats, academics and people from different walks of life came together for a friendship dinner in Rome on Thursday where they voiced their appreciation for the Hizmet movement and the values it promotes. The dinner, which brought together more than 200 people from different cultures, countries and professions, was […]