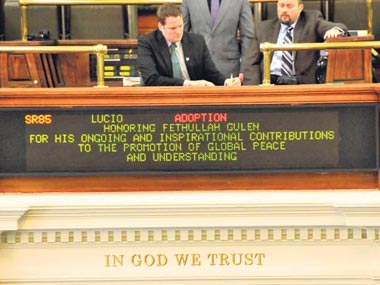 The Texas resolution states, “The Senate of the State of Texas is pleased to recognize Fethullah Gülen for his ongoing and inspirational contributions to the promotion of global peace and understanding.”

The senate of the US state of Texas on Tuesday passed a resolution commending respected Turkish scholar Fethullah Gülen for his contributions to the promotion of global peace and understanding.

Senate Resolution No. 85, which was approved during Tuesday’s session chaired by Texas Lt. Governor David Dewhurst, said, “The Senate of the State of Texas is pleased to recognize Fethullah Gülen for his ongoing and inspirational contributions to the promotion of global peace and understanding.” The resolution said Turkish scholar, author, poet, preacher and educational activist Fethullah Gülen has inspired a worldwide social movement that promotes humanistic values and service, known as the Hizmet movement, or the Gülen movement.

“Based on the principle that each human being is of value, regardless of background, faith or culture, the Gülen movement offers a multifaceted approach to seeking world peace.

It also places a strong emphasis on intercultural understanding and the embracing of differences; it values compassionate acts of care and concern; and it promotes the importance of education in laying the groundwork for fostering better relationships between diverse populations,” read the approved resolution.

The senate recognized that the Gülen movement emphasizes the core concept that peace is a function of tolerance and dialogue and it offers “Living to let others live” as the foundation of a life of altruistic service and calls on the younger generation to combine intellectual enlightenment with spirituality to make the world a better place.

Noting that the strength of the universal values promoted by the movement has led to the creation of the Gülen Institute at the University of Houston, which promotes academic research as well as grassroots activity as a means to bring about positive social change, the resolution said, “Gülen and the movement for social justice he inspired are truly deserving of recognition for their impact on our global society.”

“Now, therefore, be it resolved that the Senate of the State of Texas, 82nd Legislature, hereby commend Fethullah Gülen for his dedication to working toward a better world through education, service, tolerance and the free exchange of ideas and extend to him best wishes for continued success in all his endeavors,” the senate resolved.

Gülen, a Turkish Islamic scholar well known for teachings that promote mutual understanding and tolerance between cultures, resides in the US. Gülen has pioneered educational activities in a number of countries, along with efforts to promote intercultural and interfaith activities around the world. One of the world’s most influential Islamic scholars, Gülen made the top of the list of “The World’s Top 20 Public Intellectuals” by the magazines Foreign Policy and Prospect in 2008.