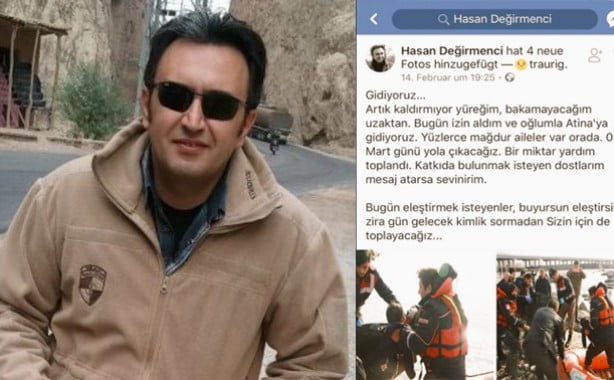 A 43-year-old Turkish man has died of heart attack while on a charity trip for Turkish asylum claimants in Greece.

“We are going [to Greece]. My heart could not bear this agony. I could not watch this agony from afar. Today, I have gotten permission from my employer, and I am going to Athens with my son. Hundreds of victims are there. We are set to go on March 3. Some aid was collected. I would appreciate it if my friends who want to contribute would send me a message,” Hasan Degirmenci said on his Facebook account on Feb 14.

Degirmenci and his son, Ensar, hit the road from Germany’s Stuttgart to Athens along with a group of businessmen on Saturday.

A day after, he suffered a heart attack at the house of a Turkish [refugee] family in Athens and was subsequently taken to a nearby hospital where he later died.

Thousands of people have fled Turkey due to a massive witch-hunt launched by the Justice and Development Party (AK Party) government against sympathizers of the Gülen movement in the wake of a failed coup attempt on July 15. The government accuses the movement of masterminding the coup while the latter denies involvement.

Earlier in February, at least three people died and four others were missing after a boat carrying a group of eight Turkish refugee seekers capsized in the Maritza river between Greece and Turkey.

Degirmenci’s last Facebook post had pictures of the three people whose bodies were recovered from the river.