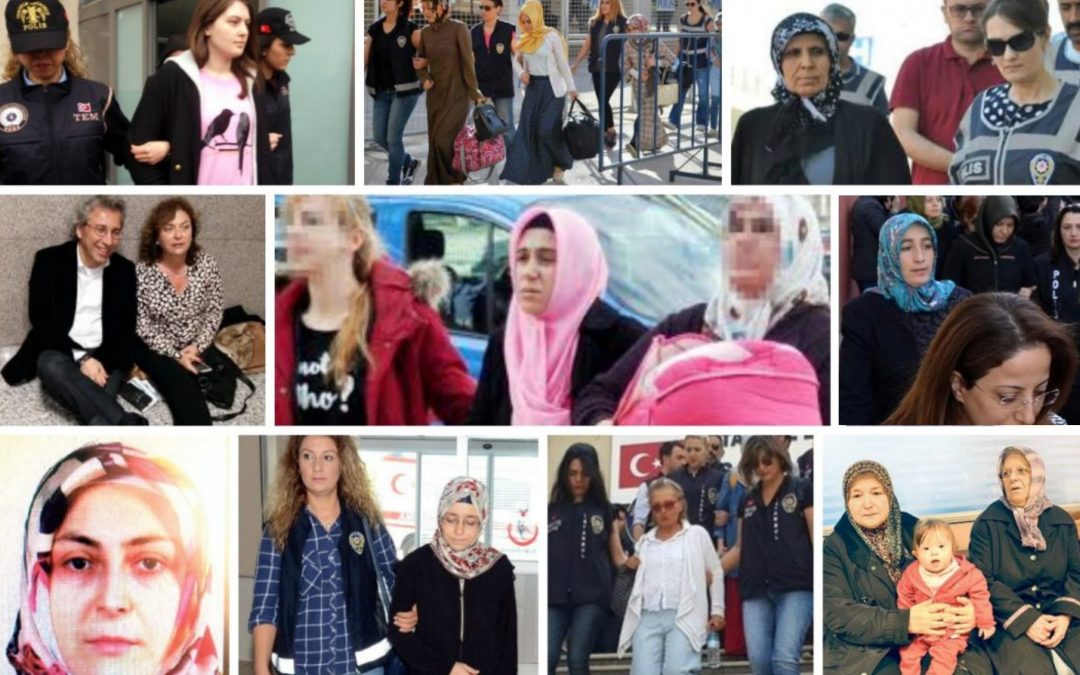 17,000 women along with some 700 babies are in prisons across Turkey. A number increased in recent months, in the wake of a repression campaign launched by the Erdogan regime.

Since the attempted coup of July 15, 2016 the Government of Turkey has engaged in illegal extraterritorial and extrajudicial actions been taking strict measures to silence dissidents in other countries from various ideologies recently.

Participants of Gulen Movement -known also as Hizmet Movement- have been the main target of this global witch-hunt and abductions.

Advocates of Silenced Turkey (AST), a Virgina based Human Rights Organizations reports that ‘even though actions of the Turkish government against dissidents including the Gulen Movement are not appreciated by many countries around the world, there are some states who are in cooperation with Turkey neglecting human rights and fundamental freedoms.’

In a 13 pages’ extensive report, AST documents most of the illegal extraterritorial and extrajudicial actions targeting the participants of Gulen Movement conducted by the Turkish Government with the alliance of local authorities and gang groups. The report also notes that study only contains sample stories of people who could reach out to media and whose voices could be heard by the international community.

‘There might be many more people living through similar things who are not mentioned here in this report.’ The report recalls.

The most recent news reports on illegal detention of the Hizmet participants came from Afghanistan. As appeared largely in the media, Afghanistan Intelligence Agency detained Turkish teachers Önder Akkuşcu, Yunus Demirci, Yılmaz Aytan, Businessman Sami Yavuz and an Afghani teacher Massod Wardak who have been working legally for Turkish schools in the country. While there was no legal basis for the detentions, sources reported that the demand for illegal detentions came from Erdogan Government.

While Afghani Intelligence Agency stated that the three of the teachers were released, two are still held in home confinement the AST reports.

The first story extensively explained in the report comes from Sudan.

Memduh Cikmaz, a factory owner in Sudan was wanted by Erdogan Government for almost two years and Sudanese authorities informed him that there was no problem regarding his factory as well as his stay in Sudan. However, Mr. Cikmaz was detained in a joint operation by Sudanese and Turkish police. His demand to meet with his lawyer was rejected. Since his illegal deportation to Turkey, his family has not heard anything about his health.

Sudan is considered one of the most corrupt nations in the world. On Transparency International’s 2011 Corruption Perceptions Index, Sudan ranked 177th out of 183 countries. In 2011 Freedom House named Sudan as one of the worst nations for human rights.

The second story comes from Kazakhstan.

Enver Kilic and Zabit Kisi, two Turkish nationals linked to Gulen movement were abducted from a plane in Kazakhstan by an unknown group of people. According to the report, on 16 September 2017, both were not allowed to get on the plane because their passports were allegedly cancelled. They had a court hearing in two weeks on 30 September 2017. Ms. Kilic and Ms. Kisi wrote on social media that they cannot get any news from their husbands since 30 September 2017. Two men were reported to be deported to Turkey and since then remains under custody in Turkey. Nevertheless, there have not been any up-to-date information about them and their condition, their families are justifiably afraid of the possibility of torture. It must be noted that Kazakhstan has been party to the 1951 Refugee Convention, meaning that the country presumably violated the principle of non-refoulement prescribed in the Convention.

According to the report, Mesut Kacmaz and his family, including his two daughters, were abducted in Pakistan on 27 September 2017. Mr. Kacmaz was an educator at a chain of 28 PakTurk Foundation schools that were allegedly linked to the Hizmet Movement.

According to the Human Rights Commission of Pakistan, the family was taken by 20 armed people in plain clothes. A neighbor and a fellow friend of the family stated the family was restrained, blindfolded and hustled into unmarked pickup trucks in Lahore. Pakistani police officers stated that they had no information regarding the family which directs suspicions to intelligence agencies. Human Rights Watch highlighted that Kacmaz family was under the protection of the UNHCR with a valid certificate until 24 November 2017, thus cannot be extradited. The Pakistani government’s lawyer assured that the family would not be deported as per the UNHCR asylum seeker certificate. However, on 14 October 2017 the family was handed over to Turkish intelligence operatives and deported to Turkey.

Another heart breaking story is from Georgia.

The Advocates of Silenced Turkey reports that ‘Mustafa Emre Cabuk, who has been living in Georgia since 2002, was detained on 24 May 2017 which was a day after Binali Yildirim, Turkish Prime Minister, visited his counterpart Georgian Prime Minister Giorgi Kvirikashvili. He was sent to prison by the Georgian court’s provisional detention decision for three months. Police officers came to take him from his home and said the operation was at the request of the Turkish government. After his arrest, his family urged Georgian authorities not to extradite him to Turkey as his basic human rights would likely to be violated there. Furthermore, Amnesty International called for an urgent action to be taken to prevent his deportation before it was too late and stated “He could be extradited any minute and in Turkey he could be at risk of torture or other ill-treatment, unfair trial or other serious human right violations.” Amnesty also remarked that Georgia was under obligation not to return Mr. Cabuk as per both international human rights law and its national legislation.

The fifth story is from Myanmar.

Similar to the previous individuals, the study reports, Mr. Sokmen was working in Myanmar at Horizon International Schools (allegedly linked to the Movement). Sokmen family, including his wife and two-years old daughter, was detained in Yangon at an airport.18 First, he was not allowed to board a plane and had a problem with Myanmarese immigration officers. In a video that was posted online, Mr. Sokmen said Turkish ambassador to Myanmar was pressuring local officers to seize the family’s passports. Human Rights Watch’s Deputy Asia Director Phil Robertson called Myanmar to provide protection to the family. Mr. Sokmen was reportedly arrested and sent to Thailand, he was taken into an immigration detention center to be deported to Turkey there. 20 After being held in detention for a day, he was extradited to Turkey where he was taken into custody and arrested again. 21 No further information could be received regarding his recent condition, but unfortunately it is highly likely that he would be facing ill-treatment.

A devastating story from Malaysia

AST reveals that Turgay Karaman and Ihsan Aslan (a teacher and a businessman) were reported missing to local police by their families who have been living in Malaysia for a long time. Mr. Karaman was on his way to a meeting with his lawyer when he was bundled into a car by four or five unknown plain clothed Malaysian men on 2 May 2017 as revealed by surveillance cameras in an underground car park. His wife and friends believed he was abducted to be returned to Turkey.

Likewise, Mr. Aslan has gone missing as well which was reported to the police by his wife on the same day as Mr. Karaman’s. Families of the two men went to the police and they found out eventually that both were detained “for activities that threaten the safety of Malaysia” as percounter-terrorism legislation. Mr. Karaman’s lawyer specified that neither his client nor Mr.Aslan were not involved with any violent activities. Fellow friends of both men indicated that they were not only worried for their friends but also for their own safety reminding the possibility that same thing would happen to them in the future. Similarly, within the same week, Ismet Ozcelik, former academic at the Mevlana University which was shut down by decree laws after the attempted coup, was abducted from his car. Similar to Kacmaz family in Pakistan,

Mr. Ozcelik held a refugee card by the UNHCR.

Tamer Tibik and Alettin Duman had gone through similar challenges in October 2016 as well.

Both were reported missing by their wives who have searched everywhere possible to find them including police stations and hospitals. Several days later it was understood they they were illegally detained and handed over to Turkish intelligence operatives. Mr. Tibik wrote in a letter to his wife that unknown men took him in Malaysia to a forest for interrogation using torture. What is worse, Mr. Duman’s mother learned from his son that the torture has not ended once they arrived Turkey but continued for weeks.

The report notes that due to the potential negative effects of the ‘Hakan Atilla Trial’ in NY which reveals Turkish Government’s involvement for breaching Iranian sanctions would potentially trigger Erdogan Government’s efforts to harshen its attitude even more against dissidents. Early signs of such assumptions have already started. The government announced its plans to build 228 new prisons in the next five years indicating that they are likely to arrest many more people. Both official and unofficial mouthpieces of Turkish Government claimed that Turkish Government will start assassinations against the leading figures and journalists linked to the Hizmet Movement.

What is common in all these countries mentioned above is that human rights violations and corruption have already been a pattern and part of the government culture. It is safe to analyze that Erdogan Government tends to infiltrate the government bodies of these countries bribing the local officials and politicians. Erdogan Government’s attempt to bribe General Mike Flynn, the National Security Advisor of Trump Administration still remains the biggest political scandal in the U.S.

In conclusion, AST urges foreign governments to take all the necessary steps to ensure safety to these people before it is too late. ‘Security officers must be aware of the potential risks. Officials working for the government abroad must be watched closely, they must be prevented if they are in preparation of any harm. Lastly, both individuals and organizations that are deemed to be Hizmet participants must be provided extra protection when there is an imminent risk targeting them.’ The report concludes.