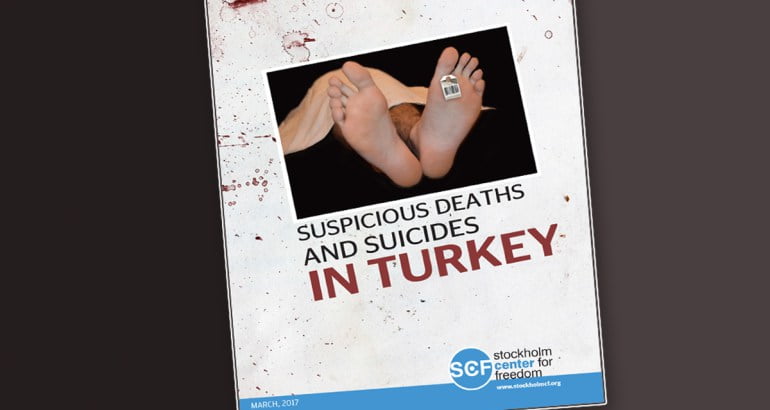 Against the background of massive crackdown on critics and opponents in Turkey and widespread torture practices in detentions and prisons, 54 people were reported to have lost their lives, most under suspicious circumstances and under lock-up in the last eight months, a report released by Stockholm Center for Freedom (SCF) has revealed.

“Turkish government is responsible for the lives and well-beings of the people who are imprisoned, yet we have seen an unprecedented spike in the reported suicide cases under the watch of authorities,” Abdullah Bozkurt, the President of SCF said.

“The suspicious deaths, described by authorities as suicides, has not only taken place in jails but also beyond the prison walls amid psychological pressure and threats of imminent imprisonment and torture following the release of suspects or before the detention,” he added.

It is difficult to obtain details of fatalities that occur in jails, detentions or other places because of the fact the Turkish government is not forthcoming with the information and that relatives are afraid of talking to investigators and reporters. Yet, SCF has identified 54 cases in less than a year, mostly from publicly available data by scouring news reports on print and online sources.

In some cases, deaths are believed to have taken place after severe torture suspects were subjected in Turkey’s prisons and detention centers. In several cases, suspects reportedly took their lives immediately before an imminent arrest or right after the release, raising suspicions of a foul play on the part of authorities. The psychological pressure by the government and trauma of being targeted as part of an unprecedented witch-hunt campaign targeting critics and dissidents in Turkey have also played a role in some reported suicide cases, many believe.

Just like so many cases of torture and ill-treatment of suspects in Turkey, widely reported by credible intergovernmental institutions including the United Nations and the Council of Europe as well as non-governmental organizations such as Amnesty International and Human Rights Watch, there has been no effective, independent and through investigation into these suspicious deaths.

SCF believes the true number of deaths under the extended emergency rule since July of last year in Turkey is still unknown. Moreover, it remains highly concerned over reports that the government runs secret and unofficial holding centers for some who were abducted with a total disregard to a due process.

SCF considers the information presented in this research is accurate to the best of its knowledge and declares that it remains open to make corrections, updates if further information becomes available.

Most of the companies taken over by the government also deny any role or connection to Gulen. But they’ve had their assets seized and employees fired. The economist Yesilada predicts the government will have to sell off these businesses. That’s likely to trigger lawsuits that could last years.