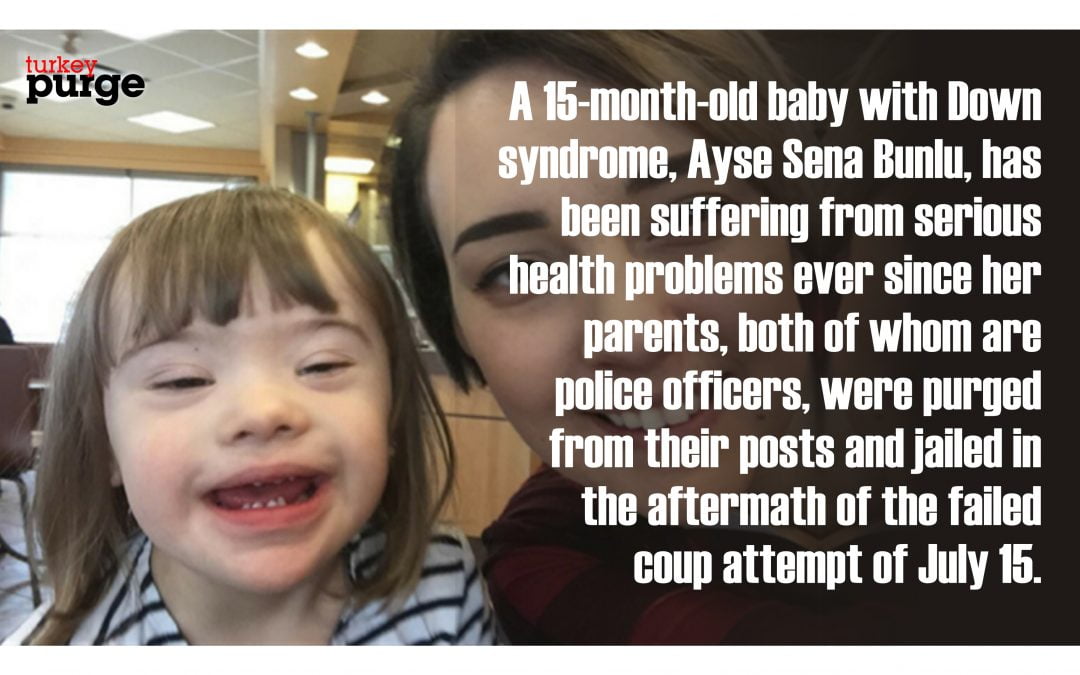 A 15-month-old baby with Down syndrome, Ayşe Sena Bunlu, has been suffering from serious health problems ever since her parents, both of whom are police officers, were purged from their posts and jailed in the aftermath of a failed coup attempt in Turkey on July 15, according to a story in the Tr724 news portal on Friday.

Bunlu’s father, a police chief in İstanbul’s Avcılar district, was immediately removed from his post and jailed following the coup attempt while mother Rukiye was purged and jailed last December.

Ayşe Sena’s grandparents have been taking care of the little girl since both of her parents are in jail.

Ayşe Sena’s grandmother Billur Yıldız has said the baby girl does not only suffer from the Down syndrome but also heart problems and they have been visiting emergency room almost every day since her parents’ imprisonment.

“We demand at least the release of the mother on judicial probation. We don’t say she is guilty or not, we just say she needs to be with her baby,” said Yıldız.

The grandmother also said Ayşe Sena needs to undergo physical therapy but getting a medical report for her to get this treatment is impossible in the absence of her parents.

“We don’t know what to do. We just want a solution to be found. We are taking care of her but can’t provide the love of a mother. Although she can’t normally utter a word, Ayşe Sena says, ‘mummy,’ while crying,” said Yıldız.

Over 135,000 people, including thousands within the military, have been purged due to their real or alleged connection to the Gülen movement since the coup attempt, according to a statement by the labor minister on Jan. 10.

As of March 23, 94,982 people were being held without charge, with an additional 47,128 in pre-trial detention due to their alleged links to the movement. A total of 7,317 academics were purged as well as 4,272 judges and prosecutors, who were dismissed due to alleged involvement in the July 15 coup attempt.

The government holds the Gülen movement responsible for the failed coup while the movement strongly denies the charge.

German police have removed the Gülen movement, which Ankara designates a terrorist organisation, from its ‘dangerous’ and ‘to be followed’ watch list, Sözcü newspaper reported, citing a domestic security report from the  country’s Southwestern state of Baden-Wuerttemberg.