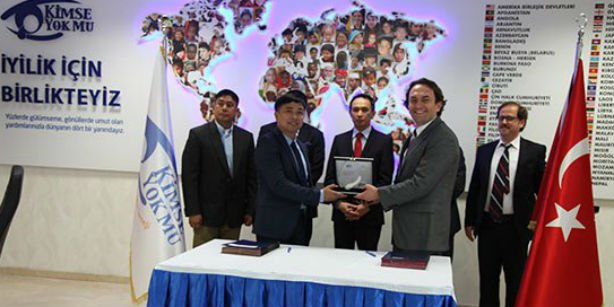 Kimse Yok Mu (KYM) has signed an agreement with the Philippine government on closer cooperation to further aid, education and development efforts in the two countries. (Photo: Cihan)

Turkish charity organization Kimse Yok Mu has signed a landmark agreement with the Philippine government, paving way for close cooperation between the two to further aid, education and development efforts in the two countries.

Earlier this month, the Philippine Army Civil Military Operations Command presented an “honor award” to Kimse Yok Mu for its aid activities and contributions to peace in the country.

Kimse Yok Mu received the award for the third time in the last three years for its food aid to people in need and for search and rescue efforts after Typhoon Haiyan, which hit the Philippines in 2013.

The Turkish charity was the first such organization from Turkey to send aid to the Philippines, which was struggling to recover after being hit by Typhoon Haiyan.

Kimse Yok Mu is the only aid organization in Turkey that holds UN Economic and Social Council (ECOSOC) special consultative status and it began to develop internationally recognized relief programs in partnership with the United Nations Human Rights Council (UNHRC) in 2013. It was also awarded the Turkish Grand National Assembly Outstanding Service Award in 2013.

Humanity continues to face problems ranging from hunger and poverty to armed conflicts and all forms of discrimination, but these realities should not lead us to a sense of despair, apathy and hopelessness since a growing number of individuals, families, communities, institutions and civil society organizations as well as government sectors and intergovernmental agencies are slowly and patiently planting the seeds and nurturing the seedlings for the building of a more peaceful world, a world with much less suffering, conflicts and destruction.