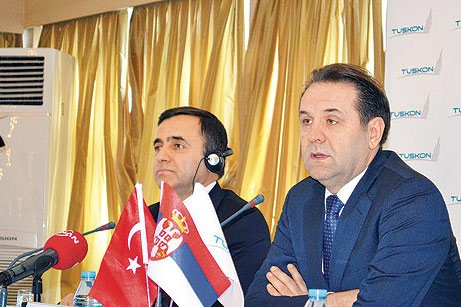 Serbian Deputy Prime Minister Rasim Ljajic visited TUSKON and attended the “Turkiye Serbia Trade and Investment Forum”. He said in his speech, “Businessmen from both Turkiye and Serbia have initiated talks on increasing economic relations between the two countries many times but that companies need to achieve results to bring business ties to the desired level, especially in the agriculture sector”.

“Privatization efforts in the country pose opportunities for investors. The agriculture sector is a major one for the Serbian economy as it makes up 17 percent of the economy. In order to expand the industry, new investments are needed and we could join forces with Turkish businessmen to reach to this goal.”

Ljajic, who is also the minister of foreign and home trade and telecommunications, was speaking at a business forum in İstanbul and remarked that bilateral trade relations, which were crowned with a free trade agreement in 2009, are not at the desired level considering the rich cultural and historical ties between the countries. “We are still not there yet with a trade volume of $600 million, which makes Turkey Serbia’s 17th trading partner. We have better economic relations with Germany, Italy and Slovenia,” he commented.

Stating that 600 Italian, 400 German and over 400 Slovenian businesses are operating in Serbia, Ljajic said the 30 Turkish businesses which currently have operations in the country is not adequate and that more Turkish businesses need to be seen in Serbia. “The high number of foreign businesses from these countries is the best reference for an ideal business environment of Serbia. However, I believe the reason behind the low number of Turkish businesses in Serbia is that we were not able to introduce our potential well enough.”

In addition, he highlighted that Serbia has the largest economy in the Balkans region and that in the near future the country is determined to become a member of the European Union, which would open a huge market for Turkish investors in Serbia. Furthermore, the government provides support to investors in terms of tax deductions and extends subsidies from between 4 and 10 million euros when establishing businesses within the country particularly in the textile, machinery and agriculture industries, in addition to the automotive industry, which could benefit both sides.

South African and Turkish companies that were present to build one on one business ties at the Turkey South Africa Trade and Investment Forum on Tuesday expressed that their main aim is to expand their businesses on the continent with partnership from both sides.