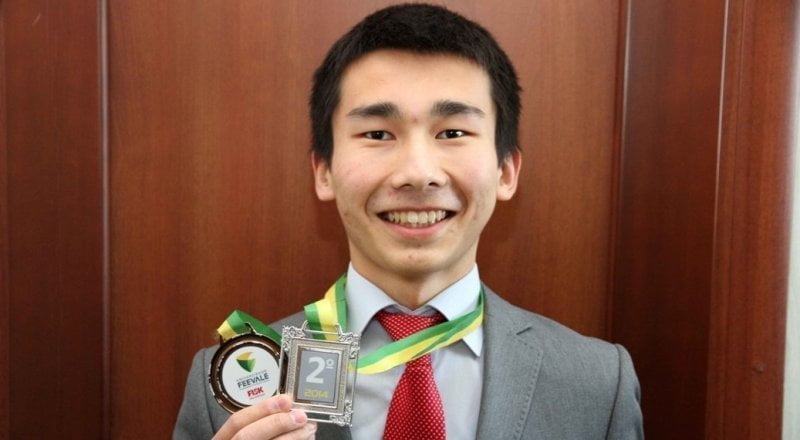 The student of Atyrau-based Kazakh-Turkish Lyceum went for the creative research competition in the city of Novo Hamburgo between 27 and 31 October. More than 1200 students from 28 different countries participated in the event. Of them, 44 students represented Kazakhstan.

All the projects were presented in either Portuguese or English. Talgat presented his research into trademark of Mercedes-Benz concern in English. The aim of the project was to study the location of trademark’s points on the sphere so that the sum of the distances between the consecutive selected points was extreme.

“I have studied the history of Mercedes trademark and found that the three lines on their mark mean they are the first on the land, on the water and in the sky,” Yegizbayev said.

“This is all described in the book “Problems of Thomson”. Together with my teacher we packaged this information in a more accessible form. My whole project took about a year. I prepared it with one of the teachers – professor of the Kazakh-Turkish Lyceum in Astana. We mostly talked via Skype, and in the summer I went to Astana to work together. I had to work long hours in the library,” the student said.

The jury praised the work of the Kazakh schoolboy and awarded him a silver medal.

Besides scientific awards, the Kazakh delegation also won a sports award. A football tournament was held between representatives of the participating countries. Kazakhstan put forward two teams, one of which won the tournament, while the other took the third place. The second place went to Brazilians. Talgat played for one of the Kazakh team as a midfielder.