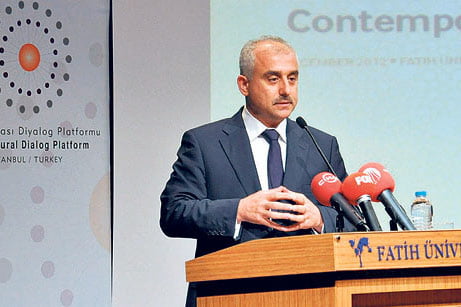 The subject of misconceptions of Islam dominated the debates at the international conference organized by the Foundation of Journalists and Authors (GYV) and Fatih University in İstanbul today.

The event, titled “The Practice of Coexistence in Islamic Civilization and Contemporary Interpretations,” started on Friday with the participation of international scholars and leading opinion-makers as well as deputies from Turkey’s Parliament.

Tahir Mahmood, head of the Institute of Advanced Law at Amity University in India, said “Islam is absolutely the most misconceived religion, with a lot of incorrect stereotypes.” Which, according to Mahmood, is why “we should let the world know that Islam is not what the others claim it is.” Urging the world to get the message that ¨Islam is a religion of peace and coexistence,” Mahmood suggested that “maybe this time the world would listen to our message, given from the most secular Muslim country in the world,” referring to Turkey.

Mahmood added that in the Islamic faith both Jesus and Moses have divine status, and even an ordinary Muslim would not even think of disrespecting them. “Very unfortunately,” Mahmood continued, “Others disrespect Prophet Mohammed, who said in his farewell address in Arafat that all human beings are the children of Adam,” considered by the academic as a message of coexistence.

GYV President Mustafa Yeşil said during the conference that peace is the basic expectation and need of humans. Speaking of the Abant meetings, sponsored yearly by the GYV with the goal of promoting dialogue and removing biases in Turkish society, He emphasized that “in the first years of the Abant meetings, the atmosphere was hostile with the impact of mutual biases. Now, in their 28th year, the meetings have become a basis for accepting the other as well as love and understanding.”

Mohamed El Fatah Naciri, the representative of the Arab League in Turkey, also touched upon misconceptions of Islam. “Two centuries after the expansion of Islam, only 10 percent of the population of Syria, Iraq, Iran and Egypt had converted, which shows that the allegations that people were forced to convert were incorrect,” said the ambassador.  He also underlined that “As an Abrahamic religion, Islam has no problem with other religions” and referred to “a very large literature of coexistence in Islam,” such as the first government of Islam in Medina.

Emphasizing that Islam is a religion of tolerance, Naciri argued that “extremists do not represent Islam,” reminding Muslims of their responsibility to think of how to “get out of their identity crisis in relation to the modern world.” Referring to the great contributions of Muslim civilization to the world by means of examples from the peaceful coexistence of cultures in the Spanish region of Andalusia, Naciri called on Muslims to criticize each other for their shortcomings, but with love. He also pointed out that, today, “coexistence is also a problem among Muslims,” despite good examples from the past.

The president of Fatih University, Professor Şerif Ali Tekalan, on the other hand, said, “Although these lands have displayed good examples of coexistence for centuries, now there is a need to update and upgrade the concept of coexistence.” Tekalan gave his university as an example of coexistence, with its “1300 students from over 100 countries.” Similarly, Yeşil emphasized the importance of developing projects similar to the GYV conference while underlining that “these lands [modern day Turkey] hosted different cultures at the same time for 700 years.” In accordance with the other speakers, Mahmood echoed that “Turkey is one of the glorious examples of living together, and can provide a message of coexistence to the world.”

Referring to the human tragedies taking place in Turkey’s neighboring Syria, Tekalan said: “It is a pity that humanity was not able to achieve more progress. People are still act as homo homini lupus.” According to Tekalan, “Today we need to learn to live together, because in an ever-globalizing world, everyone is in touch with everyone else.¨

Rejection the idea that this world is not enough for growing populations, Tekalan commented, “If there were a just distribution of resources, the opportunities that the world offers us would be enough for everyone.” He concluded his remarks with emphasis on the importance of international gatherings to “voice the message of coexistence” and urged everyone to “think what we can do to prevent killing of one more person in this world.”

Mahmood pointed out the emphasis in several versus of the Quran on religious diversity, highlighting that “the verse which says that there in no compulsion in religion is a message of coexistence.” Referring to the multi-religious nature of his home country, India, Mahmood said, “Despite many common points in different religions, for some reason people focus on differences.”

Speaking about the divisive impact of rising nationalism during the Ottoman Empire, Naciri called people to “revisit history,” reminding the participants of the story of Sultan Mehmet II. In an effort to underline the insignificance of ethnicity in Islam, Naciri pointed out that the Mehmet II was praised by the Prophet Muhammad for conquering İstanbul, despite the fact that he was not an Arab.

The conference will continue with seminars on Saturday at Fatih University’s Büyükçekmece campus.