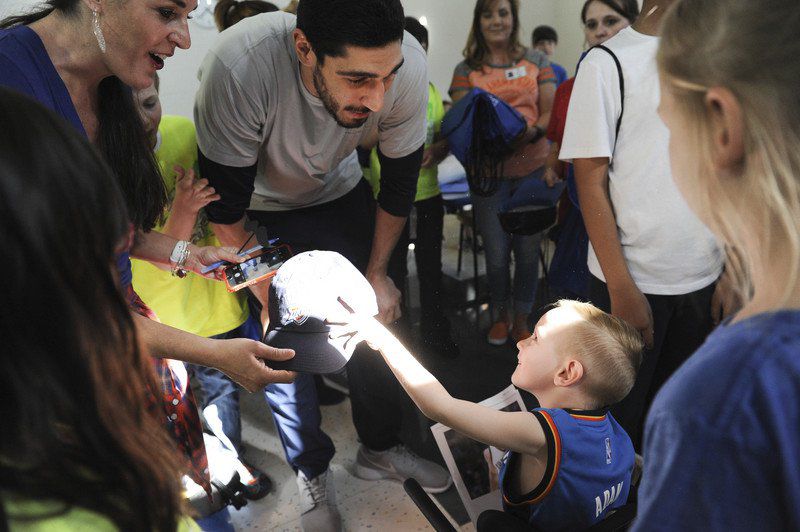 Kyle Phillips / The Transcript. Oklahoma City Thunder’s Enes Kanter gives Henry Hale a hat earlier this year during his visit at the J.D. McCarty Center. Kanter, an outspoken critic of the current Turkish government, has been facing increasing pressure from Turkey to stop talking. His passport has been canceled, a warrant for his arrest has been issued, and his father was arrested this morning.

When Oklahoma City Thunder center Enes Kanter found out his father, Mehmet, had been arrested by Turkish authorities, he was, of course, devastated. After all, the Turkish native has been an outspoken critic of Turkey’s president, Recep Tayyip Erdoğan, whose government recently canceled Kanter’s passport and issued a warrant for his arrest. Now, it appears Erdoğan’s attempts to silence the OKC big man have extended to his immediate family.

“My brother, the one in America, told me that the police came to our house in Istanbul and they raided the house,” he said. “They took some computers and phones away, and then, at the end of the search, they took my dad away.”

In a public statement following last year’s coup attempt, which Erdoğan blames on former Imam and scholar Fethullah Gülen, Kanter’s family disowned him. Now Kanter is saying that statement was a political move on his family’s behalf to protect themselves from retribution for Kanter’s outspoken views and his support of Gülen.

“They had to,” he said. “This would have happened a year ago if they hadn’t released that statement.”

Kanter isn’t sure if his father is safe, or if he’ll be thrown in jail. He said the Turkish government hasn’t released a reason for Mehmet’s arrest.

“I can’t contact [my family], because they took all the phones and computers. But even if I could, [the government] would be listening, and they know if I’m communicating with my mom — it doesn’t matter how old she is — they will still put her in jail,” Kanter said. “My father is going to be interrogated Monday.”

But that doesn’t mean Kanter intends to stop talking about Erdoğan, whose actions following a coup attempt in July of 2016 have resulted in the imprisonment and internal displacement of hundreds of thousands of Turks, according to Amnesty International and the Human Rights Watch. Erdoğan’s government has shuttered the independent media as Erdoğan consolidates power.

Kanter said journalists have been arrested, schools have been shutdown, women are being raped and anyone who speaks out against Erdoğan is jailed. He said he feels safe in America, but anywhere else he would run the risk of being kidnaped and murdered.

“I’m safe where I am right now,” he said. “[The Turkish government] doesn’t want to look bad to the American government. If I was anywhere else in the world, my life would be in danger.”

Erdoğan visited the White House in mid-May, a visit that was overshadowed by video of his security detail assaulting protestors outside of the Turkish embassy. Turkey’s attempts to force Kanter to return home began shortly afterward. On May 20, they canceled his passport as he flew from Indonesia to Romania, and on May 26 they issued an arrest warrant, claiming Kanter is a terrorist.

“When I got back to America, I went on all the shows and told people what’s really going on in Turkey, and they got really, really mad,” Kanter said. “That’s why they tried to hurt me. There’s thousands more people out there that they cannot reach because they’re out of the country, so they’re arresting their families and wives and putting them in jail. They’re saying ‘Hey, if you come back, we’re going to let your family go.’ They’re doing the same thing to me.”

The support for Kanter is coming from everywhere: Thunder staff and players, regular fans, and even women with marriage proposals to cement Kanter’s immigration status.