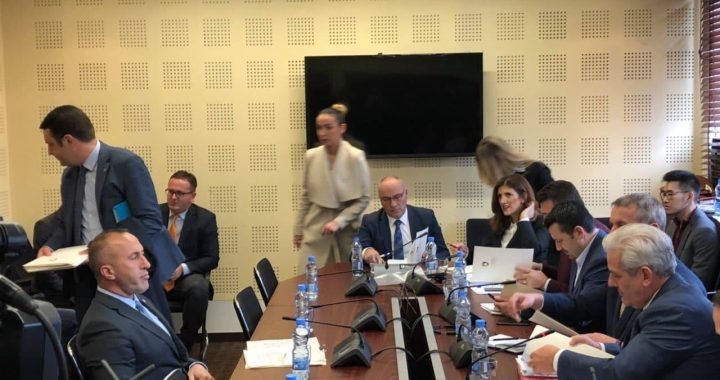 Kosovo Prime Minister Ramush Haradinaj being questioned by the Parliamentary Commission for the deportation of six Turkish citizens. Photo: Kallxo.com.

Following an invitation by the Parliamentary Commission for Investigating the Deportation of Six Turkish Citizens in March 2018, Kosovo Prime Minister Ramush Haradinaj said that the action was “hasty and surprising,” and that it could have been carried out as “a regular process.”

Haradinaj said that the Kosovo Police thought it was doing a “patriotic act” when carrying out orders to deport the Turkish citizens, saying that he could have dismissed former police chief Shpend Maxhuni, but he did not see him as responsible.

“Politically, I could have discharged Maxhuni, as a political act in discretion. Regardless, I was focused on the two individuals in the hierarchy,” Haradinaj said, referring to the dismissal of former Interior Minister Flamur Sefaj and former Chief of the Kosovo Intelligence Agency, AKI, Driton Gashi shortly after the deportation.

A few months after the dismissal of Gashi, Maxhuni was appointed as the new chief of AKI.

“The police executed [the act], the police believed it was doing a patriotic and heroic act for the benefit of the country. We cannot go to the police and tell them that it is their fault,” Haradinaj said.

During his report, Haradinaj said that a foreign diplomat, who he was having a meeting with during the events related to the deportations, informed him that the Turkish citizens were removed from the country.

He said that he received the information “around 11:00 or 12:00” in the day of deportation, while the aircraft carrying the Turkish citizens left Prishtina Airport before 11:00 am.

The commission planned to interview President of Kosovo Hashim Thaci as well, but its report was postponed for next week as Thaci is currently on an official trip in the United States of America.

Following the deportations, the Ministry of Internal Affairs of Kosovo issued a press release saying that the five Turkish employees of Mehmet Akif schools in Kosovo were stripped of their residence permits due to reasons of “national security.”

In an interview following the publication of the Ombudsperson report on the forceful removal of six Turkish nationals, Hilmi Jashari, Kosovo Ombudsperson, said that “from the first step to the last moment” the entire process was a violation of legal obligations proscribed in the Kosovo Constitution and the European Convention of Human Rights.

The airline company, whose plane carried the six Turkish nationals who were forcefully removed from Kosovo to Turkey in March, misrepresented its flight’s purpose, being labelled as a “commercial flight” according to the Kosovo Civil Aviation Authority.

On March 29, six Turkish nationals were deported from Kosovo to Turkey after a joint operation of the Kosovo Intelligence Agency, AKI, and the Kosovo Police. According to the Ministry of Interior, the deportees represented a threat to national security and were deported to their country of citizenship where they face charges for being members of the Fethullah Gulen movement, which Turkey considers a terrorist organization.

Ali Özer, a 48-year-old doctor who was jailed due to his alleged links to the faith-based Gülen movement, has died of a heart attack in Çorum Prison. This is 57th such suspicious death or suicide since last summer’s so-called coup attempt against Erdogan regime.