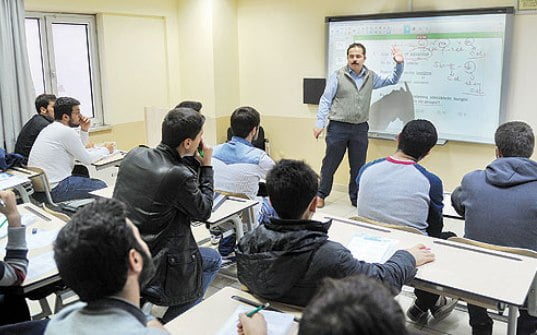 The Ministry of Education profiled students and teachers of dershanes and schools that are close to the faith-based Hizmet movement inspired by Turkish scholar Fethullah Gülen through a questionnaire distributed by education inspectors to those institutions in 2012, according to recently revealed petitions by students and parents to the ministry.

The petitions filed with the Ministry of Education and provincial educational branches in May 2012 by parents have revealed that the Education Ministry profiled students of dershanes — private institutes that offer examination prep classes — and schools close to the Hizmet movement via a questionnaire given to students of FEM, Körfez, Maltepe and Anafen prep schools.

The ministry allegedly gave an order in 2012 to all provincial educational branches across the country for educational inspectors to distribute the questionnaires to students in dershanes to fill out. Although this questionnaire was done in all dershanes, questions in dershanes close to the movement were different from those asked in other dershanes.

The questionnaire distributed in Hizmet-linked dershanes included questions such as whether the students were encouraged to attend those dershanes by teachers or school managers. The questionnaire even asked students to write down the names of teachers and school managers if they had encouraged them to attend Hizmet-linked prep courses, enabling the ministry to determine teachers and principals who are linked to the Hizmet movement.

In their petitions, parents requested the ministry to explain why there were different questions asked in the Hizmet-linked dershanes from those asked in other dershanes. The parents also wanted to know what would be done with the information collected from their children via the questionnaire in the future.

One parent wrote in a petition that they were not even exposed to this kind of profiling treatment during the Feb. 28, 1997 postmodern period.

One parent of an eighth-grade student states in the petition she wrote in 2012 to the Education Ministry: “My son told me that an inspector came to their school and distributed forms to the students. However, different questions were asked to students attending the Kocatepe prep school, which is also my son’s dershane. The students were asked to write their ID number, the names of dershane teachers and several other questions asking the link between their schools and dershanes that the students are attending. Is this not a profiling practice? We are very concerned and anxious as parents.”

Another parent, H.G., who also filed a petition with the ministry, stated that her child was negatively affected by the ministry’s questionnaire. In her petition she stated: “We are very concerned. Is this not profiling you [the ministry] are doing?”

A. İ., another parent who filed a petition, stated that the educational inspectors distributed different questions to students attending Hizmet-linked dershanes. “This practice reminded us of the Feb. 28 period. We are requesting that you [the ministry] destroy the data collected via the questionnaire.” A.İ. wrote in his petition.

F.M., a high school student who filed a petition with the Ankara Governor’s Office regarding the questionnaire, stated: “Students going to the dershane where I also go filled in a different questionnaire from the others. They even asked us the names of our dershane teachers. What will be done with this information about us in the future? Are we being profiled for attending those dershanes?”

Another high school student, İ.Ö., stated: “As I am going to a different dershane, I was asked to give my ID number and the names of my dershane teachers. We are evaluating this as profiling. It affected my morale and motivation very negatively. I wonder how this questionnaire will affect our lives in the future.”

The Federal Government of Nigeria is demanding an explanation and immediate resolution following the deportation of almost 50 Nigerian students at the Ataturk Airport in Turkey. Just after the coup, the Turkish Government had requested that 17 Turkish schools be closed down for their ties to the Gulen Movement and the Nigerian Government didn’t accept it.