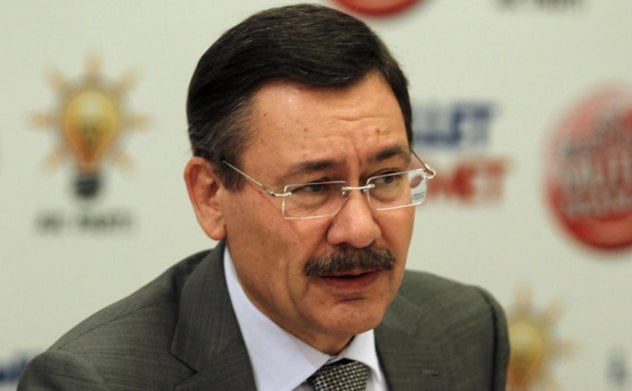 Melih Gökçek, the mayor of Turkey’s capital city Ankara, has hinted a kind of “genocide” for alleged members of faith-based Gülen movement, in an interview who gave to pro-Erdoğan Türkiye daily.

Gökçek has said that “Completely annihilating Gülen movement in Turkey will take our 10 year. In order to finish FETÖ (an acronym for the Gülenist Terror Organization frequently used by Erdoğan and pro-Erdoğan media networks with reference to the Gülen movement) completely we need to transform whole generation. Therefore, especially as government, political power and municipalities we have tried to fulfill the duties given to us.”

Gökçek is just following the footsteps of Turkey’s autocratic President Recep Tayyip Erdoğan who said on April 29, 2017 that “We conducted a huge campaign to dislodge FETÖ from the state and our lives. This has become a metastatic [cancer] all through our body that needs to be removed. What did I tell you before? We would enter their lairs. We have, but it is not over yet, there are so many lairs.”

Erdoğan had also stated on May 11, 2014 in a speech during AKP’s consultation meeting in Afyon that: “They frequently claim that the struggle against the parallel structure has turned into a witch-hunt. …yes, we will carry out this witch-hunt. … You will always report their identities and actions. I tell this to all of my citizens: You will report, and we will take action against them. We will sterilize the dirty water that has contaminated the milk either by boiling the milk or separating the molecules in the mixture.”

Erdoğan has also said during an interview he gave to Israel’s Channel 2 TV  on November 22, 2016 that “It has spread to the body like cancer cells. Currently, there is metastasis, and we have to remove these metastatic cells. If we cannot eradicate them, we cannot know when they will erupt in the future.”

According to a recently released report by Stockholm Center for Freedom (SCF), Turkey has seen an unprecedented rise in hateful speech by the nation’s political rulers, driven primarily by President Erdoğan, who uses incessant and vile speech inciting hostility, deepening divisions and expanding polarization in the 80-million-strong nation for short-term political gains.

The research done by SCF found that Erdoğan has uttered at least 240 different derogatory phrases that amount to hate speech against the Hizmet movement in a little over three years. SCF has reported that “Given the fact that each derogatory phrase and instance of hate speech has been voiced by Erdoğan dozens and even hundreds of times in various public speeches, the horrendous nature of Erdoğan’s onslaught against the Hizmet movement is worse than it appears at first glance. He entrenches the hateful narrative by repeatedly employing it in public speeches.”

The unprecedented process of vilifying and demonizing the Gülen movement was kicked off by Erdoğan, who blatantly said, “Yes, it is a witch-hunt, and we are the ones who are conducting it.” As a result, thousands of people had to leave the country for their own safety, almost 150,000 were dismissed from the civil service without any effective judicial or administrative probe, and some 50,000 had been arrested as of May 1, 2017. There were over 130,000 cases of detention in which hundreds of torture complaints were made by the UN and other credible nongovernmental organizations, and more than 75 people died under suspicious circumstances.

A failed coup attempt on July 15, 2016 killed over 240 people. Immediately after the putsch, the Justice and Development Party (AKP) government along with Turkey’s autocratic President Erdoğan pinned the blame on the Gülen movement.

Fethullah Gülen, who inspired the movement, strongly denied having any role in the failed coup and called for an international investigation into it, but President Erdoğan — calling the coup attempt “a gift from God” — and the government initiated a widespread purge aimed at cleansing sympathizers of the movement from within state institutions, dehumanizing its popular figures and putting them in custody. The Turkish government has failed to present any direct evidence linking Gülen or the movement to the abortive coup.

President Erdoğan started describing the Gülen movement as illegal structure first and later as a terrorist organization, following the expose on major corruption investigations on December 2013 that implicated Erdoğan and his family members in billions of dollars of bribes and kickbacks.

Fethullah Gülen who criticized Erdoğan and his government for corruption suddenly became a foe for Erdoğan. The fact that Gülen also remained opposed to Turkey’s interference into Syrian domestic affairs and is critical of Erdoğan’s arming and funding of radical Jihadist groups has drawn the ire of Erdoğan since 2011 when Syrian civil war started. Gülen movement has been known as a strong advocate of interfaith dialogue and science education. The movement has educational and cultural activities in over 160 countries.