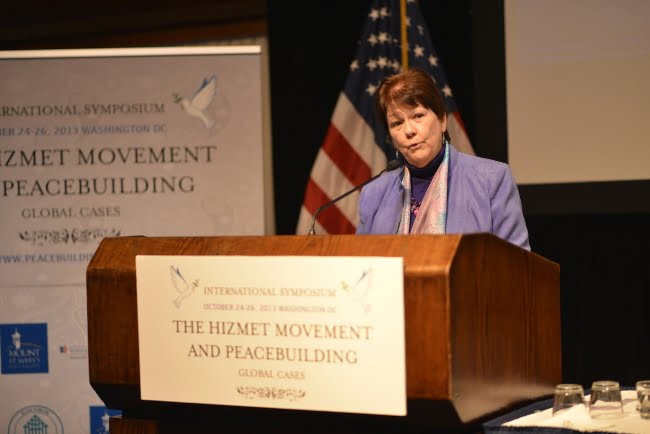 Speaking at a conference titled “The Hizmet Movement and Peacebuilding” in Washington, D.C., at the weekend, prominent professors praised peace initiatives inspired by Turkish Islamic scholar Fethullah Gülen as a great contribution to world peace.

During the symposium, organized by Georgetown University, American University, Mount St. Mary’s University and the Rumi Forum, numerous academics and scientists from more than 20 countries on six continents delivered speeches on various topics covering the impact of the Hizmet movement on society and its contributions to it as a whole.

Professor Trudy Conway from Mount St. Mary’s University in Maryland stated that there are some basic elements in the Hizmet movement that enable tolerance and dialogue. What impressed the professor greatly was that women who are members of the Hizmet movement and who studied for their doctorates delivered speeches at the conference. “Women play a great role in this movement,” Conway said, adding that she was very pleased to see that.

A professor from the University of the Incarnate Word in San Antonio, Texas, Martha Ann Kirk, shared her views on the Turkish schools established by the Hizmet movement, saying that it is very pleasant to see that, apart from giving lessons, Turkish teachers have been teaching students humanitarian values for more than 30 years. “Thanks to Turkish schools, children learn to collaborate, respecting each other and abandoning prejudices. This is a great contribution to world peace,” Kirk said.

Dr. Thomas Gage from Humboldt State University in California said that prominent figures such as Nelson Mandela, Martin Luther King, Jr. and Fethullah Gülen have worked to try and establish a better world.

The Hizmet movement has established hundreds of educational and communal organizations and institutions in more than 140 countries, most of which suffer from internal conflicts and communal divisions, including Afghanistan, Cambodia, Iraq, Kosovo, Nigeria, the Philippines, South Africa, Sudan and Tajikistan. These organizations and institutions engage in various peace-building initiatives that foster inclusiveness and create shared spaces. The symposium assessed the societal impact of these initiatives under thematic and regional categories.