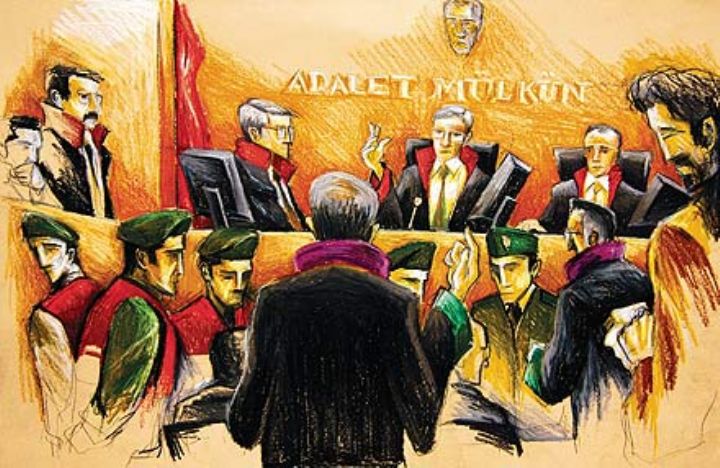 Victims of Turkey’s post-coup purge have been taking another toll from lawyers who ask outrageously high prices either to keep themselves out of trouble or to exploit from the lost causes.

A recent article published by the Globe Post news portal quoted an anonymous lawyer as claiming that some lawyers charge their clients, mostly sympathizers of the Gülen movement, from 30,000 TL to 70,000 TL per case, maybe 20-30 times expensive than usual.

“TL 250,000. Two Hundred and Fifty Thousand Turkish Liras. This is the figure (~$80k) a lawyer asked from the family of a suspect arrested in connection with the Turkish coup attempt on July 15,” read the article’s lead.

What follows is the full text of the article which also elaborated on the Turkish suspects’ legal rights which were limited under post-coup emergency rule.

“TL250.000. Two Hundred and Fifty Thousand Turkish Liras. This is the figure (~$80k) a lawyer asked from the family of a suspect arrested in connection with the Turkish coup attempt on July 15. “This is the price for being kicked out of the bar,” the lawyer justified. And there is only a slim chance that the lawyer can even meet the suspect, or get him out of the prison anytime soon.

Thousands of legal cases were launched in the aftermath of the July coup attempt across Turkey, but the due process has deteriorated significantly, raising concerns over rights of defendants in a country where people are thrown into jails on bogus and ludicrous charges. It is hard to find a lawyer, the judiciary is increasingly working under the government’s tight control and confessions after mistreatment and torture of detainees are widespread. The dismal state of the rule of law in Turkey calls into question the entire process of trials that are supposed to reveal real culprits behind the July 15 coup.

During a highly emotional farewell speech to a large audience last month, Istanbul Bar Association head Umit Kocasakal proudly acknowledged that his bar refused to provide legal representation to suspects charged with the coup. His confession illustrates how even celebrated lawyers could violate the universally accepted notion: the right to legal defense for any suspects regardless of charges they face.

Kocasakal even portrayed it as an accomplishment, a reason to be proud of, and a sacred duty to the nation. The bar association’s denial of lawyers to suspects is in line with the government’s policy of denying lawyers to prisoners, raising questions about the fundamental tenet of the justice system.

But his revelation commands attention to another problem that has largely gone unnoticed during the post-coup era. The refusal of a legal defense and the government’s crackdown on bar associations across the country are two major problematic issues in the rule of law.

Following the coup attempt, Turkey shut down the country’s largest union of jurists and detained its former chairman, Murat Aslan. Even this single incident sends a chilling message to other lawyers across the country.

Apart from dismal prison conditions and reports of credible evidence of systematic torture, the majority of detainees have an additional problem: the access to a lawyer and lack of legal defense. Turkish authorities have rounded up dozens of bar associations and so far detained heads of six associations across Turkey. Only in the central province of Konya, at least 30 lawyers were jailed while heads of bar associations in provinces of Konya, Gumushane, Siirt, Trabzon, Manisa and Erzurum, were imprisoned.

More than 200 lawyers have been arrested on terrorism and coup-related charges while there are ongoing investigations against more than 500 lawyers. The government also confiscated the property of arrested lawyers in its unabated massive wealth grab from opponents and critics.

This comes amid a larger crackdown on the judiciary. Only a day after the attempted coup on July 15, the authorities, with an arrest request from an ordinary prosecutor, dismissed and jailed more than 2,000 judges and prosecutors. Of November 1, the number has reached to 3,500, inflicting damage to the judicial system, rendering judicial independence and rule of law a dead letter. In general, more than 110,000 public officials have been purged on coup charges since July. Nearly 80,000 people have been detained, while nearly half of them were jailed pending trial.

In a toxic fear atmosphere following abortive coup on July 15, many lawyers feel too intimidated by authorities to represent sympathizers of U.S.-based cleric Fethullah Gulen and in Istanbul, the leading bar association led by Kocasakal, refuses to provide any lawyer to those who are jailed over links to the Gulen movement. Turkish government accused the cleric of masterminding the coup. Gulen denies any involvement.

Deprived of the opportunity to carry out their profession, facing threats and intimidation to represent detainees, many lawyers try to avoid trouble by declining requests for legal representation of Gulenists, lawyers from Turkey told Turkey Times. F. D., a Turkish lawyer who now lives in the U.S. and who wanted to remain anonymous to protect his family back in Turkey, once represented key figures in high profile cases in Turkey. But the level of the recent crackdown convinced him to abandon his profession in Turkey and seek refuge in the U.S. to avoid a possible imprisonment.

Some of his colleagues, who did not heed to similar calls for leaving Turkey, now ended up in jail and they  —lawyers themselves — are now unable to have a legal defense. F.D. regards targeting lawyers as revenge operations. In an example, he reveals how the selection of lists and names of lawyers by authorities for detention works out. Back then a few years ago, he was representing key figures in Turkey and said authorities now punish lawyers who represent police officers or other bureaucrats who launched the sweeping corruption investigations against the government.

In a counter move, the government purged prosecutors, judges and police chiefs that oversaw the graft probe in late 2013, and pro-government prosecutors launched investigations into certain police officers and prosecutors over charges of forming a “parallel structure” within the state. Not only those police officers and prosecutors that led the corruption investigation against cabinet members are behind bars now but also lawyers who represented them in subsequent trials engineered by the government were imprisoned. To avoid a similar fate, F.D., foreseeing what awaits him, fled the country, leaving his entire family behind.

The issue of legal defense has been an acute problem that violates the universal norm of defense for detainees. When one of the female relatives of Gulen was detained two months ago in the eastern province of Erzurum, Gulen’s hometown, not a single lawyer was brave enough to represent her. For lawyers from any background, Gulenists are hot potatoes and nobody wants to risk themselves with defending them. Those who represent Gulenists face the risk of arrest and this took place in almost every city in Turkey. Last month, the state-run Anadolu news agency proudly announced that no one took the case of Kutbeddin Gulen, Gulen’s brother. He was later arrested pending trial.

A report by Human Rights Watch (HRW) elaborated on the issue by detailing how authorities curtail detainees’ right of access to a lawyer. According to emergency decrees, the maximum length of police detention without a judicial review or court attending is extended from four to 30 days, with detainees being denied access to lawyers for up to five days. And to make matters worse, a new emergency decree issued by the government on Oct. 30 allows courts to deny lawyer to suspects kept in pre-trial detention on terrorism charges for up to 6 months. Prosecutors also can record conversations between lawyers and prisoners. They also have a right to confiscate any documents exchanged between lawyers and their clients.

In any human tragedy in history, this problem also creates a black market, a lucrative business for opportunistic lawyers who see in politically-charged cases great benefit that is worth taking a risk. F.D. says some lawyers charge their clients, Gulenists, from 30,000 TL to 70,000 TL per case, maybe 20-30 times expensive than usual.

Those lawyers, he noted, have no concern over consequences for their willingness to legally defend Gulenists. They act not out of humanitarian concerns but for business motivations.

In addition to the problem of legal defense, there is a far worse one at the core of judicial failures, a vivid symptom that announces the collapse of the entire system. In early September, the Istanbul’s 5th Civil Court of Peace rejected to release leftist author Asli Erdogan on the ground that her innocence has not been proven yet. Another court also refused to release Professor Mehmet Altan and his novelist brother Ahmet Altan on the same ground.

The logic behind the court decisions reflects an understanding of law only seen in authoritarian regimes where the universally accepted norm of “presumption of innocence” replaced with “presumption of guilt.”

Anywhere in the world where there is any semblance or real existence of the rule of law, there is a common understanding that defines the basic parameters of who is guilty and who is not. In those countries, there is ‘presumption of innocence’; a principle that requires the government to prove the guilt of a criminal defendant and relieves the defendant of any burden to prove his or her innocence. Or by the Latin expression “Ei incumbit probatio qui dicit, non qui negat” (the burden of proof is on the one who declares, not on one who denies.) This constitutes the foundation of modern law systems on identifying the criminals beyond any reasonable doubt due to well-defined laws.

But not in Turkey, the presumption of innocence has been dramatically reversed and now everybody is assumed guilty until they prove their innocence.

The Moscow show trials in 1936 that were set up to haunt enemies of people and the Communist Revolution was now a well-known episode in the Soviet history, offering a startling account of the Stalinist terror that targeted millions of ordinary people, elite members of the party, the army and intelligentsia. ‘The presumption of guilt’ was notoriously associated with the Soviet judicial system until final decades of the Cold War, and resurfaced in Turkey in aftermath of July failed coup.”