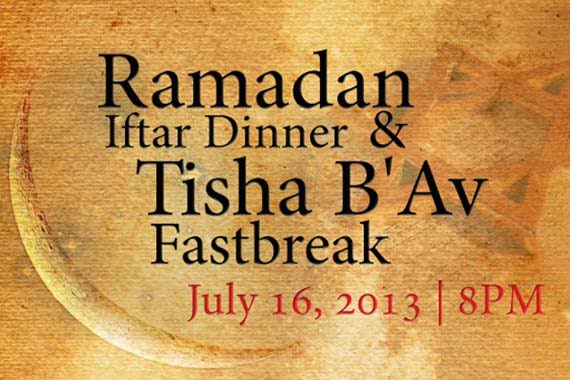 On Tuesday night, in a large, floral wallpapered room on the second floor of Congregation Beth Elohim in Park Slope, about 200 people came together for the Tisha B’Av fast break and the Ramadan iftar. Tired, thirsty, and hungry, they could have just stayed home. But they didn’t. Some brought their families, and some came alone. Jews and Muslims from all over New York City united to honor each others’ faiths, and to bond over that most universal tradition: eating.

Turkish Sufi musicians played as the crowd took their seats, which were randomly assigned as to promote conversation. The buffet was set up; one side with kosher food, the other with halal. But the hungry people would have to wait almost an hour to dig in as speakers addressed the room, explaining why this evening was so significant. “We are here to lead by example,” said Zafer Akin, president of the Peace Islands Institute. “Our values are not only similar; they’re identical,” he said.

Akin and Leonard Petlakh, executive director of the Kings Bay Y, came up with the idea together. The two are long time friends who “aren’t always on the same page, but always produce results,” Petlakh explained. They’ve organized numerous events and volunteer programs for their two communities, but tonight’s event (co-sponsored by CBE, Turkish Cultural Center Brooklyn, The Kings Bay Y, The Kings Bay Y at Windsor Terrace, and theUniversal Foundation) was the first of its kind.

It’s not every year that Ramadan and Tisha B’Av coincide—Rabbi Marc Katz called this year’s timing “fortuitous.” After the speeches, the adhan and hamotzi were both recited, and in a ravished yet orderly fashion, the fasters lined the buffet. As they ate, many attendees discussed meaningful fasts they’ve experienced (a suggested talking point on the event program). A man at my table told the group that he’d undertaken his first New York City fast at a 2011 Occupy Wall Street protest in Zuccotti Park, and others offered their own memories as well. But few needed the talking points. They conversed normally, as they would with their own families, proving the night’s mission a success.