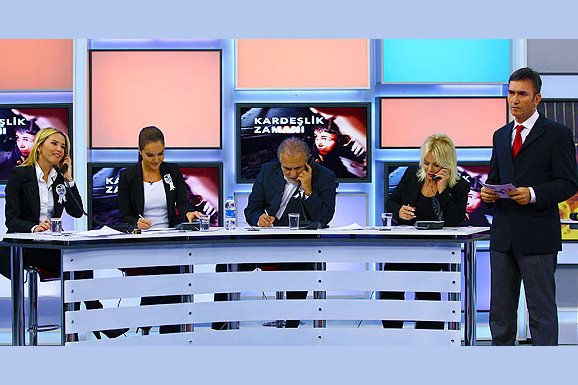 More than TL 65 million was raised in a special telethon organized by the Samanyolu Media Group and Turkish charity foundation Kimse Yok Mu (Is Anybody There) on Tuesday night for the victims of Sunday’s massive earthquake in eastern Turkey, according to a Cihan news agency report.

A total of TL 65,056,527 was donated during a live fundraising telecast on local Samonyolu TV channels and radio stations. More than 9,000 people reached out in support of the earthquake victims by sending SMS text messages during the telethon. The show was hosted by Gezegen Mehmet, a famous radio personality.

Many well-known political, arts and sports figures demonstrated their support for eastern Turkey through both financial contributions and their participation in the telethon, where they answered calls flooding in throughout the night.

Mehmet said all of the celebrities that participated had immediately accepted the invitation to join the telethon without hesitation.

Of all the important names in the worlds of business, politics, sports and the arts reaching out to the people of Van, the greatest donation came from leading Turkish construction company FİYAPI. Board Chairman Fikret İnan announced during the telethon that FİYAPI will provide TL 35 million in construction materials for the building of 500 apartments in Van.

Audiences were touched by a group of young children who had emptied their money boxes to donate TL 3,500 to the fundraising appeal.

Kimse Yok Mu President Ünal Öztürk called into the telethon from Van, where he said the Turkish charity has been active in relief efforts in the aftermath of the earthquake on Sunday.

Kanal D and ATV teamed up for a similar aid program, titled “One Heart for Van,” that aired on Wednesday night. Familiar faces from popular Turkish TV series and shows joined the telethon. Proceeds from the campaign will be donated to Prime Minister Recep Tayyıp Erdoğan’s “Van Earthquake Humanitarian Assistance” fund.

Sports clubs and associations such as WTA, Real Madrid and Liverpool, Grammy Award-winning celebrities such as Rihanna, and countless world leaders have extended their condolences and expressed their solidarity with the Turkish people as all of Turkey — NGOs, business groups, celebrities and even students from Somalia — and other nations around the world rushed to help Van recover from this natural disaster.

More than 4,000 medical teams from across Turkey have arrived in Van, where they have been very busy treating the injured, the Anatolia news agency reported on Wednesday.

The Board of Directors of the Ankara Chamber of Commerce (ATO) authorized a fund of TL 500,000 after an extraordinary meeting held on Wednesday to discuss the emergency needs of the citizens of Van. ATO President Salih Bezci said the board will be in contact every day as expenditures will be made based on what the region needs. “Our hands and hearts will be in the disaster area. The ATO is willing to do whatever is necessary,” Bezci said.

Fifteen Somali students at Manisa Şehzade Mehmet Primary School and 15 at Soma Union College, who had traveled from their own war-torn and famine-stricken homeland to study in Turkey on scholarships, have pledged TL 4,500 from their own scholarships and pocket money to help students in Van. The Somali students will forward their donations through Kimse Yok Mu’s Manisa branch to their peers in eastern Turkey. The students commented that they were grateful for the generosity of the Van Girls Orphanage, which had collected aid for Somalia during the holy Islamic month of Ramadan.

One of the Somali students, Abdurrahman Muhammed, who has 17 siblings in Somalia, told Cihan that he was very upset to learn of the quake in Van. “Many students in Van and from all over Turkey provided us with aid. Now it’s our turn. We also want to help the students in Van,” he said.

The Turkish Red Crescent (Kızılay) on Monday sent tents and blankets to Van in the wake of the devastating 7.2-magnitude quake. The charity group announced in a written statement that it had a staff of 96 currently in the disaster zone to set up 3,757 tents. In addition to 24 Kızılay staff members already working in the disaster zone, the aid organization has sent a further 72 team members to assist in relief efforts.