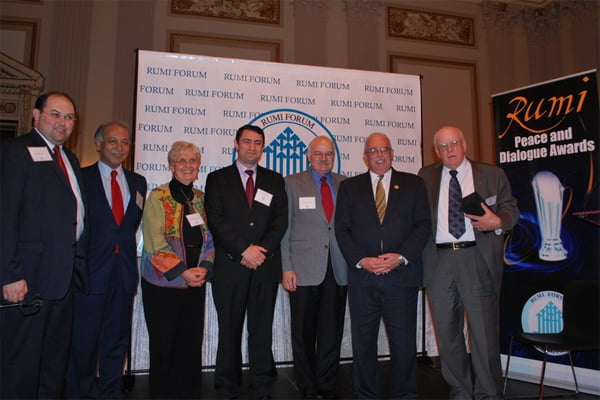 House Judiciary Committee Chairman John Conyers called on US President Barack Obama not to send additional troops to Afghanistan in his speech at the award ceremony, adding: “You cannot get peace by winning wars. … There is no military victory in Iraq, Afghanistan or anywhere else.”

Congressman Connolly praised the activities of the Rumi Forum, saying, “If there is something that I think is important and that is represented by this forum tonight and the work of the Rumi Forum, it is the ability it has to bind us all in tolerance and understanding.” Congressman Mike McMahon of New York described the protocols signed between Armenia and Turkey for the normalization of their diplomatic ties and the opening of their border as historic.

Several attendees speaking at the award ceremony expressed their support and admiration for the honorary president of the Rumi Forum, Fethullah Gülen, a renowned Islamic scholar advocating increased interfaith dialogue. “He is not only working hard to teach us respect for one another but also the necessity of learning more about one another,” Professor Griffith said of Gülen.

Great interest in the ceremony from congressmen

The engagement and integration to the larger society is very crucial for Muslims. There are many good qualities in secular societies which are Islamic such as right of education, freedom and housing. We should value them and play our part.