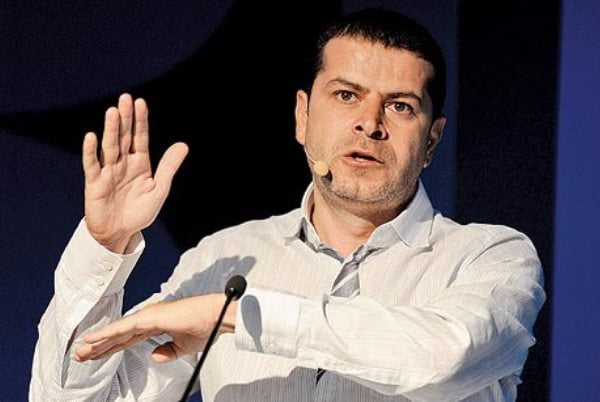 Seasoned journalist Cüneyt Özdemir has said he was threatened by two members of pro-government media outlets and pressured to jump on the bandwagon by lashing out at the Hizmet movement and hosting a commentator who Özdemir said is a staunch supporter of conspiracy theories.
In his column in the Radikal daily on Wednesday, Özdemir said that in one phone conversation a columnist, whose name he didn’t divulge, said he had seen some investigation files against Özdemir and that he would be in trouble if he continued to act uncompromisingly. “When he saw that I was totally uninterested in his threats, this time he told me that my name was included in a Prime Ministry Inspection Board report. When I asked how my name was mentioned there, he said, ‘I saw that you were conned by Hizmet, and I personally saw the report’,” wrote Özdemir.

Özdemir’s response to this columnist was to ask why a Prime Ministry report would use a slang word such as “conned” and how a columnist could see it. There was a moment of silence, wrote Özdemir, adding that the fanatical columnist then continued his threats.

Özdemir said the threats had begun to materialize when a pro-government newspaper started writing fabricated stories about him a couple of days ago.

Since a corruption probe became public on Dec. 17, 2013, with the detentions of 52 businessmen and state officials as well the sons of some ministers, the government kicked off a smear campaign against the Hizmet movement, a volunteer-based grassroots movement to spread interfaith dialogue across the world, with a particular emphasis on education, to create a phantom villain as a means to distract attention from the investigations. Prime Minister Recep Tayyip Erdoğan created the term “parallel structure” to refer to officials within the state who share the ideals of the Hizmet movement and accused them of an assault on democracy by exposing his government’s faults. Representatives of the Hizmet movement clearly rejected these claims and denied any involvement with the process, while calling on the government not to intervene in the operation of the judiciary.

Özdemir openly stated in his column that he is completely neutral in this row between the government and the Hizmet movement but that the government does not tolerate even his neutrality but forces him, as it does with other journalists, to take sides with it and join the chorus of press outlets that constantly lash out at the Hizmet movement and its institutions. “They [the government] want us to host their most hawkish men on the show [his program, 5N1K, on CNN Türk], to write whatever they want and put our minds and consciences on the shelf,” Özdemir asserted.

He also told the story of an insistent call from another columnist, who sent a text message to him and asked him to host a pro-government writer on the show. He said he thought about inviting him and started searching for another person with an opposing view, but none of the people he asked to counter this columnist in front of the cameras were willing to argue with the man. “His respectability was even less than zero. When I said this, the messages became more frequent and the warnings increased,” Özdemir noted. He asked from where these pro-government media members had found the courage and insolence to hurl threats, immediately providing an answer to his own question by recalling the so-called “Alo Fatih hotline” between Erdoğan and Fatih Saraç, deputy chairman of the Ciner Media Group, which owns the Habertürk newspaper and TV channel.

In leaked but legally wiretapped phone conversations, Erdoğan calls Saraç frequently to order the removal or blocking of stories that might harm his government’s reputation or serve the interests of opposition parties.

“If Turkey is below even Gambia and Iraq in the global league of press freedom, this didn’t happen in one day,” he wrote, recalling several incidents when Erdoğan personally lambasted him in public speeches for one of his articles in Radikal and for hosting a glue-sniffer after the prime minister insulted such addicts. “Shame on you,” Erdoğan recently shouted about Özdemir at a public rally, calling on the owner of the paper to fire him.

Özdemir concluded that the new Internet law, which he mocked by labeling it “the Alo TİB hotline,” TİB referring to the Telecommunications Directorate, will likely render the need to hurl insults and threats at journalists obsolete. The law grants TİB the authority to remove any content from the Internet within four hours after receiving a complaint, without seeking a prior court order.

EKREM DUMANLI, Sunday April 22, 2012 Once upon a time, people used to have faith in some papers, which have become famous because of their meticulous journalism, and to read their columns and opinion pieces with great admiration and attention. These papers actually deserved this attention and interest because they were objective, free of ideological […]